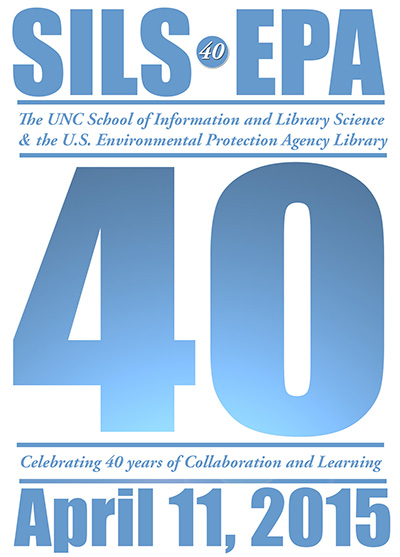 SILS and the U.S. Environmental Protection Agency (EPA) Research Triangle Park (RTP) Library celebrated 40 years of collaboration, education, and experience on April 11, 2015. Current and former interns and staff members of the EPA-RTP Library and SILS faculty and administrators gathered at the Carolina Club to help commemorate the milestone.

Gary Marchionini, SILS Dean and Cary C. Boshamer Distinguished Professor, and Deborah Balsamo (MSLS ’97), National Program Manager for the EPA’s National Library Network and former director of the EPA-RT P Library, welcomed the crowd and discussed the history and importance of the program. Several alumni and former staff also shared their memories of working in the Library.

SILS has operated the EPA-RTP Library for 40 years and more than 300 graduate students have served as interns. Upon completing their master’s studies, those interns have gone on to become leaders in libraries and the information industry. In December 2014, SILS was awarded a new contract to continue operating the Library for the next five years.

“This contract represents a highly effective and efficient partnership between a public university and a government research organization,” Dean Marchionini said. “SILS attracts experienced librarians to manage the EPA Library operations and the internships attract outstanding students to UNC-Chapel Hill. These interns not only gain practical experience in a full-service research library, but also work with library professionals to create new kinds of services to support EPA scientists and staff.”

Celebrating 40 years with 40 days of facts, photos, and memories.

The UNC-Chapel Hill School of Information and Library Science and the Environmental Protection Agency Library at Research Triangle Park are commemorating 40 years of collaboration, education, and experience. Each day for the next 40 days, counting down to the celebration on April 11, we’ll be sharing fun facts, photos, and memories. 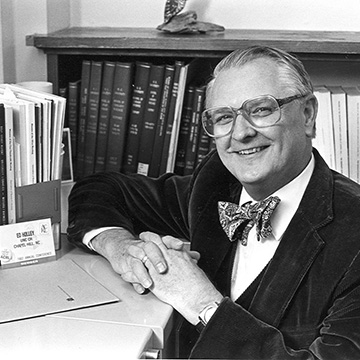 Dean Edward Holley and the leaders of the EPA established the initial partnership between the UNC-CH School of Library Science and the EPA Library in RTP.

The EPA Library internships originated 40 years ago when a federal hiring freeze prompted the EPA to look for alternative staffing approaches for the library in RTP, which led to the unique partnership with the UNC-CH School of Library Science.

Who remembers the name of the newsletter for former EPA interns and staff in the 70s and early 80s? Hint: it eventually added the tagline “Reaching Out to Former Employees.”

Answer: “The EPA Tentacle” newsletter reported new developments at the EPA Library and what former interns and staff were doing.

In 1976, the EPA Library in RTP absorbed many responsibilities of the recently dissolved Air Pollution Technical Information Center (APTIC), resulting in the establishment of the Air Information Center (AIC) and significant changes to the services provided by library interns and staff.

In 1977, “The Tentacle” newsletter reported that the EPA Library had taken over disseminating Public Affairs pamphlets such as “Fun with the Environment” and “Let’s Dump the Dump.”

The Summer 1978 edition of the NCSLA Bulletin reported that video equipment for the slow-scan TV/ tele facsimile experiment had arrived at the EPA Library in July. The equipment was supposed to allow ILL requests to be transmitted via satellite and printed in hardcopy. According to the NCSLA article, the hope was that “the use of such equipment for transmission, communication, and exchange of information will promote and facilitate sharing of informational resources and will foment new and imaginative kinds of resource sharing.”

SILS Alumnus David Jensen was both an EPA intern and later a supervisor who had the privilege of interviewing interns for the following year. Jensen remembers all the interns were “top notch - bright, energetic and terrific colleagues.”

Dean Edward G. Holley hired Dr. Herman Henkle, retired director of a large special library and a past president of the Special Libraries Association (SLA), to teach the special libraries seminar and advise the EPA Library internship program in its early years.

Two students have written master’s papers reviewing the EPA Library internship program. The first was Rosemary K. Thorn, who wrote "A Description and Evaluation of the UNC EPA Library Internship Program" in 1980. 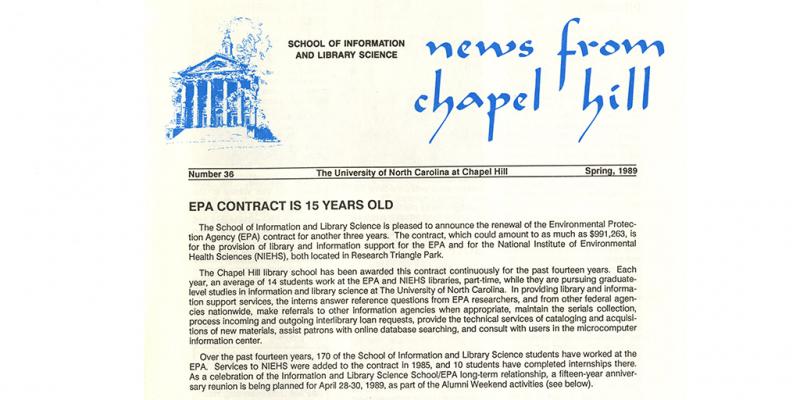 By 1989, 170 students had served as interns at the EPA Library, and the program was averaging about 14 students per year. The 15-year milestone was celebrated in the Spring 1989 “News From Chapel Hill” newsletter. 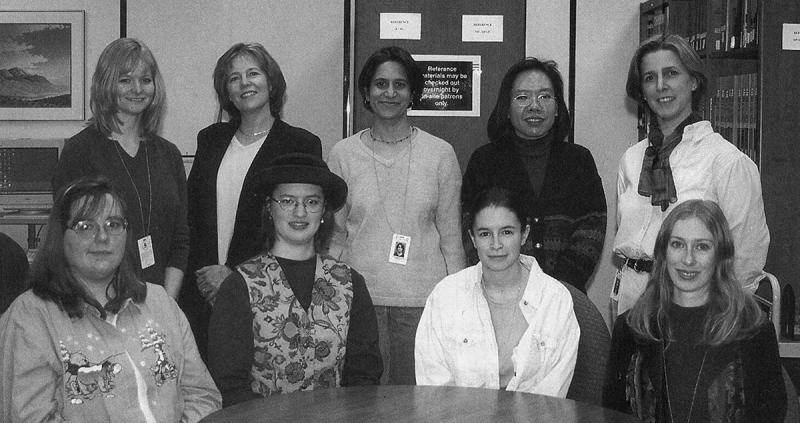 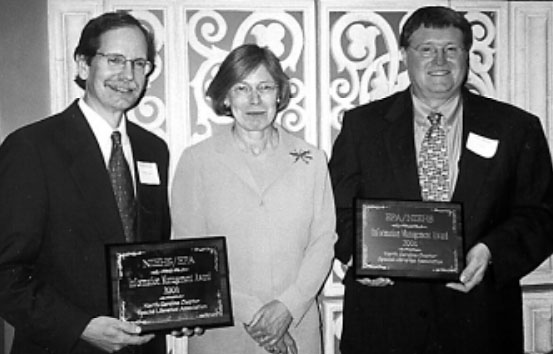 In 2001, the EPA and National Institute of Environmental Health Sciences (NIEHS) Libraries in RTP were presented the NC Chapter of the Special Libraries Association Information Management Award. Pictured at right: Dav Robertson (MSLS ’75), NIEHS library director (left), and John Knight, federal library director with the U.S. EPA (right), display the plaques awarded to them by Barbara Post, (MSLS ’79). Both Post and Roberston were EPA Library interns.

Adina Riggins (’01) says her EPA Library internship from June 1999-December 2000 was a “great, positive work and educational experience. Deborah Balsamo was a wonderful mentor and very helpful when I was applying for professional archival positions. She spoke frankly about what she was able to observe about my work at the EPA Library that would be helpful in academic librarianship and even in archives!” 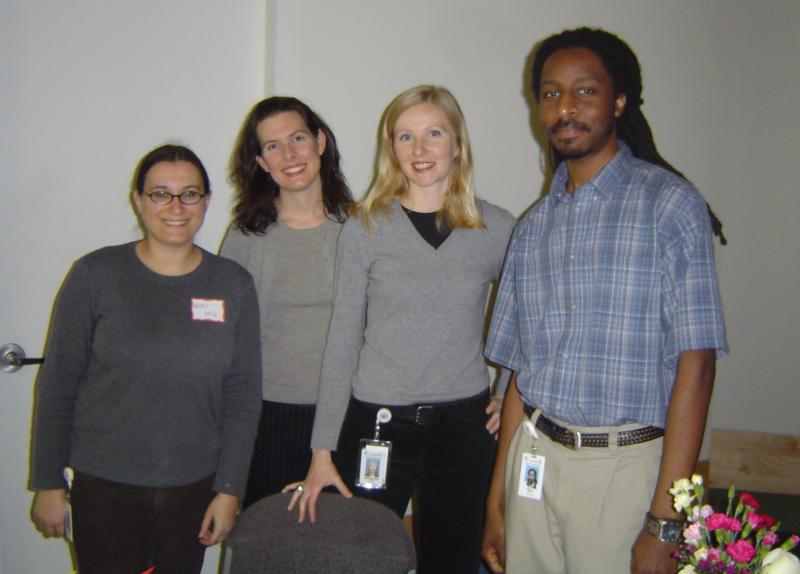 A reunion celebrating the 30-year relationships between UNC SILS and the EPA Library drew a crowd of more than 70 on Saturday, March 19, 2005. Pictured at right: EPA interns Mary Gabehart and Rebecca Pappert, EPA Library Director April Errickson, and EPA intern  Haley Hall at the reunion. 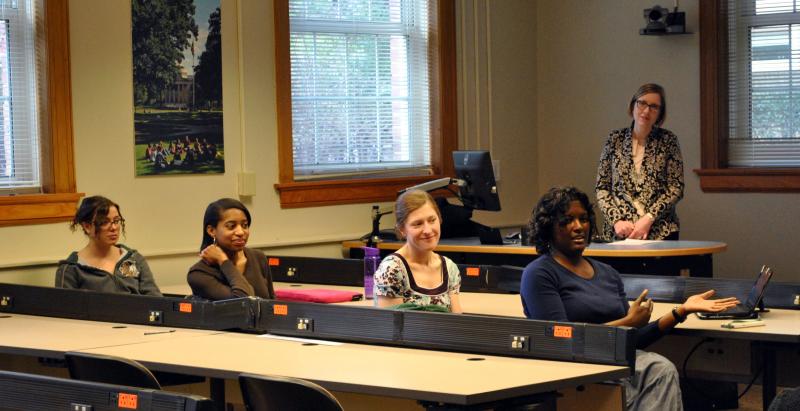 During her EPA Library internship, Adina Riggins (’01) fondly recalls that in the tech services area of the old building, interns and staff shared photos of pets. She also remembers the smell of the delicious cinnamon rolls in the cafeteria of the NC Mutual Building back when OAQPS was housed there. 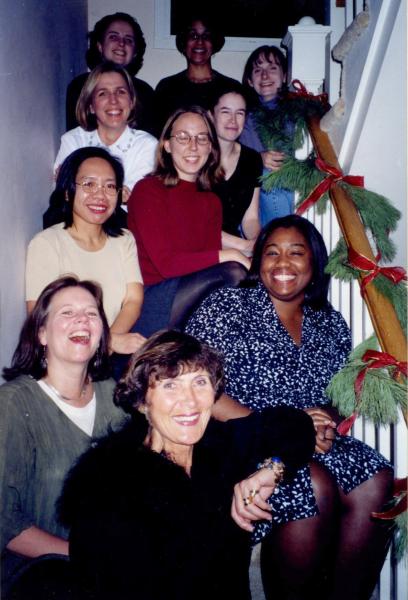 In 2001, the EPA Library staff and interns began preparations to move to the new EPA facility.

The EPA-RTP complex, where the EPA Library relocated in 2002, boasted many state-of-the-art features, including the longest stretch of solar-powered roadway in America and status as a “green building” that was 40% more energy efficient than buildings of standard design. 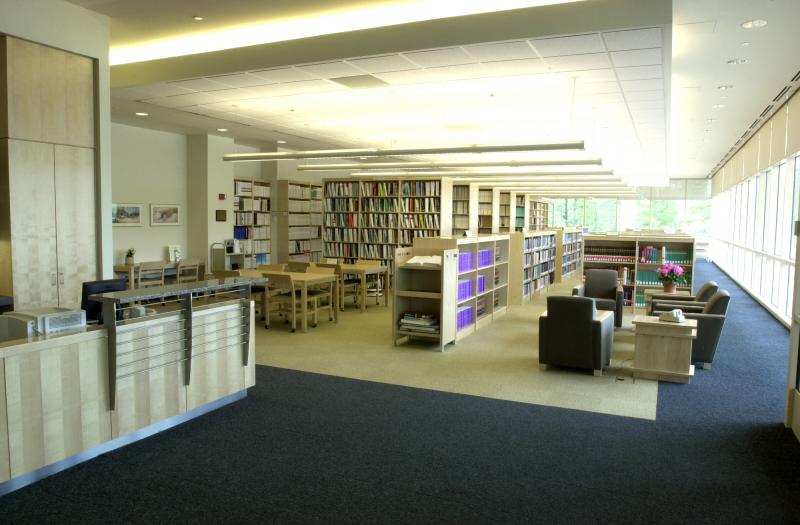 When its relocation to the new EPA-RTP complex was complete in 2002, the EPA Library had a beautiful, light-filled space in the administrative tower adjacent to the main entrance. The location was strategically chosen to be a gathering place for scientists and staff to meet and exchange ideas. 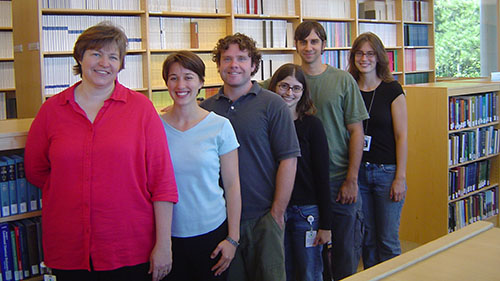 Betsy Appleton (MSLS 2007), who interned with the NIEHS in 2006-07, says she learned a great deal from the librarians on staff, particularly Ellen Leadem. “I remember her fondly and know she is missed in so many ways,” Appleton said.

More than 350 SILS students have gained valuable experience as EPA Library interns during the past 40 years.

In RTP, at the EPA’s largest research facility, investigators focus on air pollution and its effects on human health and the ecosystem. The EPA Library’s collections and services provide interns with exposure to and experience with a wide range of materials, including biomedical, toxicological, and chemical information, engineering literature, government documents, and basic business and computer information.

The EPA Library in RTP is one of only three EPA repository libraries nationwide, and the only EPA library staffed by contract-based university employees

The EPA Library in RTP is home to an extensive collection of information with a particular focus on air pollution with emphases on chemical toxicity, chemistry, meteorology, geophysics and related sciences.

The SILS and EPA Library celebration is less than a week away. If you are planning to attend and have not yet RSVP'd, please do so by sending an email to silsreunion@unc.edu today. Thanks!

In December 2014, SILS was awarded the largest contract in the school’s history to operate the EPA-RTP Library and manage the library’s subscriptions for the next five years.

The reunion celebration is tomorrow! Directions to the Carolina Club and parking information can be found at http://www.clubcorp.com/…/Caroli…/Our-Story/Directions-Hours

About 70 current and former interns and staff members of the EPA-RTP Library and SILS faculty and administrators gathered at the Carolina Club to celebrate. Click through photos from the event at https://www.flickr.com/phot…/uncsils/sets/72157651950158762/.

If you have a photo, memory, or fact you'd like to share about the EPA Library, please send an e-mail to contactsils@unc.edu.

SILS Career Services Director Lori Haight receives Best Practices Award / Innovation Award From Carolina Career Community
June 3, 2022
SILS Remembers Professor Claudia Gollop
May 11, 2022
New Carolina center to craft public policy for a better internet
April 21, 2022
More News
"I remember nearly every SILS faculty member constantly reminding us about the importance of understanding the users’ perspective. SILS made it second-nature for me to keep in mind what the end user is thinking, which gives me an advantage in the workplace."
-Harry Ahlas (MSIS'01)