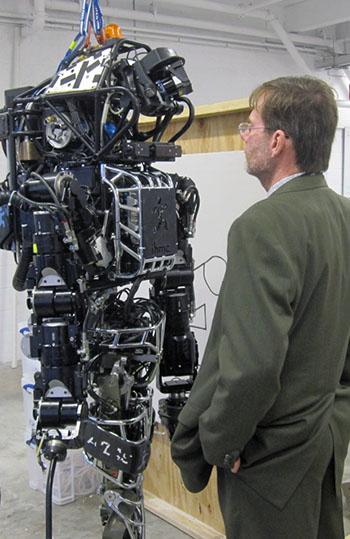 Mark Gubrud, PhD, a member of the International Committee for Robot Arms Control, will deliver a talk titled “Autonomous Weapons: Information Technology and the Arms Race” at 6 p.m. April 7 in Manning Hall 209. A Q&A session and brief reception will follow. The talk is sponsored by the UNC School of Information and Library Science (SILS), the UNC Curriculum in Peace, War, and Defense (PWAD), and the Triangle Institute for Security Studies (TISS).

Gubrud will discuss how the issue of autonomous weapon systems (AWS), also known popularly as “killer robots,” has risen to prominence over the past two years. The United States has a declared policy to develop, acquire and use AWS, which it defines as weapon systems which “once activated, can select and engage targets without further human intervention.”  Along with other nations, the US is vigorously exploring the possibilities of lethal autonomous systems. Developments in this area are eagerly followed by the public and proudly displayed by corporate and military roboticists and weapons developers.

At the same time, a growing campaign is calling for a preemptive ban on autonomous weapon systems. The issue has been taken up in diplomatic fora, including the 118-member Convention on Certain Conventional Weapons, which will conduct its second Meeting of Experts on the topic in April.

Gubrud will discuss how, with a combination of technological progress and shifting power relationships, the major powers seem to be drifting into a new strategic arms race, one in which AWS are likely to play a central role. He will clarify the nature of current US policy and apparent global responses to it. He will explore how strong moral principles support a ban on machine decision in the use of violent force, and how such a ban could be implemented as a practical arms control measure.

Bio: Mark Gubrud completed his PhD in low-temperature, quantum computing and nanoscale experimental physics, has taught physics at UNC, and was a postdoc in the Program on Science and Global Security at Princeton. He is a member of the International Committee for Robot Arms Control, and was one of the first to propose a ban on autonomous weapons as an arms control objective.

Photo: Mark Gubrud at the DARPA Robotics Challenge event in Miami in December 2013.