When describing SILS, I often point out that the name of our school is information and library science–with the science being singular. We have a rich and varied tradition, but a singular and integrated mission to educate the best information professionals in the world. The “science” part of library and of information emanates from 20th century movement toward systems thinking in most aspects of life and scholarship.  Here, I trace some of the history of information science with an eye on the 21st century movement toward the more fundamental and directly named field of information.The term “the information society” has been used for more than a half century and the field we know as “information science” has roots going back to the end of the 19th century when Paul Otlet and Henri La Fontaine founded the documentation movement in Europe. This movement shifted the focus of librarians from collecting historical knowledge sources to systematic management of those sources and reflected the development of scientific management practices (Taylorism) in industry. Just as the term “library economy” was used by Melvil Dewey and others to describe the operational aspects of library education, documentation emphasized new classification techniques and applications of technologies such as typewriters and micrographics to information management.  S.R. Ranganathan and others began using the term library science to indicate systematic library management techniques and education.

The development of telephone systems, mass production industries, and international corporations drove the need for new information management techniques and professionals in the first half of the 20th century.  By 1937, Watson Davis and others in the U.S. founded the American Documentation Institute, which later became the American Society for Information Science. Global enterprise and especially the effects of World War II led to an explosion of information processing and management breakthroughs. The development of information theory by scientists like Alan Turing and Norbert Wiener led to analog and digital computers in the 1940s. The war drove advances in communications and intelligence gathering, management, and interpretation (cryptography, and statistical modeling that preluded data mining) as well as information control techniques (operations research) to manage huge numbers of people and supplies moving around the entire planet.

Vannevar Bush’s 1945 vision of the Memex based on microform technology gave prelude to hypertext and the WWW. Claude Shannon’s seminal work on information, The Mathematical Theory of Communication, was published in 1948 and served as the base for information theory. Shannon’s work defined information as the amount of uncertainty reduced by a message, the bit (binary unit) as the fundamental unit of information, and the maximum capacity (bandwidth) of communication channels.

Meanwhile, the documentation field continued to develop in Europe and the U.S. led by pioneers such as Mortimer Taube, who promoted the use of “mission-oriented” classification for scientific information management and invented coordinate indexing, and Hans Peter Luhn, who wrote one of the early papers on using computers to retrieve information in 1953 and invented Key Word in Context (KWIC) indexing. Inspired by the work of communication theorists such as Derek de Sola Price, Eugene Garfield developed citation indexes for scientific documents and launched the Institute for Scientific Information (ISI) in 1956.

Large research libraries such as the Library of Congress and the National Library of Medicine (NLM) in the U.S. began investing in computers and people to automate some library operations. Winifred Sewell began a series of revisions to the Medical Subject Headings (MeSH) in 1959 for the NLM, and Henriette Avram led the development of the MARC and RECON projects at the Library of Congress through the 1960’s and 1970’s.  ARPANET was formed in 1965, which was the precursor to the Internet.  The MEDical Literature Analysis and Retrieval Systems (MEDLARS, now MEDLINE) and the Educational Resources Information Center (ERIC) were established in 1964, and Fred Kilgour founded Online Computer Library Center (OCLC) in 1967, which leveraged computers and networking to share cataloging data.

Throughout the 1960’s, information continued to acquire more meanings and permeate popular culture (Michael Buckland retrospectively distinguished these distinct meanings--information as thing, information as communication act, and information as knowledge in the mind–in a 1991 JASIS paper).  Fritz Malchup’s (1962) classic work “The Production and Distribution of Knowledge in the United States,” influenced the use of the term ‘information society’ and scholars from many different disciplines began to migrate to library schools and research institutes that studied information science. Scholars like Gerard Salton in the U.S. invented information retrieval techniques such as vector representations for documents and queries that allowed ranked retrieval rather than earlier Boolean-based retrieval.  In Europe at this time, scholars like Karen Sparck Jones pioneered natural language approaches to information retrieval and invented fundamental concepts like inverse document frequency (IDF).

The information science trends in the 1970’s and 1980’s saw increasing applications of technology to information problems, the automation of libraries (e.g., online public access catalogs [OPACs]) and other information-intensive enterprises and the development of personal computers and database management software.  The intellectual trend of these decades was toward human-centered theory and services.  Robert Taylor’s work on different levels of human information need (visceral, conscious, formalized, and compromised) published in 1968 reflected the importance of considering the information seeker in the overall information system.  Scholars such as Marcia Bates, Tefko Saracevic, Patrick Wilson, and Nick Belkin leveraged theory from the social sciences to propose models of information seeking centered on human needs and characteristics. Many library schools in North America added information science to their name and added information science masters programs to complement their existing library science programs, while some library science programs closed (e.g., Columbia, Chicago). The UNC-Chapel Hill School of Library Science changed its name to the School of Information and Library Science and launched its MSIS program in 1988.

The 1990’s saw a rebirth of interest in libraries and expansion of information science research and practice. The development of the Internet and the World Wide Web stimulated recognition of the importance of information and library science techniques for managing the flood of Web pages and online databases. Libraries moved from bibliographic databases to full-text databases and OPACs became more integrated across library resources. Information science programs expanded to educate database administrators, Web masters, information architects, and usability specialists. The WWW and other technologies have blurred distinctions between professional boundaries just as the post-WW II explosion of ideas had blurred boundaries between different characteristics of information. By the time the new millennium dawned, information professionals were moving into leadership positions in all sectors of society with titles like chief information officer (CIO), user experience architect, and data curator. Some schools began changing their names to reflect this more general name for the field (e.g., information science, information studies, information).

By 2003, the iSchool Consortium was formed with 10 prominent information science programs, including SILS. Some of these schools are called information schools or schools of information (iSchools), some have information science, information studies, library science, or informatics in their names. This is not so much a Tower of Babel problem as a sign of growth and renewal for our schools.  Today, there are 65 iSchools around the globe with more than half outside North America. Our field continues to advance and evolve and information as a phenomenon continues to acquire new meanings and applications. For example, I have argued that the WWW, social media, and behavioral economics give rise to a new kind of information that defines our personal identities in cyberspace (proflections), thus augmenting the three classic senses of information.

Information is itself a fundamental phenomenon of interest and stands alone. Schools of information stand alone as meaningful and substantive entities that are critical to the education of scholars and practitioners who work across a wide range of enterprises. It is an exciting time for our field and our professions regardless of the current name we give to our programs.  The School of Information and Library Science at UNC is the iSchool at Chapel Hill and we continue to be devoted to the phenomenon of information and the wide range of professional opportunities that lie ahead for our students and alumni. 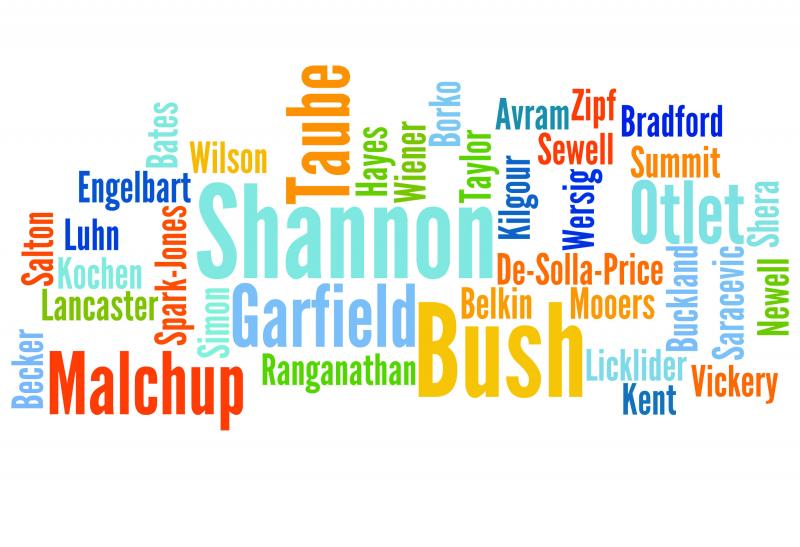