Bestselling pop-up artist and engineer Reinhart has designed a 30th anniversary commemorative edition that comes packed with a variety of novelty features--pop-ups, working light sabers, pull tabs, and other interactive looks at the exciting and popular movies. 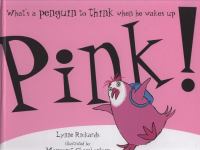 Patrick wakes up one day to find he's turned pink overnight. What will his friends think? Poor Patrick runs away in search of pink playmates. He crosses the ocean where he finds some flamingos - but will he ever fit in with them? Patrick soon learns that friendship is never black and white, but that real friends will accept you whatever. A heart-warming story of learning to be different. 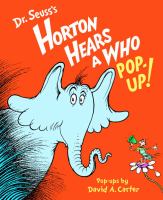 This pop-up adaptation of the popular Seuss story is published in conjunction with the release of the long-awaited animated feature film, Horton Hears a Who! Unlike other pop-up adaptations that use text abridgments, this book contains the complete text of Horton Hears a Who! David A. Carter has skillfully followed Seuss?s signature pacing by alternating five big, blow-out pop-ups with 11 booklets, pull tabs galore, and many special effects. In all, ten glorious spreads bring this classic to life in magnificent full color. Also available in a deluxe limited edition with a special pop-up, a full-cloth binding and full-cloth slipcase, signed and numbered by David A. Carter. 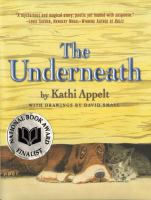 Abandoned and about to have kittens, a calico cat is befriended by a hound dog who urges her to raise her kittens underneath the porch of his owner's house, where they will be safe--as long as they stay in the Underneath. This harrowing yet sweet story is a tale about the power of love and hate. Illustrations.

Deem, James M. Bodies from the ice: melting glaciers and the recovery of the past. Boston: Houghton Mifflin, 2008. 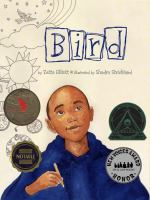 An African American boy nicknamed Bird uses drawing as a creative outlet as he struggles to make sense of his grandfather's death and his brother's drug addiction.

Bod is an unusual boy who inhabits an unusual place--he's the only living resident of a graveyard. Raised from infancy by the ghosts, werewolves, and other cemetery denizens, Bod has learned the antiquated customs of his guardians' time as well as their timely ghostly teachings--like the ability to Fade. Can a boy raised by ghosts face the wonders and terrors of the worlds of both the living and the dead? And then there are things like ghouls that aren't really one thing or the other. This chilling tale is Neil Gaiman's first full-length novel for middle-grade readers since the internationally bestselling and universally acclaimed Coraline. Like Coraline, this book is sure to enchant and surprise young readers as well as Neil Gaiman's legion of adult fans. 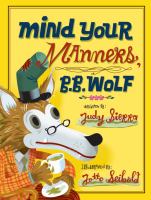 BIG BAD WOLF, now old and residing in the Villain Villa Senior Center, is invited to a tea by a children's librarian. His best friend, a toothsome crocodile, warns him that he will have to mind his manners. B. B. Wolf makes up a song: "Sip your tea and never slurp, say 'excuse me' if you burp. Smile and have a lot of fun, but don't go biting anyone." He remembers to say "please" and "thank you" and he gives a nervous Red Ridinghood, Three Little Pigs, and Gingerbread Boy his biggest smile ever, but when his stomach starts to gurgle, he gets a little mixed-up about what to do when you burp. This hilarious read-aloud story is a gentle reminder for children still learning their manners.

Here is the key to the house In the house burns a light In that light rests a bed On that bed waits a book...A spare, patterned text and glowing pictures explore the origins of light that make a house a home in this bedtime book for young children. Naming nighttime things that are both comforting and intriguing to preschoolers--a key, a bed, the moon-this timeless book illuminates a reassuring order to the universe.

Tafolla, Carmen & Amy Córdova. What can you do with a rebozo? Berkeley, CA: Tricycle Press, 2008. 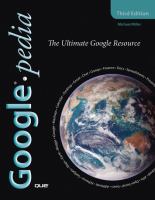 Author Miller, who specializes in writing about technical topics for non-technical readers, offers an exhaustive reference on all things Google--and how to use them. In this third edition, the author explores the wealth of Google products, from the practical applications to the just plain fun features. Topics include Google Chrome, AdSense and AdWords, blogging and creating blogs, Gmail, three-dimensional maps, YouTube, and other features and applications.

Willems, Mo. Are you ready to play outside? New York: Hyperion Books for Children, 2008. 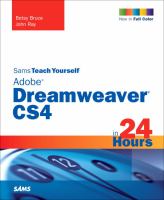 Dreamweaver CS4 is Adobe's latest release of its HTML editor and Web application development program. Illustrated with numerous screen shots and clearly written, this manual includes both background information and straightforward instruction on the features and capacilities of CS4. Topics include: designing simple and advanced Web pages, creating cascading style sheets, developing an interactive Web site, and incorporating Flash files and other multimedia into Web sites. Authors Bruce (consultant and Adobe-certified instructor) and Ray (senior business analyst and developer for the Ohio State U. Research Foundation) also include quizzes and exercises at the conclusion of each chapter.

De las Casas, Dianne. The story biz handbook: how to manage your storytelling career from the desk to the stage. Westport, Conn.: Libraries Unlimited, 2008. 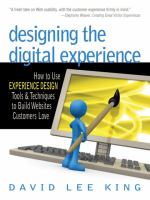 While many web development guides concentrate on the software applications needed to build sites, this book takes a look at "experience design" and why developers should think more about ease of use than a multitude of technological features. King, the Digital Branch Manager of the Topeka & Shawnee County Library in Kansas, has written this book for web developers who are looking to enhance the customer's experience with ordering and browsing online, stressing the fact that Internet consumers are looking for a pleasant and positive shopping environment as well as bargains. The guide is divided into three sections that explore the structure, sense of community and customer focus of websites, and how viral marketing and customer journey mapping are revolutionizing online shopping.

The ongoing movement to electronic collections presents many exciting new service opportunities for libraries, as well as creating materials management, resource, and service challenges. This book looks at how online resources are causing the roles and practices of libraries to change. This book looks at new practices in managing electronic materials. It considers changes to practice which libraries, e-materials providers and software provider need to make together to meet the challenges and maximize the benefits of electronic materials. The book focuses on better integrated and more automated approaches which are becoming essential to provide more complete and seamless access to library materials. 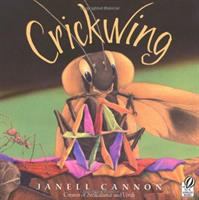 Crickwing never set out to be a bully--he wanted only to create his art in peace. But the little cockroach is an easy target for the bigger creatures in the forest. In his frustration he decides to even the score by bullying the leafcutter ants. They're just so easy to pick on.Big mistake. Nobody angers the leafcutter queen and gets away with it.