Battles, David M. The history of public library access for African Americans in the South, or, Leaving behind the plow. Lanham, Md.: Scarecrow Press, 2009. 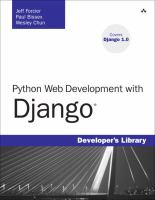 Forcier, Bissex, and Chun--all experienced Django and Python developers--offer a practical guide for Web developers on the use of the Python-based Django framework to build powerful Web solutions. Coverage includes an introductory overview of Python, Django, and Web development concepts, followed by the basic components of the framework--models, views, templates--and how they work together; discussion of four distinct Django applications; and advanced Django techniques and features. A companion website contains a large amount of auxiliary material and is referenced throughout the text. 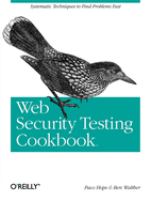 In this book for Web application developers and quality assurance testers rather than security specialists like the authors, 'recipes' are given for using free and customizable tools for building and testing secure software. Progressively more difficult problems with the tools and techniques needed for a solution and discussion are presented on setting up these tools and basic concepts such as data encoding, ways to bypass client-side input validation, and advanced techniques (for detecting both unintentional design flaws and attacks using AJAX technology). 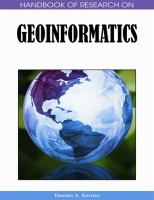 Geoinformatics is the science and technology of gathering, analyzing, interpreting, distributing, and using geospatial information. It encompasses a broad range of disciplines brought together to create a detailed but understandable picture of the physical world and our place in it.

In this brief, well-organized volume, librarian LaPerriere and merchandising professional Christiansen (both with the Denver Public Library) introduce principles and practices for branding and creating appealing displays to attract readers and boost circulation in libraries. In chapters supported by examples illustrated in b&w photos, the authors discuss the use of collection presentation standards as well as ideal locations for displays, the use of fixtures and furniture, props, detailed steps for aesthetic and practical display-building, and upkeep. They also discuss techniques for enlisting and educating staff and for assessing success. The final chapter suggests about 50 themes for library displays and the collections (not specific titles) and props that should accompany each. 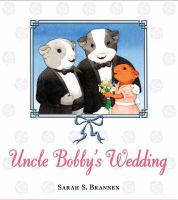 Bobby and Jamie are getting married, but Bobby's niece Chloe is worried that she won't be his favorite person anymore. Will Uncle Bobby still think she is special? Sarah Brannen's warm story is set in an alternative family as Uncle Bobby marries his boyfriend. "Uncle Bobby's Wedding" embraces Bobby?s relationship with Jamie, but keeps its focus where it truly belongs: on an uncle and niece's love for each other. Beautifully told and charmingly illustrated, this simple yet moving story begs to be read time and again. 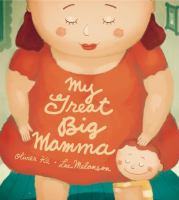 Size matters, according to this groundbreaking picture book - and in a good way. Here, a young boy describes his large mother in caring terms - her softness, her warmth, how comfortable and reassuring it is to sit on her lap on the bus. But when she goes on a diet "because of what people say," he becomes a picky eater himself to show her how foolish she's being. This remarkable book offers a charming and timely picture of a special relationship between a loving mother and the little boy who understands that people should be appreciated for who they are. Luc Melanson's vibrant illustrations add resonance to this sweet story.

Jameela and her family live in a poor, war-torn village in Afghanistan. Even with her cleft lip and lack of educational opportunities, Jameela feels relatively secure, sustained by her Muslim faith and the love of her mother, Mor. But when Mor dies, Jameela's father impulsively decides to start a new life in Kabul. Jameela is appalled as he succumbs to alcohol and drugs, then suddenly remarries, a situation that soon has her a virtual slave to a demanding stepmother. After she's discovered trying to learn to read, Jameela is abandoned in a busy market, eventually landing in an orphanage run by the same army that killed so many members of her family. Throughout it all, the memory of her mother sustains her, giving Jameela the strength to face her father and stepmother when fate brings them together again. Inspired by a true story, and set in a world far removed from that of Western readers, this powerful novel reveals that the desire for identity and self-understanding is universal. 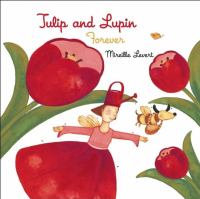 Tulip the watering fairy and her best friend Lupin, a honey-making dog-bee, cultivate their fields and make delicious honey. When Lupin grows old and dies, Tulip is bereft. After a long journey, and the help of a river, the sea, and a friendly tortoise, Tulip is finally ready to start living again. When she returns home, a puppy-bee is waiting for her; eager for his turn in the field. This sensitive, beautifully illustrated story never minimizes the loss of a loved one, but shows that with time, a person can continue not only to live, but can find a new way to enjoy life.

Thomas, Garen. Yes we can: a biography of president Barack Obama. New York: Feiwel and Friends, 2009.

Garen Thomas takes us through the life of Barack Obama, from his struggle to fit in with his classmates, and concern about not knowing his biological father, through his term as an Illinois senator, and the long campaign for president, to his historic victory.

The collection also features the tale of Jack Daw, a lowlife vagabond who comes across a roadside zoo during his cross-country travels. The inmates in this prison are marked for execution, and their rare pelts bound for the black market. Unless, that is, Daw choose to save them.

Go back to the beginning and see how NY police detective Sara Pezzini was first chosen by the mystical Witchblade to be its next bearer. Collecting Witchblade #1-8 by writers David Wohl and Christina Z, and superstar artist Michael Turner, this trade paperback introduced Pezzini, the Witchblade, Kenneth Irons, and Ian Nottingham to the world of comics.

Elegantly produced in an oversize format (9x13"), with 56 woodcut reproductions (a few in color), this catalogue lists some 330 editions from the period 1501-1540, housed in the library of the Leuven Faculty of Theology and acquired since the first catalogue was published in 1994.

Finally collected, here is one of Alan Moore's greatest works and his most critically acclaimed novella of all time, painstakingly adapted to comic books. Moore's frequent collaborator Antony Johnston has carefully preserved the story as it is presented in sequential form with stunning grey-painted art by sensations Lorenzo Lorente and Sebastian Fiumara. What would you pay to learn the innermost secrets of wizards? Young prostitute Som Som has made the ultimate sacrifice; literally sworn to secrecy by cosmetic surgery, the two halves of Som Som's brain have been severed, leaving her able to hear and see... but not speak or act. Now Som Som's unique attributes will put her firmly in the center of an impossible dilemma, as an old friend return to The House Without Clocks, and a deadly game of domination begins.... This collected volume contains the entire four issue series, the full text of the original story, and both artist's original design sketches. Limited to 750 copies.

Six years after Cassie and Lia resolved to become the skinniest girls in their school, Cassie dies. Unable to bear the sadness and guilt following Cassie's death, Lia spirals deeper into her own eating disorder. Elijah, the last person to see Cassie alive, helps Lia find the strength to face her own demons and enter recovery. 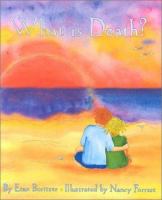 What Is Death? introduces children to the concept of death with examples of customs and beliefs from different religions and cultures. While addressing children's natural curiosity about the subject, the book also challenges them to reflect on the themes of tolerance, identity, and generosity. Using a gentle and comforting tone, and an honest approach, What Is Death? encourages children to embrace the positive in life. This book is the third in author Etan Boritzer's popular series, following the success of What Is God? and What Is Love? 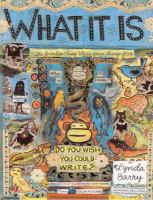 How do objects summon memories? What do real images feel like? For decades, these types of questions have permeated the pages of Lynda Barry's compositions, with words attracting pictures and conjuring places through a pen that first and foremost keeps on moving. What It Is demonstrates a tried-and-true creative method that is playful, powerful, and accessible to anyone with an inquisitive wish to write or remember.