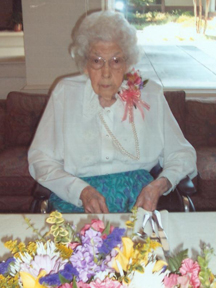 One of North Carolina’s highest regarded citizens and a distinguished figure in the library world, School of Information and Library Science (SILS) alumna Charlesanna Fox, celebrated her 100th birthday with family and friends on Aug. 1st, 2010 at the Twin Lakes Community in Burlington, NC.

“We wish Ms. Fox a happy birthday and congratulate her on all of her memorable accomplishments and the many contributions she’s made over the years,” said Dr. Gary Marchionini, dean of SILS and Cary C. Boshamer Distinguished Professor. “Her years of library service with the U.S. Navy in North Carolina and in Pearl Harbor during and after World War II are truly historical moments in time, and providing nearly 30 years of professional services to the Randolph County Library have made a significant difference to the community. We’re proud that she’s our alumna.”

Fox was born in Asheboro, NC on Aug. 4, 1910. She graduated from Asheboro High School in 1926 and in 1930 she received her undergraduate degree from University of North Carolina at Greensboro (then known as Woman’s College). She taught history at Maxton High School until 1934, and then moved to Washington, DC where she began her career in libraries at the public library.  After leaving DC, she came to the School of Library Science at the University of North Carolina at Chapel Hill (now SILS) where she obtained her Bachelor of Arts in Library Science in 1939. Upon graduation, she worked at the public library in Winston-Salem and then moved to the Lawson McGhee Library in Knoxville, TN. During her time in Tennessee, World War II began. 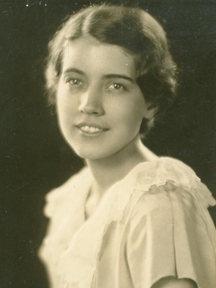 After working three months in the Washington Navy Library Office, Fox was appointed Camp Librarian at Camp Lejeune, North Carolina. She arrived there in late November, 1942. The permanent brick buildings at Hadnot Point were not completed until June 1943. In the meantime, the library office was in Tent Camp over 15 miles away. There was eventually a staff of 16 for the ten libraries.

In November 1945, Fox went to Pearl Harbor to be 14th Naval District Librarian.  By June 1946, orders were given to decommission and reduce the staff from 16 to two. She left Pearl Harbor in June, 1947, and returned to Asheboro in December 1948.  She began a long lasting appointment as the Randolph County librarian in Asheboro, NC, in 1949 where she remained until her retirement in 1977.

Along with providing stellar library service to her patrons, Fox was involved in professional organizations including the North Carolina Library Association where she was president from 1953 to 1955. She was active in both the North Carolina and Southeastern Adult Education Associations serving as president of both organizations.  She was also involved in community organizations such as presiding as the first chair of the Randolph County Council on Aging and the Randolph County Historical Society in Asheboro.

Fox has received many awards throughout her career. In 1973, she was awarded the first annual Grumman “Award for Outstanding North Carolina Adult Educator,” and in 2008, she was awarded the “Order of the Long Leaf Pine,” one of the most prestigious civilian honors which is granted by North Carolina's governor. Those who receive the award have “a proven record of extraordinary service to the state and to their organizations.” Other notable recipients of this award include Maya Anjelou, William Friday, Rev. Billy Graham, Michael Jordan and Charles Kuralt.

A portrait of Fox hangs in the Asheboro Public Library where she devoted her time and talents and inspired many who have visited.