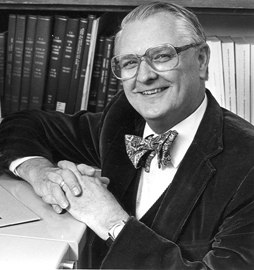 – One of the most outstanding leaders in 20th century American librarianship, Dr. Edward G. Holley, died peacefully Thursday, February 18 in Durham, NC. A highly respected dean and professor at the School of Information and Library Science at the University of North Carolina at Chapel Hill from 1972 to 1985 and William Rand Kenan, Jr. Professor from 1989 until he retired from the School in 1995, Dr. Holley was known as a giant in the library world.

Holley was born in 1927 in Pulaski, Tenn. In 1949 he earned a B.A. in English from David Lipscomb College in Nashville, Tenn. He then received an M.A. in library science in 1951 from George Peabody College for Teachers, also in Nashville. In 1961 Holley completed a Ph.D. in library science at the University of Illinois at Urbana-Champaign. He began his professional academic career at the University of Houston, and he spent nine years in Texas before coming to Chapel Hill in 1972 to assume the position of dean and professor in UNC at Chapel Hill's SILS.

Holley served as president of the American Library Association (ALA) from 1974-75 and received nearly every major award his profession bestowed, notable among them the ALA Scarecrow Press Award for his published dissertation, Charles Evans, American Bibliographer (1964); the ALA Melvil Dewey Award (1983); the ALA Joseph Lippincott Award (1987); Distinguished Alumnus Awards (Peabody Library School, Vanderbilt University, 1987; Graduate School of Library and Information Science, University of Illinois at Champaign-Urbana, 1988); the Academic/Research Librarian of the Year Award (Association of College and Research Libraries, 1988); and the Beta Phi Mu Award (1992). In 1994, he was honored with a festschrift, For the Good of the Order: Essays in Honor of Edward G. Holley, the title bearing witness to his tireless professional devotion.

An eminent historian, Holley produced over 100 books, articles and essays on topics as diverse as library biography, the history of library education, copyright, library administration and the place of personal morality in public life. He served on countless high level committees, worked for accreditation standards, defended the MLS, testified before Congressional committees and acted as library consultant. As ALA president during turbulent times (1974-1975), he was largely responsible for establishing a federated system for ALA (“every tub on its own bottom”).

While dean of SILS, Holley established a doctoral program, hired distinguished faculty and expanded the master's program to two years, providing a core curriculum known famously to students during his years as “The Block.” In 1975 he established the internship program at the Environmental Protection Agency Library that still exists today. As professor and advisor, he was an inspiration to his students.

“Ed was not only a distinguished professional, but also a caring and compassionate individual,” said Dr. Barbara B. Moran, interim dean of SILS. “He was one of the most unselfish people I ever met and was always concerned with the good of others. He was a wonderful mentor and someone who cared deeply about the students, the faculty and the School. Using his own term, he always put the “good of the order” before his individual needs. He was truly a remarkable person and one who will be missed deeply by those who had the opportunity to know him.”

Dr. Holley was preceded in death by his wife, Bobbie Lee Holley. He is survived by four children, Gailon Holley, Jens Holley, Amy Holley and Beth Holley; and  three  grandchildren, Melody Holley, Faith Holley and Julia Ruth. A special memorial to honor Dr. Holley is being planned. Details will be shared as they become available.

Gifts in memory of Dr. Holley may be directed to the “Edward G. Holley Student Research Fund” at SILS. Send donations to:

Portions of this information have been reprinted from “Interview with Edward G. Holley” by Tommy Nixon, which was published in North Carolina Libraries, 56(2), Summer 1998, p.65-70.)