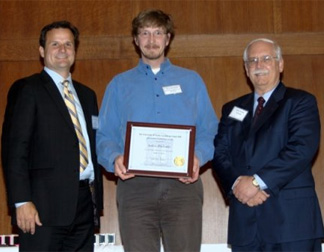 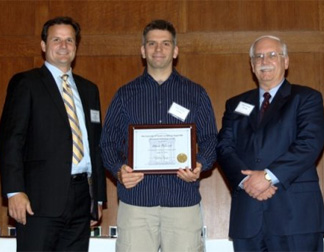 Aaron Brubaker (MSIS '06), assistant director of Instructional Technology at the School of Information and Library Science (SILS) and two other SILS alumni were recognized for their outstanding service to their schools and to the university during the 18th annual IT Awards ceremony hosted by UNC's Information Technology Services on Thursday, April 15, 2010.

Brubaker and Hínár Polczer (MSIS '09), technical support analyst in the Department of Biology at the University of North Carolina at Chapel Hill, each received an individual Information Technology Award during the awards luncheon held at the Carolina Club.

In addition, Douglas Edmunds (MSIS '07), assistant dean for Information Technology at the UNC at Chapel Hill School of Law, received a team award.

Brubaker and Polczer were two of 12 selected for the "Individual IT Award," which acknowledges those who provide outstanding technology service and go over and above the call of duty. The UNC at Chapel Hill IT Awards Committee selected the winners of the individual awards from 63 nominations received from across campus. There were 16 teams nominated for the team awards. Edmunds was a member of the School of Law Team, which was one of two teams selected for the award.

Polczer was also nominated for a team award for the work he has done on BioHelp IT, and Brian Moynihan (BSIS '06 and MSIS '09), program manager at the School of Medicine, was nominated for the team award for his work on the Medical Sakai Team. For a list of all nominees and award winners, please go to the ITS Award site.

The first IT Awards were given out on April 7, 1993, by Bill Graves, then UNC at Chapel Hill's associate provost for information technology and current member of the SILS Board of Visitors.

Two SILS staffers were recipients of the first IT awards. Scott Barker, who was then director of IT for the school and Paul Jones, currently director of ibiblio and clinical associate professor at SILS and the School of Journalism and Mass Communication.