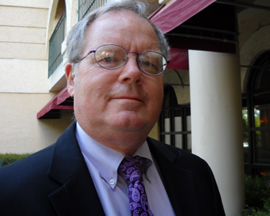 School of Information and Library Science (SILS) alumnus, Robert E. Molyneux, will present "...something commensurate to our capacity for wonder" at the 2010 SILS spring commencement ceremony.

Molyneux is vice president of Business Development at Equinox Software, Inc., a company that develops and supports open source solutions for libraries. He was chief statistician at SirsiDynix from 2004 until 2007, where he worked on the Normative Data Project. Prior to that, he was at the U.S. National Commission on Libraries and Information Science where he served as its director of statistics and surveys. Previously Molyneux held various positions at the Federal Deposit Insurance Corporation, including statistician in the Division of Research and Statistics and senior information analyst in the Division of Information Resource Management while heading the team that implemented the Internet at the FDIC. He has held faculty positions teaching in the library schools at the University of South Carolina, Louisiana State University, and the University of Illinois. He also did intense, short duration training— primarily in the fundamentals of digital networks—for Global Knowledge, a technology training firm. Prior to his doctoral work, he worked in academic and public libraries.

His academic research has largely concentrated on compiling, documenting and analyzing data from libraries with occasional forays into other areas, particularly information technology. This work has appeared in articles, monographs and Web sites.

The commencement ceremony will be held on Sunday, May 9, 2010 at 1 p.m. in the Great Hall of the Frank Porter Graham Student Union.