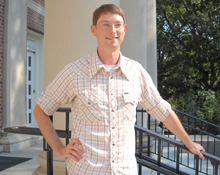 Disestablishmentarianism is the title of SILS graduate student Mike Nutt’s visual memoir project, which was selected by a jury for this year’s CHAT Festival Student Media Gallery. CHAT (Collaborations: Humanities, Arts & Technology) is a festival celebrating innovation in the digital arts and humanities through collaboration.  This year’s festival will be held on the UNC campus February 16th-20th.

Disestablishmentarianism is a short, experimental memoir. In it, Nutt performs readings of two texts by cultural theorist Larry Grossberg. Behind this performance is a collage comprised of various documentary elements—including artifacts from Nutt's own life and video appropriated from the works of surrealist underwater filmmaker Jean Painlevé and a piece by videographer Helen Kearns (which itself was a manipulation of several ethnographic films). The soundtrack is comprised mostly of noise music recorded live at performances by the groups Boyzone and Macronympha, but also includes part of a composition that was created from a single half-second long audio sample.

Nutt’s work will be on display from February 17-19 in the Johnston Center. For more information on this year’s CHAT festival, visit the CHAT Web site: http://www.chatfestival2010.com/index.html