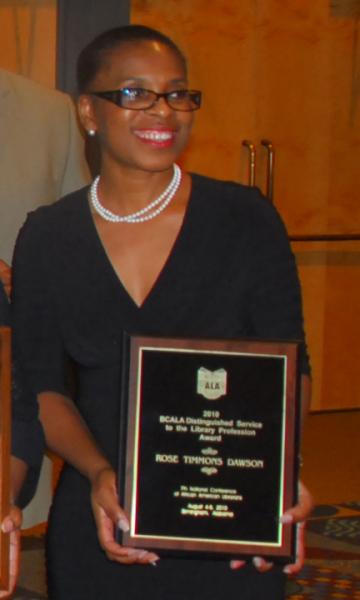 Rose T. Dawson, SILS alumna (MSLS '86) and director of the Alexandria Library in Virginia, received the prestigious Distinguished Service to the Library Profession Award at the National Conference of African American Librarians of the Black Caucus of the American Library Association held in Birmingham, AL, Aug. 4 to 8.  The award recognizes an individual member of the library profession who has, over a significant period of time, made an outstanding national contribution to librarianship and library development.

Dawson, the director of the Alexandria Library since 2008, earned both her Bachelor of Arts in Education and Master of Library Science from the University of North Carolina at Chapel Hill. Additionally, she completed the program at George Washington University's Center for Excellence in Municipal Management to become a certified public manager. She is an active member of the American Library Association, Public Library Association, Library Administration and Management Association and Association of Library Services to Children.

During her time as director of the Alexandria Library, Dawson has managed the upgrade of a new catalog and checkout system and hosted the 70th Anniversary of the 1939 Civil Rights Sit-in, celebrating the five young African-American men who challenged the status quo by entering the then all-white Alexandria Library and asking to register for a library card. Dawson continues to make tough decisions during these challenging economic times while also skillfully ushering in a new age of extreme technological advancements in the organization and the accessing of information and entertainment.

Dawson formerly worked as the coordinator for Community Youth Services of the District of Columbia Public Library.  She started as a children’s librarian at the Palisades and Cleveland Park Neighborhood Libraries; headed the Children’s Division of the Martin Luther King, Jr. Memorial Library; managed several grant projects including a half million dollar grant from the Carnegie Corporation of New York; served as change agent for Internal Affairs; and carried out several special assignments before assuming her last position at DCPL in 2002.

She continues to strike a balance between the traditional and the nontraditional Library user who primarily want to use Alexandria Library through the Web site.