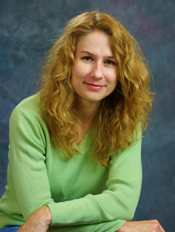 Laura Christopherson has been named an ASIS&T New Leaders Award Winner, joining seven other talented recipients from the U.S. and abroad who also received the honor.

Funding from the award will allow Christopherson to attend the next two annual ASIS&T meetings, where she will be partnered with mentor, Cassidy Sugimoto (SILS Ph.D. 2010), to help her make the most of each meeting experience.  As a consequence of receiving the New Leaders Award, Christopherson will also have the opportunity to make a significant contribution to ASIS&T through her involvement in one of its many Special Interest Groups (SIGs). After attending the next two ASIS&T meetings, Christopherson will report back to the award's selection committee, detailing what she has experienced and learned.

"I'm very excited about and grateful for this opportunity," said Christopherson.

At this year's ASIS&T annual meeting, Christoperson was also accepted to present a poster entitled, "What are People Really Saying in the World of Warcraft Chat?"

A SILS Ph.D. student in her fourth year of study, Christopherson earned her MSIS from SILS in 2005 and her BA in drama from UNC at Chapel Hill in 1991. Her research interests include natural language processing and knowledge representation. She teaches courses on systems analysis and she has worked professionally in the areas of systems analysis, project management, information architecture, user interface design and information design. She was named a HASTAC (Humanities, Arts, Science, and Technology Advanced Collaboratory) Scholar in 2009 and has been an active member in the Carolinas Chapter of ASIS&T for two years.