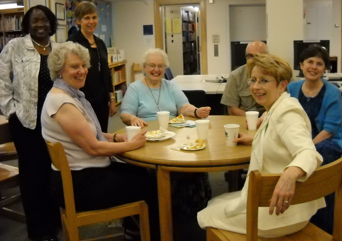 Two years after her official retirement, Dr. Evelyn Daniel, associate dean for Academic Affairs and professor, will leave the School of Information and Library Science (SILS) at the University of North Carolina at Chapel Hill to enjoy a much deserved retirement.

Daniel extended her time with the School as associate dean for Academic Affairs replacing Dr. Paul Solomon who retired in June 2008. Daniel, who was set to retire as well, took on new responsibilities - addressing curriculum issues, assigning student advisors, scheduling classes, working with the faculty on school committees and faculty meetings, selecting and managing adjunct faculty and teaching assistants, overseeing the coordination of the Ph.D. program, making financial aid decisions, organizing material for reviews by external agencies and a myriad of other tasks associated with academic affairs.

"Evelyn has been the heart of the School for the past 25 years," said Dr. Gary Marchionini, dean and Cary C. Boshamer Distinguished Professor. "She is a remarkable scholar, passionate about educating our students, always engaging with faculty on numerous scholarly topics and devoting many hours to the School, going over and above any expectation. She stepped in and took on a new appointment that was critical to the educational process of the school. She will be sorely missed, although we've recruited her to continue as adjunct professor."

Daniel has been with SILS since 1985 when she was appointed dean of the school. Her five-year term as dean was marked by a number of significant accomplishments for the School. Chief among these was the increased breadth of the School’s curriculum and research, symbolized by a change in name from the School of Library Science to the School of Information and Library Science and by the addition of two new degrees. A master’s track in information science was initiated in 1988. The post-master’s Certificate of Advanced Study was added that same year and six new faculty were appointed. Enrollment increased from 120 matriculated students in 1985 to over 170 in 1990. Sources and amounts of funded research also increased. The school’s facilities were renovated to accommodate its growth and increasing reliance on technology. In addition, she reorganized the administrative offices, added two new professional positions and upgraded four staff positions. She worked with the faculty to develop a Bylaws, Policy and Procedures Manual, codifying and clarifying the School’s internal governance and standard operating procedures and initiated a faculty-led strategic planning process. 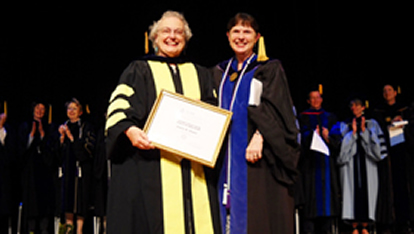 For her exceptional ability as an educator, Daniel received the "SILS Award for Teaching Excellence" in 1999 and again in 2009. She was the recipient of the ALISE Service Award in 2000 and most recently, she was given the "Edward G. Holley for the Good of the Order" award during the 2010 spring commencement ceremony.

A luncheon was held on May 5, 2010 to honor Dr. Daniel. Faculty, staff and students were in attendance to wish her well.

Dr. Daniel will continue to interact with the School as an adjunct professor. She plans to co-teach, INLS 089-001: FYS: Bought, Burned, or Borrowed: Information Ethics and Policy in the World Around US3; this fall with Dean Gary Marchionini.

(EDITOR'S NOTE: A portion of this article was reprinted from the Fall 1989 edition of News from Chapel Hill, the school's newsletter.)