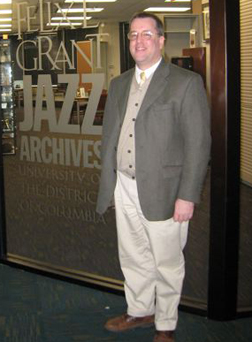 SILS alumnus, Michael Fitzgerald (MSLS ’08), is co-director of the "Map of Jazz Musicians" project, which was recently funded by a National Endowment for the Humanities Digital Start-Up Grant.

The grant, which can be up to $50,000, is given to a digital initiative in any area in the humanities, including projects that involve planning and developing prototypes of new digital tools for preserving, analyzing and making accessible digital resources, including libraries’ and museums’ digital assets.

The "Map Of Jazz Musicians" project will build on Fitzgerald’s work with jazz discography data to produce an online interactive visualization showing the complex network of professional interactions that jazz musicians create over the courses of their careers.

“This innovative project is a natural fit with jazz because unlike many other styles of music, jazz places an emphasis on the individual performer," said Fitzgerald. "The vast majority of professional relationships are not stable and consistent, but instead are fleeting, with each musician playing and recording with hundreds or thousands of others over the course of a career.”

Sharing information has long been one of Fitzgerald’s passions, evidenced by his earlier career as a music educator as well as by his involvement in founding "Current Research In Jazz," the first open access journal in the field of jazz studies.

“As a science, discography has important differences from cataloging," said Fitzgerald. "I hope this project will help to establish a standard data format for jazz recording sessions that can be used by jazz archives around the world, permitting collaboration and cooperation. That the data can be repurposed in a new way via XML for such endeavors as this map project, is a wonderful side effect.”

Seeing the common ground shared by jazz discography and the Functional Requirements for Bibliographic Records (FRBR), the re-thinking of how libraries approach cataloging is what convinced him that he needed to become thoroughly familiar with the field of library science.

“Although developed independently of FRBR, the discographical database system that I have been working with is based on the same principles," said Fitzgerald. "The concept of authority control is essential to the project."

Fitzgerald is the electronic services librarian at the University of the District of Columbia (UDC), home to the Felix E. Grant Jazz Archives, one of the five case studies in his SILS master's paper on jazz archives in the United States. In addition to managing all Web resources and services for the university, he is also involved with the archives, and he has been instrumental in bringing two significant collections to UDC. He has also started a jazz research lecture series now in its second year. He is excited about opportunities that allow him to apply his knowledge and experience as a jazz researcher to the field of library and information science. Even before attending SILS, he was active in discography, the study of the information and relationships that describe jazz performances and recordings.

An active member of the Music Library Association, Fitzgerald is not only co-coordinator of the Jazz & Popular Music Roundtable at MLA, he is also the director of the MLA Big Band, which performs annually at the association’s national conferences. He says, “This group shows that librarians are not only subject specialists, but are also practitioners. It provides the perfect way to showcase archival materials, bringing the music to life in front of hundreds of fellow librarians.”