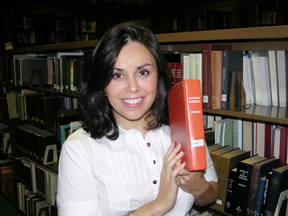 On September 7, 2010, Marian G. Fragola began her new position as North Carolina State University (NCSU) Libraries director of Program Planning and Outreach.  Fragola's responsibilities include the implementation of programming that strengthens connections and networks between NCSU's many research libraries and the university community.  Additionally, Fragola will manage the Fabulous Faculty Series, the Student All-Star Series, the Amazing Alumni Series, develop new programs, and serve as director of the North Carolina Literary Festival the next time it is hosted by NC State.

Fragola is no stranger to work in either academic or public libraries.  As an undergraduate student at Washington University, she was a library work-study student.  During her time at SILS, she worked at the Durham County Library (DCL) and was subsequently hired full-time by the DCL upon graduation.  In addition to these positions, Fragola also served as associate campaign director at the Atlanta firm of Coxe Curry & Associates, providing campaign counsel and management services for nonprofit fund-raising campaigns.  In prior positions, she was the development associate for the Carolina Theatre of Durham and a broadcast coordinator/copywriter for Belk in the Triad.

When asked about what she's most looking forward to achieving in her new position, Fragola stated she was particularly excited about "building on the excellent reputation of the NCSU Libraries and deepening relationships between the libraries and different constituencies--students, faculty, staff, alumni and the Raleigh community."

Emphasizing her SILS roots, Fragola also commented on how her SILS experience helped her enter the professional world of academic librarianship.

"The faculty at SILS have been incredibly helpful, both during my time at SILS and after I graduated," says Fragola.  "I have often asked for advice or guidance from faculty members, and they have always made time to answer my questions and give me thoughtful feedback.  They have also urged me to stretch myself beyond my comfort zone.  Bob Losee, for example, suggested that I seek out publication opportunities for my thesis.  I don't think I would have done that without his encouragement."

Parts of this news story were adapted from an NCSU Libraries press release.