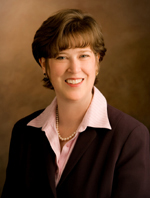 Joyce L. Ogburn, School of Information and Library Science (SILS) alumna, university librarian and director of the University of Utah Marriott Library, has been elected vice-president/president-elect of the Association of College and Research Libraries (ACRL).  She will become president-elect following the 2010 ALA Annual Conference in Washington D.C. and assume the presidency in July 2011 for a one-year term.

"Being chosen to lead ACRL as vice-president/president-elect is the highlight of my career,” Ogburn said. “I am enormously grateful for the confidence of the members in my leadership skills and will do my utmost to advance ACRL’s initiatives and programs."

“ACRL is delighted to have Joyce join the Board as vice-president/president-elect,” ACRL Executive Director Mary Ellen Davis said. “Her experience serving on not-for-profit Boards, her leadership in ACRL’s scholarly communication initiatives, and her service throughout ACRL will be an asset to the Board as it continues to work with members to meet their needs and to advance ACRL’s strategic plan.”

Ogburn's work with state and regional associations includes serving on the Greater Western Library Alliance Board of Directors (2009-present), and serving on the Association of Research Libraries Scholarly Communications Steering Committee (2008-present).  She is a member of the Center for Research Libraries Board of Directors (2007-present), and she served on the SPARC Steering Committee (2005-07).  She was also  a member of the American Anthropological Association Librarians Advisory Group (2001-05).

Her publications include author of, "Moderately Risky Business: Challenging Librarians to Assume More Risk in an Era of Opportunity," Risk and Entrepreneurship in Libraries: Seizing Opportunities for Change (ALA/ALCTS), 2009; author, "Defining and Achieving Success in the Movement to Change Scholarly Communication," Library Resources and Technical Services, 2008; and co-author, Establishing a Research Agenda for Scholarly Communications: A Call for Community Engagement (ACRL), 2007.

This news item has been adapted from ACRL's press release.