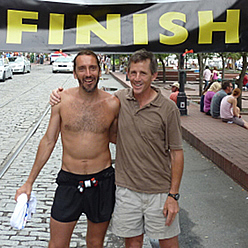 His most recent goal is to run across Florida this coming November, but Scott Adams, SILS director of Information Technology, plans to go the distance, running across the other 49 states as well.

He has already crossed two of them off his list.

Adams' most recent run across Georgia, which covered over 260 miles, began in Ft. Benning on May 27, 2010 and ended in Savannah on May 30. Two years ago, he ran more than double the distance, crossing 700 miles of terrain from Murphy, North Carolina to Manteo, North Carolina.

Adams' goal is to raise funds for cancer research and awareness. In the past, donations in support of his runs have been given to the American Cancer Society and Homes for Heroes, a charity dedicated to helping our Veterans.

His support team for his latest run across Georgia was made up of Dr. Evelyn Daniel, SILS associate dean for academic affairs and professor, and Jeremiah Joyner, manager, ITS Labs and Systems at UNC at Chapel Hill.

To keep up with Adams' daily progress, or to learn more about his tremendous effort to run across the U.S., visit the following Web site: http://runthestates.us/