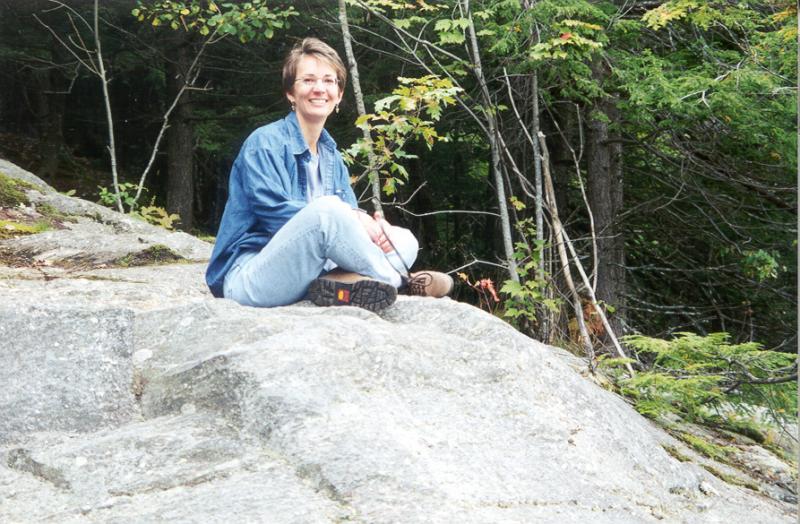 As a teacher and head librarian in the hills of Virginia, Dr. Sandra Hughes-Hassell (Ph.D. '98), professor and director of SILS School Library Media Program, was excited to learn she would be moving to the big city of Philadelphia, PA in 1994 to direct the Philadelphia Library Power project. After all, the Library Power project focused on providing resources and support for all learners in schools, both children and adults, thus allowing them to be better users of ideas and information. It was also one of the projects administered by the Philadelphia Education Fund, an organization “dedicated to improving the quality of public education for underserved youth throughout the Philadelphia region.”

Enthusiastic and driven, Hughes-Hassell diligently worked to meet the goals set for her by visiting with teachers, students, librarians and administrators throughout the public schools of Philadelphia. It was through these interactions and observations, as well as relationships she established, that she recognized that the general public often received stereotypical views of urban youth and teens from the media, and that public schools and libraries are critical for “breaking the cycle of poverty and redressing social inequities.”

“The children and teenagers I encountered in the schools were bright, focused and eager learners,” said Hughes-Hassell. “This was in sharp contrast to the images I saw on the evening news. The teachers (I consider school librarians to be teachers) were passionate, innovative and committed to reforming the educational system to make it ‘work’ for all children—not just for those lucky enough to live in the more affluent neighborhoods in the city.”

While teaching in Virginia very early in her professional career, she had witnessed first-hand the need for improved literacy especially for underserved students.

“When I taught second grade in rural Virginia, I had two African American boys in my classroom whose literacy needs I was unable to meet,” said Hughes-Hassell. “I was unprepared as a new teacher to provide the kind of resources or learning strategies that would have enabled them to become proficient, thoughtful readers. I have never forgotten those two boys.  I can't go back and change their educational experience, but I can certainly through my research and partnerships with schools and libraries help to ensure that other African American male students have a positive educational experience.”

With this determination and her experiences in the inner city of Philadelphia, she has focused her research on the information seeking behavior and needs of minority youth, particularly  urban teenagers, and to tell their stories.

During the past year, Dr. Hughes-Hassell and several of her students and SILS alumni have diligently worked to help urban communities in Durham, North Carolina.

The group used a literacy initiative centered on the work of Dr. Alfred W. Tatum at the University of Illinois at Chicago. In his 2009 book Reading for their Life, he argues that the shortcomings of traditional reading strategies with Black males can be traced back to the fact that educators are failing to engage these students with meaningful texts that could make a positive difference in their lives. With her own experiences and the knowledge Tatum provided, Hughes-Hassell and her team set out with two goals: 1) to share a model that school librarians can utilize to support the literacy development of Black males and 2) to remind administrators and classroom teachers to look to school librarians as critical partners in their efforts.

The first session focused on developing an understanding of the literacy needs of African-American males. According to recent National Assessment of Educational Progress data, only 14 per cent of African-American students performed at or above the proficient level at or above proficiency in reading on national tests in 2009. Males performed, on average, nine points lower than females on these tests. The librarians discovered that African-American males need meaningful literacy instruction that nurtures their resiliency and encourages them to value the written word.  This means, among other strategies, using texts that Black males can relate to, books that offer shared experiences and serve as a road map to “sidestep the turmoil” they may be experiencing.

The task for the next set of workshops was to identify powerful texts that the young Black men would find engaging and would want to read. Identifying these types of texts is difficult, especially given the small number of books published each year that are about African Americans males. As the librarians worked to select texts to recommend to teachers, parents and students as Hughes-Hassell and her team encouraged them to ask the following questions:

2. Does the book connect to issues or questions that are important in the lives of Black males?

3. Are there characters in the book that Black males would want to emulate?

4. Would the book make Black males think or act differently? 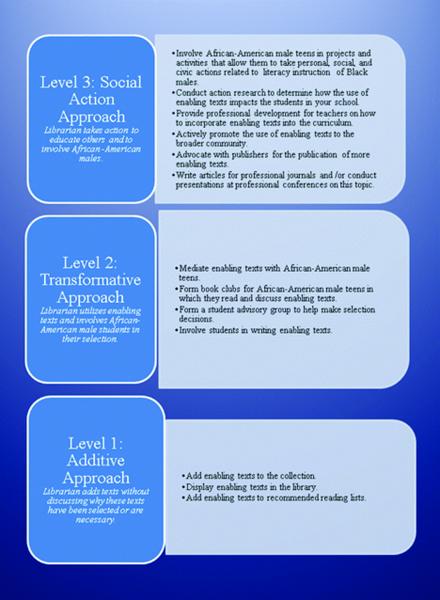 In the final set of workshops, the librarians learned how to mediate, or discuss, powerful texts with students. Without the chance to discuss their reading with others and to respond to the texts through writing, engaging texts cannot fulfill their true potential as instructional tools nor make a difference in the lives of young Black men. In addition to the mediation efforts undertaken by the librarians, funding from an American Library Association Diversity Research Grant was received by Hughes-Hassell and Rawson to conduct a book discussion with six young Black male teenagers in the district. As these quotes from three of the young men show, the right books can stimulate teens to engage in reflection.

“I would recommend [Bronx Masquerade] because things like this really do happen in life, and you have to find a way to get your feelings out, or if you keep it all bottled up, you probably just don’t feel good about yourself.”

“You could really put any race or any kinda people in this situation, and I don’t think you would look at the book any different.... If any two brothers come together during adversity, then I don’t think it matters what kinda race it is.”