Imagine the need and desire to index some important research data that have just been made available on the Web in digital form. The aim is to do high quality indexing, using standardized vocabularies (e.g., thesauri, taxonomies and ontologies). Let's say the research data are about the endangered Andean and Chilean flamencos living in the Altiplano, the magnificent Salar de Uyuni (salt flats) of Bolivia; the data tracks the migration patterns of this species and the impact of environmental conditions from nearby experimental mining of uranium during the last quarter of the 20th century. The data are interdisciplinary, covering biology and environmental science, during a certain time period, in a certain geographical region.

High quality indexing requires one to draw the very best standard indexing vocabularies covering biology, environmental science, time periods and geographic regions. The challenge is that although specialized, rich vocabularies covering these individual sub-topics are accessible via the World Wide Web (Web), it is very timely to search each vocabulary independently and consider an appropriate indexing term. There is currently no mechanism for simultaneously searching multiple vocabularies in a unified way.  The human resource time is too costly, so the researcher is likely to settle for a more general vocabulary and do the best he or she can, and then move on to the next task. This problem is rampant in attempts to index interdisciplinary resources in the growing collection of digital libraries, archives and repositories that house interdisciplinary resources.

These challenges are being addressed via the Helping Interdisciplinary Vocabulary Engineering (HIVE) project, led by a research team at the University of North Carolina at Chapel Hill’s School of Information and Library Science (SILS) Metadata Research Center (MRC), in collaboration with the National Evolutionary Synthesis Center (NESCent)  in Durham, N.C.

Funded by the Institute of Museum and Library Services, HIVE presents both a model and a system. HIVE supports automatic metadata generation (cataloging) by drawing descriptors from multiple controlled vocabularies during a single cataloging sequence, in an efficient and affordable manner (Greenberg, et. al., 2011). 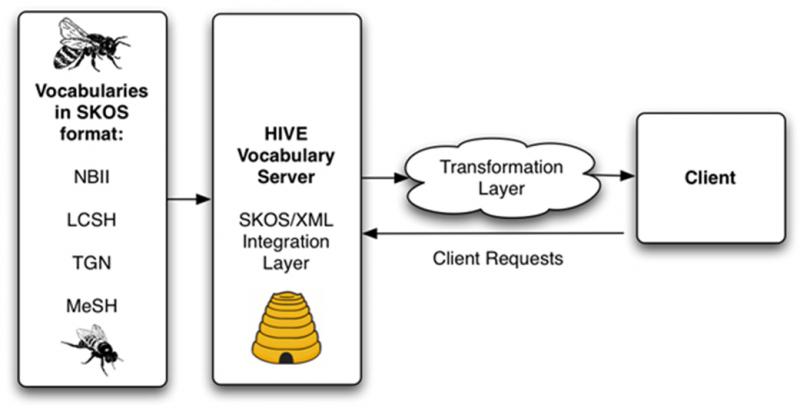 “The HIVE logo explains the model,” said Greenberg, project Principal Investigator and director of the Metadata Research Center. “Think of a bee searching multiple flowers for pollen, and bringing it back to the HIVE. It is like a selective search for the best indexing vocabulary, drawing from multiple sources.” Greenberg says that the research team likes to think of HIVE as an adverb—meaning that to hive (or hiving) is the process of searching and pulling the best indexing terms for resource description from multiple vocabularies.

The HIVE project uses SKOS ww.w3.org/2004/02/skos/, a standard developed for encoding thesauri and other standard vocabularies in the eXtensible Markup Language—XML. The simple, universal application of SKOS permits vocabulary systems to become easily machine manipulable and interoperable during a metadata generation sequence.  Multiple vocabularies representing different domains (art, biology, history) or facets (topic, time period, location) can be searched at once during indexing if they are encoded in SKOS. HIVE vocabulary partners, theLibrary of Congress  and the United States Geological Survey, and The Getty Research Institute  have embraced SKOS and XML allowing for automatic synchronization. HIVE has an international reach and includes a connection with the Biblioteca Nacional de España (the national library of Spain).  Advisory board members Eva Méndez Rodríguez and Gema Bueno de la Fuente, both at the University Carlos III of Madrid (UC3M), Spain; MRC research associate José Ramón Pérez Agüera, Spain; and advisory board member Alistair Miles of the United Kingdom bolster the international aspect of this project.

“HIVE has gained a bit of traction over the last year,” said Ryan Scherle, data repository architect at NESCent and HIVE coPI. “The code is accessible via Google-code, a venue for sharing Open Source code; and we are aware of HIVE implementations and exploration via the Long Term Ecological Research Network, the Library of Congress Minerva project and Yale University.”

In addition, the Google Summer of Code (GSoC) program, which provides students an opportunity to contribute to Open Source developments, includes HIVE through a connection with the DSpace Community.  This year’s DSpace Community GSoC activities include a project proposed by Ph.D. student Yigang Zhou (of the School of Information Management, Wuhan University, P.R. China) to provide a SKOS based Authority Control for DSpace.  The project is being mentored by Scherle and DSpace Committer Mark Diggory (of @mire Inc.). Yigang’s solution will be capable of providing semantic search, term completion and graph traversal on SKOS based taxonomic data sources.

“There is great promise that the work will provide an integration of HIVE and DSpace (popular repository software) in a future Dryad release,” said Mark Diggory, DSpace Committer at atmire.com in Carlsbad, CA and Belgium. “The larger outcome is that the HIVE applications will be available to any DSpace instance that seeks to integrate this SKOS-based authority control module to aid metadata generation.” 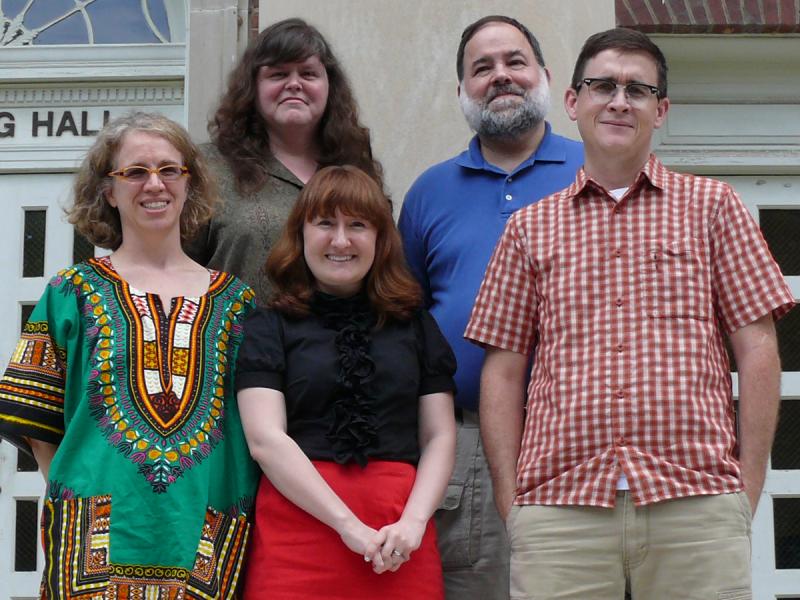 “One of the most exciting aspects for the HIVE project has been student involvement,” said Greenberg. Greenberg and HIVE co-investigator, Robert Losee, SILS professor, have engaged and mentored several students to explore information retrieval, interface design and metadata quality issues with HIVE. Losee notes that the output has resulted in several SILS master’s papers, conference presentations and a student showcase.

“The HIVE workshops have been our way of reaching out to the professional library community and beyond,” said White. “Attendees leave the workshop with more knowledge about current standards and feel empowered to incorporate SKOS and HIVE into their everyday work.” “They have all made significant contributions to the project” said Greenberg, noting that “exploring new horizons collaboratively has been rewarding for us all.”

Photo on the right: Jane Greenberg, Hollie White, and Craig Willis, back row, Lee Richardson (HSL) and Bob Losee. Missing from the photo is Ryan Scherle, the coPI of HIVE, as well as José Ramón Pérez Agüera and Lina Huang.