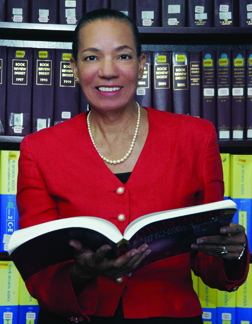 Irene Owens isn’t your typical librarian. In fact, she says there is really no such thing. She and her colleagues and peers across the state and nation are bona fide information scientists, a discipline that is gaining popularity among undergraduate students at UNC and other area institutions as well.

As an alumna of the UNC School of Information and Library Science’s doctoral program, class of 1995, and current dean of North Carolina Central University’s School of Library and Information Science, Owens is excited about the prospects and is intent upon fostering the idea that library science is “cool,” particularly among minority students and especially young men.

“Gone are the days when a ‘librarian’ was a custodian of endless card catalogues and dusty book stacks,” she said. “In today’s ever-changing digital information landscape, advanced information science professionals will be critical in harnessing, storing and accessing the vast amounts of data that are being created on a daily basis.”

More importantly, she said, library science is an evolving discipline that is attracting a vibrant and diverse cohort of students in addition to the traditional graduate-level scholar most often associated with librarianship. Owens is working to continue that trend. “I was fortunate throughout my academic career to have tremendous role models who were truly committed to helping me succeed,” she said. “The ability to point to a young African-American, American Indian or Asian peer as a prime example of what is attainable carries much more weight among students than anything I could say. I am a strong advocate for cross-cultural and cross-gender mentoring because that is one of the things that defines a premier program.”

“Gone are the days when a ‘librarian’ was a custodian of endless card catalogues and dusty book stacks.”

As UNC’s SILS celebrates its 80th anniversary this year, it is also celebrating its ranking by “U.S. News & World Report” as the leading information science program in the country. The school’s reputation for outstanding professional development in a collegial atmosphere is the main reason Owens decided to come here. “I got my Ph.D. partly because I was encouraged to do so and because I needed a new challenge,” Owens said. “I came to UNC to get my Ph.D. because it was the perfect fit. I loved the environment of the campus as a whole and rarely missed the opportunity to dance in the Pit at the annual American Indian Powwow.”

Owens said her passion for information science was ignited when she worked at the Library of Congress in Washington D.C. early in her career. “Once I recovered from the sheer awe of the place, I was drawn in completely by the collaborative environment,” she said. “I want to emulate that and incite that same kind of passion in our students so that they, in turn, will have their path chosen for them as mine was for me.”

Owens' career has taken her across the country and around the world. Prior to her appointment at NCCU, she spent two decades at the University of Texas at Austin, including 10 in the Graduate School of Information, and was the first African-American to receive tenure there. She is a former head librarian at Howard University School of Divinity.

Reprinted with permission from Celebrating Carolina's Diversity, The newsletter of the Alumni Committee on Racial and Ethnic Diversity.