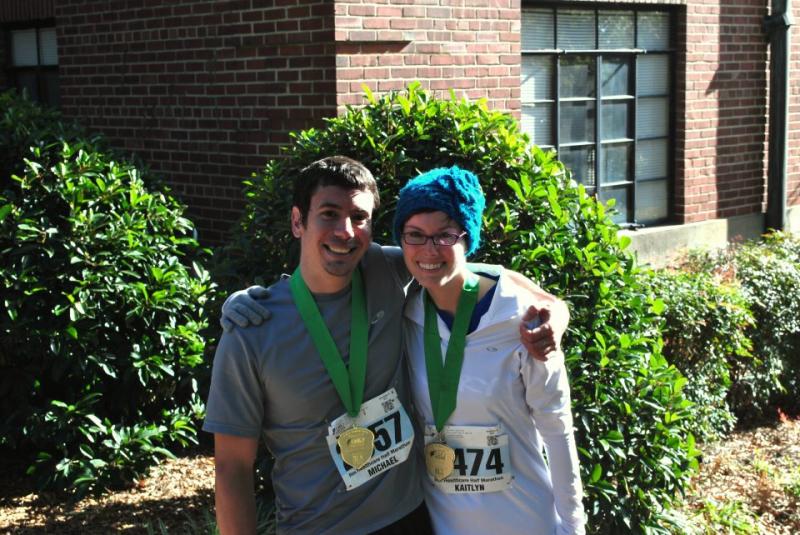 Kaitlyn Murphy, undergraduate manager of the Bachelor of Science in Information Science program at UNC’s School of Information and Library Science (SILS), recently achieved a feat that few can say they’ve been close to accomplishing in their lifetimes. On November 6, Murphy completed her first half marathon in the Raleigh City of Oaks Marathon and the Rex Healthcare Half Marathon Run which benefits the Leukemia and Lymphoma Society, Girls on the Run and the Rex Healthcare Foundation.

“I began running this past spring, and I wanted to run a 5k,” Murphy said. “So, I ran the 5k over the summer. After that, I wanted to do something bigger, and that was the half marathon.”

Murphy began running regularly with a training group in Raleigh. The group would go on long runs, routinely increasing the mileage from five miles up to 13—approximately the length of a half marathon.

A half marathon measures most nearly 13.1 miles. Although Murphy had run this distance in preparation with her training group, she admits there was still an element of nerves and intimidation when the race began.

“I was just concerned for the actual race,” said Murphy. “I had run 13.1 [miles] in practice before, but I thought there was just a chance that I wasn’t going to do it this time.”

Despite any anxiety Murphy may have felt going into the race, she managed to finish all 13.1 miles without slowing her pace to a walk. The race took her roughly two hours and fifteen minutes to complete. Murphy hopes to be able to run another half marathon and maybe eventually a full marathon in the future.

For those considering distance running of their own, Murphy offers a few pieces of advice.

“Even if you think you can’t do it, you can,” Murphy said. “I thought the same thing for myself. I think getting over just thinking about how far it was—it made it seem so much harder than it turned out to be, so it’s good to just get over that and just do it.”

Photo: Kaitlyn Murphy with friend Mike after they completed the half-marathon run.