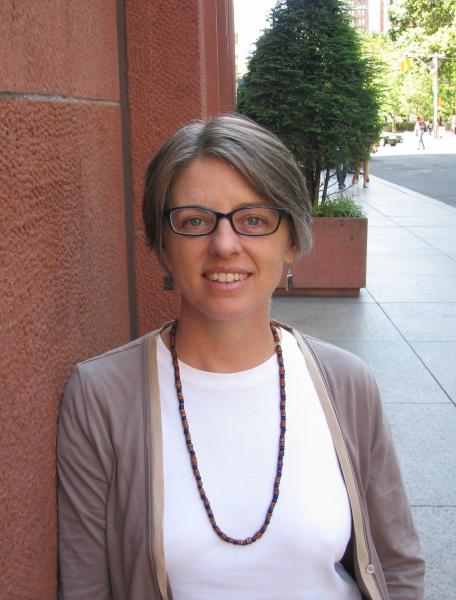 The SILS Alumni Association Board has selected Monica McCormick (MSLS '06) as its featured alumna. McCormick has an unusual job at New York University (NYU), where she is employed as a program officer for the university's Digital Scholarly Publishing office. While many smart and talented people do digital publishing in either a university press or a library, often collaborating with counterparts on the other side of campus, what's unique about McCormick's position is that she works in both the Press and the Library. In her position, she divides her time between the NYU Press and the Library, and serves as a bridge between both organizations.

At the University Press, McCormick does strategic thinking and planning, as the organization moves from being a print book publisher toward offering scholarship in a range of digital forms -- with an emphasis on the digital needs of libraries and the new ways scholars are working in digital realms. At the Library, she supports digital publishing services for NYU scholars, including those associated with the institutional repository and a nascent journal publishing program. In collaboration with the NYU Digital Library Technology Services group, she works on some experimental publishing with groups of scholars such as MediaCommons. Finally, McCormick brings skills from both the University Press and the Library to bear on the evolving scholarly publishing needs of NYU.

"I spend a lot of time managing projects, communicating needs and desires, articulating goals and grappling with change," said McCormick.

In addition to these daily work duties, McCormick serves on the advisory group for SPARC's  Campus-based Publishing Resource Center. She says the Resource Center provides a very useful set of practical resources for those who want to do scholarly publishing from a campus setting, with or without partnering with a university press.

"The folks listed on the Editorial Board are a fine group of people working on library/press collaboration in a variety of interesting ways," said McCormick. "Working with them has been truly educational for me, since there is no obviously 'right' way to do this work. Many of the people involved with the SPARC group have also been engaged in an IMLS-funded series of workshops on library publishing, where attendees came from institutions of every size, all over the U.S. and Canada. I'm encouraged by the growth of interest in library publishing, and I'm grateful that organizations like SPARC and IMLS are putting resources into much-needed training and sharing of ideas."

McCormick credits the School of Information and Library Science (SILS) with helping her build her future by crafting a set of courses that prepared her for an open-ended future.

"I came to SILS in the midst of a career change, having been a university press acquiring editor for about 15 years," said McCormick. "I knew I wanted to bring publishing skills into a research library, but there were very few examples of how to do that. So when asked what kind of librarian I wanted to be, I'd answer, I don't think my job exists yet. I wasn't being flippant; I didn't see many libraries saying clearly in 2004 and 2005 that publishing was a key service, though there was a lot of energy invested in creating unique digital collections, building institutional repositories and supporting scholarly communication in a range of ways that looked to me like new forms of publishing. Fortunately, the faculty at SILS took me seriously. I was able to focus on digital libraries, metadata and a bit of database building, and also got a deep grounding in traditional library values and skills. It was a great way to spend two years, acculturating myself to the world of libraries."

In the past year McCormick says that she realizes that the key to success in her work is communication. Working among all kinds of experts, she defines her role as helping them share their knowledge with each other, so they can collaboratively build services together. These experts include her colleagues at NYU, but extend well beyond, in overlapping communities that are building the future of scholarship.

"I'm trying to spend more conscious time with social media - not only connecting with my SILS buddies, which is great - but also sharing ideas among a set of friends and colleagues who can help me think and push me in new directions," said McCormick. "I want to get bolder about putting my plans and goals out there, and incorporating the responses. I'm convinced that the future of scholarly communication will include more active give-and-take than the familiar cycle of scholars creating work that is peer reviewed, selected, published and collected to enable the next round of the same."

She predicts that these processes will all occur (and that publishing will be both in print and digital), but with a lot more interaction and overlap among the stages. For her, the critical skills will be understanding and supporting the flow of ideas. She believes that social media will help to build those skills.

McCormick says that her favorite thing about changing careers has been that librarians are professionally required (and personally compelled) to provide information, so they make the best possible colleagues for a newcomer. For McCormick, that change has been an interesting and varied career that has introduced her to a world of opportunity.