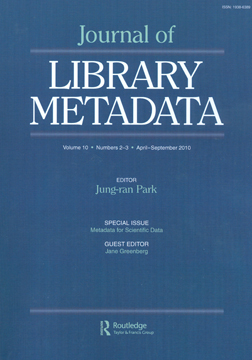 The most recent edition of the Journal of Library Medadata (JLM) is a special issue featuring "Metadata for Scientific Data" and includes guest editor: SILS professor and metadata expert Dr. Jane Greenberg. In her introduction to the volume, "Metadata for Scientific Data: Historical Considerations, Current Practice, and Prospects," Greenberg emphasizes metadata's rich history as a discipline, using The Great Library of Alexandria as a starting point. Moving forward from ancient Greece, Greenberg progresses through history to the present, introducing the work of the other metadata specialists in the issue along the way.

“For me, writing the introduction and working with the various authors was a joy," said Greenberg, SILS professor and director of the Metadata Research Center. "The process of pulling this issue together made me think deeply about the nature of scientific data, and examine the role of libraries in hosting data during ancient times.”

"With clear and discriminating vision, Jane Greenberg has presented a superb array of articles in this special issue," said Dr. Jung-ran Park, editor-in-chief, Journal of Library Metadata and assistant professor at The iSchool at Drexel. "Through a compilation of systematic research findings employing diverse perspectives and research methods, all eight articles deliver today's practices and key issues and trends on metadata for managing scientific data. Our aim is that this leading edge work stimulates new avenues of research and spurs the development of a better understanding of the role of metadata in the scientific realm."

Among the scholars featured in the tenth volume of JLM is SILS doctoral student Hollie White, whose paper "Considering Personal Organization: Metadata Practices of Scientists" describes in detail her work on the metadata usage of evolutionary biologists and how information gleaned about their metadata usage habits has implications for other scientific fields.

One of the first attempts by metadata scholars to apply ontologies to a topic like Chronic Obstruction Pulmonary Diease, it provides what its authors hope is the first in a number of future steps toward improving the diagnosing and treatment of illnesses like heart disease through sound metadata practices that make critical medical information better organized and more easily accessible by doctors, patients, and researchers.