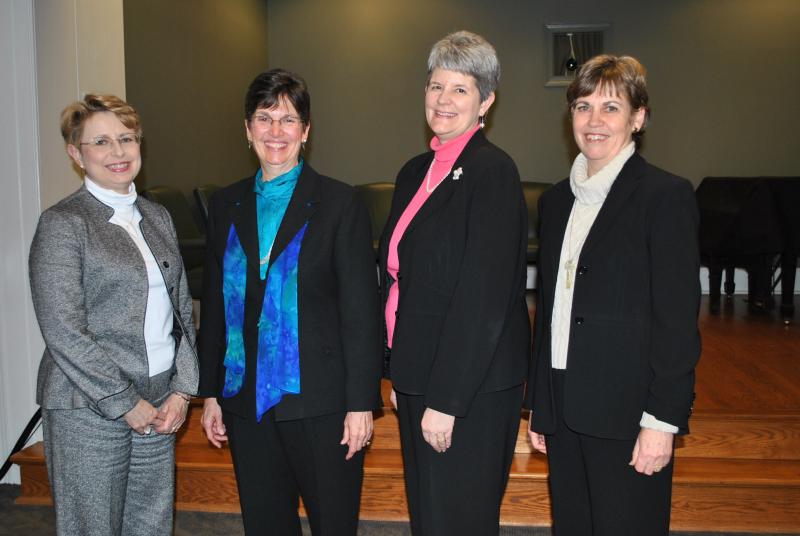 Molly Raphael, the American Library Association's next president, presented "Empowering Voices: Communities Speak Out for Libraries and Libraries Speak Out for Communities" on the University of North Carolina at Chapel Hill campus Monday, March 28, 2011. Raphael described her vision for libraries and interacted with the audience, answering questions from participants.

Raphael also met with students from the School of Information and Library Science at the Frank Porter Graham Student Union later that evening. The interactive discussion titled, "An Evening with Molly Raphael, ALA President-Elect," allowed students an open discussion with the incoming president on ideas and opinions on the current state and future of libraries and information services. This event was sponsored by the Student Chapter of the American Library Associaton (SCALA).

About Molly Raphael
Molly Raphael recently retired after six years as director of libraries at Multnomah County Library (MCL) in Portland, Ore., which serves a population of more than 700,000 with a budget of $60 million and more than 500 employees. During her tenure, she passed a five-year, voter-approved operating levy (more than $176 million for 5 years); implemented many new programs and services; worked with The Library Foundation of Multnomah County to raise more than $12 million. Under her leadership, MCL achieved consistently top rankings among urban public libraries and the highest gross circulation of any library in the country for four consecutive years.

She previously served as director of the District of Columbia Public Library (DCPL). During her DCPL tenure, Raphael launched the first public library service in the nation to serve the deaf community in 1975. While at DCPL, she established and co-chaired the Labor Management Partnership Council; introduced an Enhanced Business Information Center; launched outreach efforts to address early literacy needs for children at-risk and literacy programs for adult new readers; built partnerships with the K-12 schools, academic institutions and many nonprofits; and hosted many visiting foreign diplomats and senior US government officials.

Raphael has served in a number of capacities with ALA as early as 1976, when she was co-founder and first chair of the ALA committee and then the ASCLA Section on Library Service to the Deaf. She was president of the Library Leadership and Management Association (LLAMA) in 2008-09, served on the ALA Executive Board from 2000-03 and has served three terms as ALA Councilor at Large (2003-06, 1998-2002, 1985-89). She has served on many committees and boards during her years.

Her honors include the Arthur Flemming Civil Rights Award for efforts to increase diversity in library employment, collections and programming at Multnomah County Library. She has also received the Simmons College Graduate School of Library and Information Science Alumni Achievement Award, several District of Columbia Labor Management Partnership Council Awards and an Honorary Life Membership in the District of Columbia Library Association.