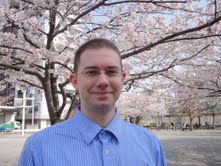 School of Information and Library Science (SILS) alumnus Eric Obershaw is being highlighted as the SILS Alumni Association’s "Featured Alumnus."

Since 2001, when he graduated with an MSLS from SILS, Obershaw has worked in the Business Information Services group at Morgan Stanley in Japan. For the last few years, Obershaw has mainly concentrated on tech, media and telecoms industry research.

"Our group has four centers around the world that allow us to cover our global businesses at any time of the day," Obershaw explained in a recent interview. "Being located in Tokyo, our primary clients are in Japan and Asia, but we also help out with after hours requests from Europe and North America. The work is really fascinating and always changing.  I could be researching the household asset distribution across countries in Asia and then switch to researching the iPhone supply chain."

Obershaw's work has changed since he became the manager of the Business Information Services group in Tokyo.  "I'm not doing much research now," he said.  "Instead, I've been concentrating on vendor management, working with client business units and coordinating the local team."

When asked what was interesting about his experience working in Japan, Obershaw explained that - although his corporate position doesn't allow much interaction with the local Japanese library community - he has found language overlaps particularly interesting.

"One fascinating aspect of working in a global company in Japan is that for any source there is in English, we have a similar source in Japanese," he said. "The librarian in me loves to compare the differences in how the systems are built and present information."

When asked how SILS prepared him for the work he has done and is currently doing, Obershaw responded by emphasizing that SILS helped him develop skills such as thinking objectively about information, analyzing the user community and positioning himself and the services he provides in order to bring the two together.

"Students are exposed to these ideas in every class," he related, "which helps to build a well-rounded foundation of professionalism that can be adapted to any environment. The program also has a good mix of theory and practice. Gaining exposure to a variety of information professionals helped me to understand the opportunities available and to define my own career ambitions."

When asked about the most salient thing he has learned in the past year, Obershaw emphasized the importance of maintaining good client relations.

"Regular meetings and contact are important," he explained, "but if you can find more casual ways to engage clients, they'll often give you insight into their business and needs that you might not get from formal meetings."

Since Obershaw has experienced firsthand the string of tragedies associated with Japan's ongoing earthquakes, he also had much to say about current events in the island nation:

"On the day of the earthquake we got a strong shaking in Tokyo, but there was little or no serious damage," said Obershaw. "The transportation system and power grid were unstable for a few days which caused a lot of uncertainty, but once things settled down, we understood that there was basically no safety or health risk in Tokyo. Everything is mostly business as usual.

"I'm a bit disappointed with the media, especially the foreign media, who have sensationalized the nuclear reactor story to the extent of ignoring the real tragedies of this disaster. I don't think it is possible to overemphasize the extent of damage from the quake and tsunami in the northeast region of Japan (a.k.a "Tohoku").  Entire cities have been washed away and coastlines have been redrawn.  Everyone I know is affected in some way. Everyone has friends, family or colleagues connected to Tohoku and even people living normal lives far away are having difficulties facing the scale of the disaster.

"One thing that continues to impress me about this disaster is the fortitude of the Japanese people. There has been no panic or looting anywhere. People wait in line and help each other. We're having a power shortage in the Tokyo area because so many reactors are offline, but every family and business has gone to great lengths to conserve electricity to avoid taxing the grid and causing unplanned blackouts.  It's amazing what this many people can do when they put their minds to it."

If you know of alumni from the School of Information and Library Science who are making a difference in the world, please contact Karen Sobel at: Karen.Sobel@ucdenver.edu