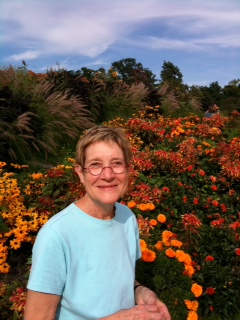 The American Council on Education (ACE) this evening honored Susan L. Perry (MSLS '66), a pioneer in the integration of computing and library services, with the 2011 Donna Shavlik Award in recognition of her lifelong commitment to advancing women’s issues in higher education.

Perry, a distinguished alumna and member of the University of North Carolina at Chapel Hill's School of Information and Library Science Board of Visitors, says she is honored to receive the award.

"As the first librarian to receive the Donna Shavlik award, I am humbled and honored," said Perry. "I graciously accept it on behalf of librarians and informational professionals everywhere."

The award was presented this evening during the Women’s Leadership Dinner hosted by ACE’s Office of Women in Higher Education (OWHE) as part of the ACE Annual Meeting currently underway at the Washington Hilton. Azar Nafisi, author of Reading Lolita in Tehran and Things I’ve Been Silent About, also joined OWHE for the dinner.

The Donna Shavlik Award is named for a former longtime OWHE director who continues to advocate for women in higher education. It honors an individual whose leadership, both at colleges and universities and in national positions, has demonstrated a sustained and continuing commitment to the advancement of women through actions or initiatives enhancing women’s leadership development, career development, campus climate, and mentoring opportunities for women.

“Susan has been a leader on the cutting-edge of technology and library services across borders,” said OWHE interim director Diana Cordova. “In addition, she has never hesitated to take time to serve as a mentor and role model to the younger generation of women leaders as they strive to meet their own goals, which is the essence of the Donna Shavlik Award.”

"This award couldn't go to a more caring and deserving person," said Dr. Gary Marchionini, dean and Cary C. Boshamer distinguished professor at SILS. "Susan's work in the field of information and library science truly is pioneering. She has vision and drive and through her incredible mentoring skills, she demonstrates how to implement that vision to make the world a better place for women who are advancing in their careers."

Susan L. Perry has enjoyed a distinguished career in the field of academic information and technology services. Among other accomplishments, she worked on the program for the first merged library/IT organization in a major research university, the Leavey Library at the University of Southern California. This project was singled out by the Association of College and Research Libraries as an exemplar of modern information services.

Perry was head librarian of the J. Henry Meyer Memorial Library at Stanford University and as college librarian and director of library, information and technology services at Mount Holyoke College. After her time at these institutions, she served as interim president of the Council on Library Information Resources and as senior adviser to the Andrew W. Mellon Foundation. She has been on the EDUCAUSE, New Media Consortium, and Seminars in Academic Computing boards, The Coalition for Networked Information Steering Committee and the American Library Association Council.

In addition to these numerous accomplishments, Perry has worked tirelessly to advance and support the careers of women who have been identified as emerging leaders. In her role as dean of the Frye Leadership Institute, Perry taught, mentored and encouraged several hundred women administrators and continues to this day to serve as a mentor and role model to many of these women as they advance their careers.

Currently, Perry is consulting with the president of the American University of Paris on information services issues and helping her build a faculty, library and IT consortium for the 21 American liberal arts colleges abroad.

Founded in 1918, ACE (www.acenet.edu) is the major coordinating body for all the nation's higher education institutions, representing more than 1,600 college and university presidents and more than 200 related associations, nationwide. It provides leadership on key higher education issues and influences public policy through advocacy.