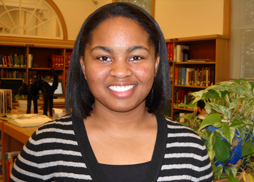 Congratulations to Brittany Michelle Hayes, a junior with a dual major in information science (School of Information and Library Science) and history (College of Arts and Sciences) who is one of 139 inducted into Phi Beta Kappa, the nation's oldest college honorary society, at the University of North Carolina at Chapel Hill.

A student who has completed 75 hours of course work with a GPA of 3.85 or better (on a 4-point scale) is eligible for membership. Also eligible is any student who has competed 105 hours of course work in the liberal arts and sciences with a 3.75 GPA. Grades earned at other universities are not considered. Less than 1 percent of all college students qualify.

Phi Beta Kappa has 280 chapters nationwide. UNC’s chapter, Alpha of North Carolina, was founded in 1904 and is the oldest of six chapters in the state.

Each year, Phi Beta Kappa chapters and alumni associations across the country raise and distribute more than $1 million in awards, scholarships and prizes benefiting high school and college students.

"SILS gave me a wider understanding of the information technology landscape and the ability to understand the underpinnings of the technology, as well as the social issues of users and society."
-Patrick Hodges (BSIS'15)