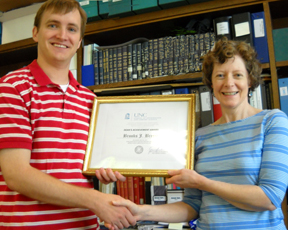 Brooks "Jon" Breece has received the 2011 Pratt-Severn Best Student Research Paper Award offered by the American Society of Information Science and Technology (ASIS&T).  His master's paper, for which he also received a SILS "Distinguished Achievement Award" for best master's paper for the 2010/2011 academic year, is titled, "Local Government Use of Web GIS in North Carolina."

"It was a pleasure to be the advisor for Jon's paper," said Dr. Stephanie Haas, SILS professor. "He identified a significant and timely topic, and did an excellent job on the entire project. His research examined the effect that adoption of Web GIS services had on four North Carolina counties. His findings describe the services the counties offer, who uses them, and, how this had changed the way the agencies do their work. Indeed, his results were greeted with great enthusiasm by those involved in the GIS services throughout the state. I'm delighted to see his work recognized by ASIS&T."

As recipient of this competitive award, Jon will receive a certificate, round-trip travel to New Orleans in October 2011 for the annual ASIS&T conference and up to $500 paid registration. His paper may also be submitted to the Journal of the American Society for Information Science for publication.

The award is intended to "encourage student research and writing in the area of information science." It was established in 1972 and since 1996 the award has been sponsored by the Pratt Institute, School of Information and Library Science, in honor of David Severn.

Breece is an Educating Stewards of Public Information in the 21st Century Project (ESOPI-21) fellow completing an internship with the National Geospatial-Intelligence Agency.


Editor's note: Breece based his approach to writing his paper in part on Dean Gary Marchionini's  study of the Bureau of Labor Statistics, which won the John Wiley Best  JASIST Paper Award best paper award in 2003.
Marchionini, G. (2002). Co-evolution of user and organizational interfaces: A longitudinal case study of WWW dissemination of national statistics. JASIS, 53(14), 1192-1209