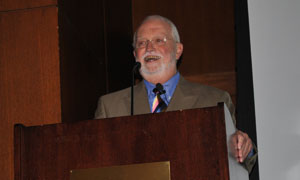 Video of the 2011 Henderson Lecture, delivered by  Dr. Fred Roper as a part of the School of Information and Library Science’s (SILS) 80th anniversary celebrations, is now available via SILS’ Vimeo page. The lecture, entitled “On the shoulders of giants: How SILS achieved the national championship in Library and Information Science,” was delivered by Dr. Roper, SILS alumnus and distinguished dean emeritus of the University of South Carolina’s School of Library and Information Science, on September 23, 2011. Dr. Roper’s speech is an engaging and personal reflection on SILS’ distinguished history from a man who has been an integral part of it for half a century.

The Lucile Kelling Henderson Lecture Series was established in 1990 to honor the memory of Lucile K. Henderson, SILS faculty member (1932-1960) and dean (1954-1960). As an excellent teacher, administrator, counselor and adviser, Henderson made many contributions to the University and to the profession.