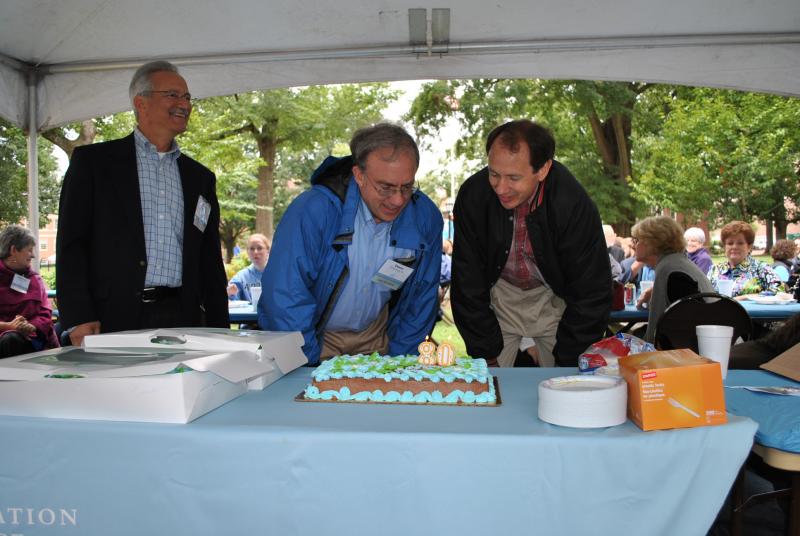 The School of Information and Library Science kicked off its 80th anniversary with a tailgate barbecue on September 17, 2011, the same day the School first held classes in 1931. More than 120 alumni, faculty, students, staff and friends attended the event that was held on the lawn in front of Manning Hall. 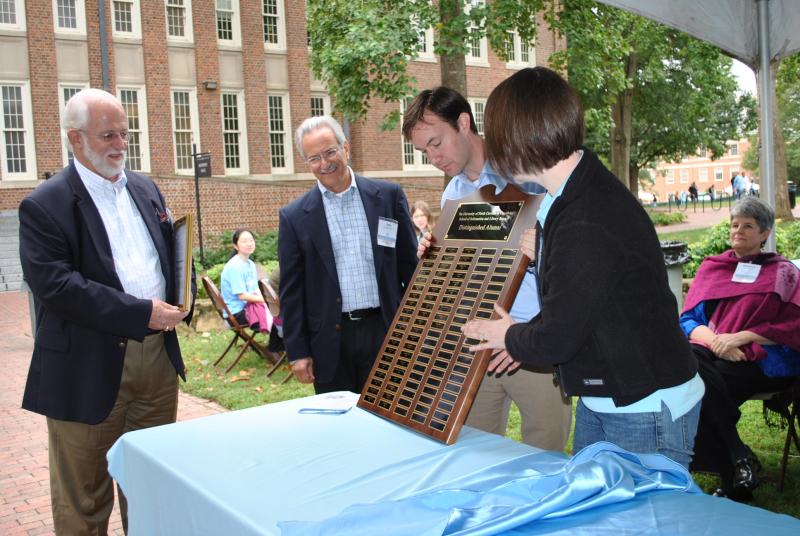 alumnus award, and along with the immediate past president, David Woodbury (MSIS ‘09), unveiled a wooden plaque that includes the names of all of the School’s distinguished alumni on small, brass plates.

The plaque now hangs outside of the SILS administrative offices in Manning Hall. The two also unveiled a special document that lists over 600 names of the SILSAA Lifetime Members. The framed recognition document will hang in Manning Hall where it will continue to recognize these alumni.

Following the formal presentations, the grandsons of the School’s founder, Louis Round Wilson, Dean and Louis Round Wilson Edmonds blew out the candles of the birthday cake to officially mark the beginning of the year-long celebration. 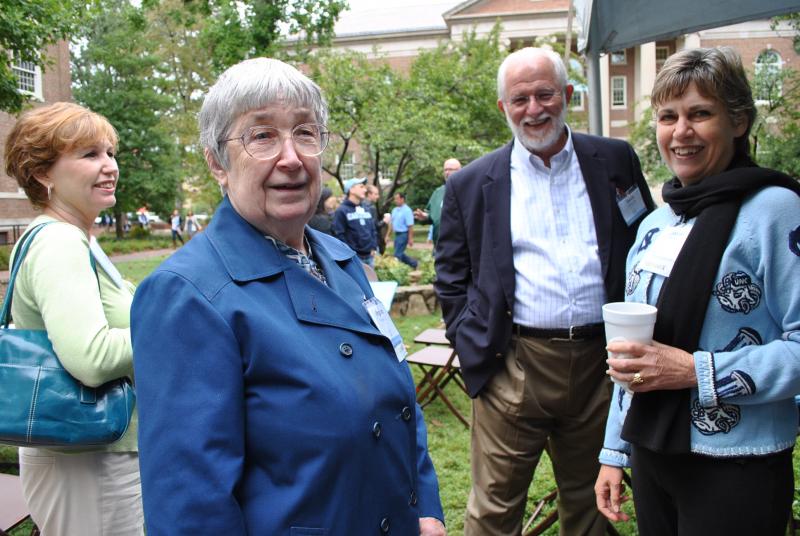 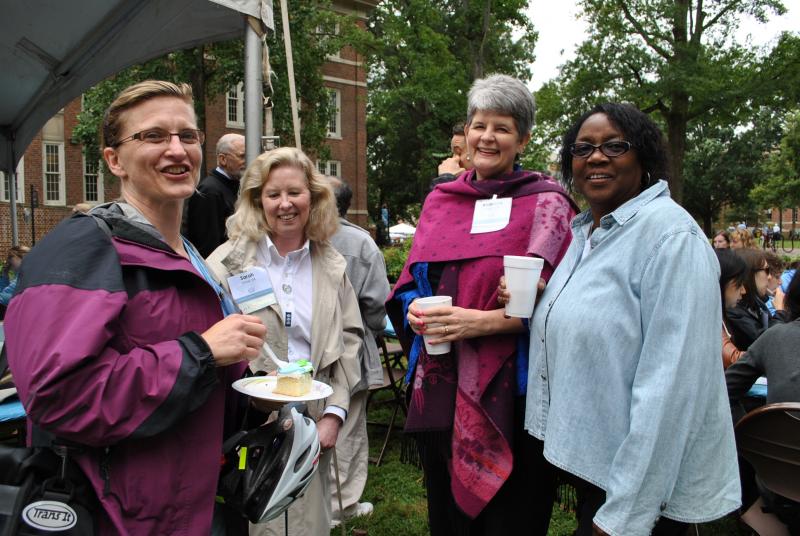 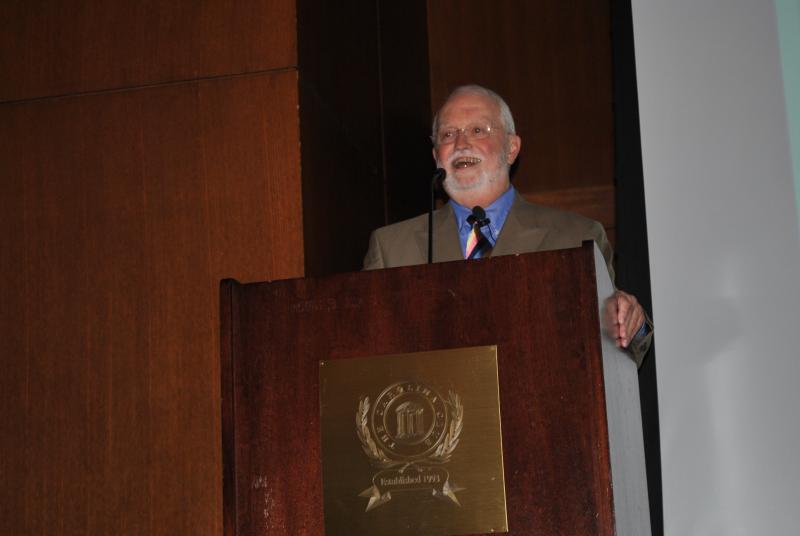 On Friday, September 23. Dr. Fred W. Roper (MSLS ‘62), distinguished dean emeritus of the University of South Carolina's School of Library and Information Science and SILS distinguished alumnus, presented, "On the shoulders of giants: How SILS achieved the national championship in Library and Information Science," in the George Watts Hill Alumni Center to a crowd of more than 100.

The multi-media presentation included an historical overview of the School that began with Louis Round Wilson’s quest for a library School and the Carnegie Foundation’s grant of $100,000 that allowed its beginning, to the many outstanding people who made the School what it is today. The presentation included video clips of Dean Ed Holley and many photos that stirred memories.

In addition to a moving introduction by Dr. Barbara B. Moran, North Carolina State Librarian, Mary Boone (MSLS ‘73) and North Carolina State Representative Alice Bordsen (MSLS ‘83) provided brief remarks about SILS and how the education they received has helped them in their careers. The a cappella group, the Loreleis, provided musical entertainment before breaking for a reception. 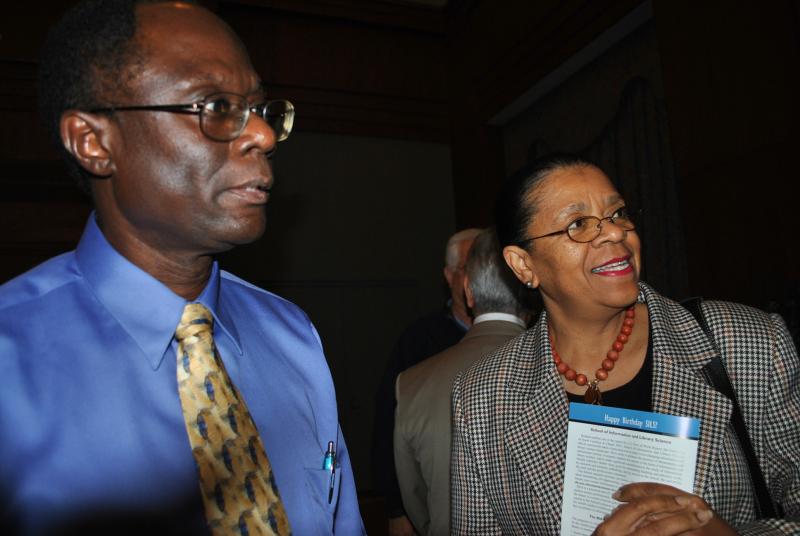 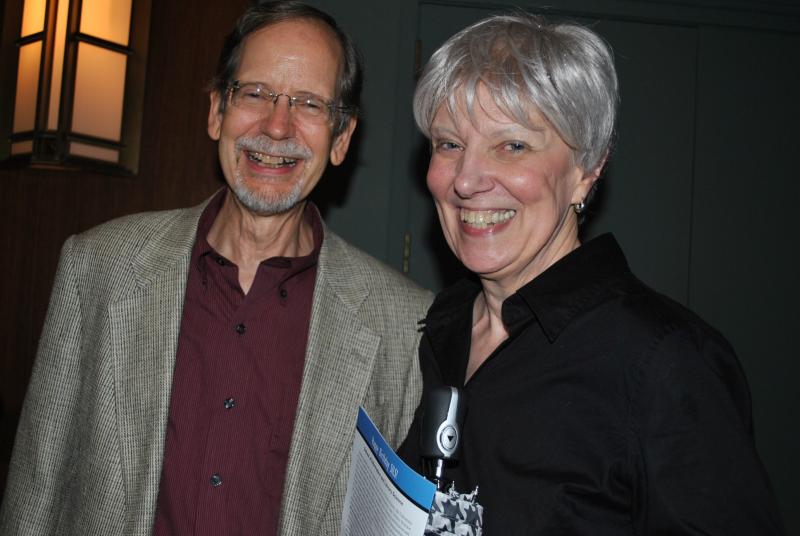 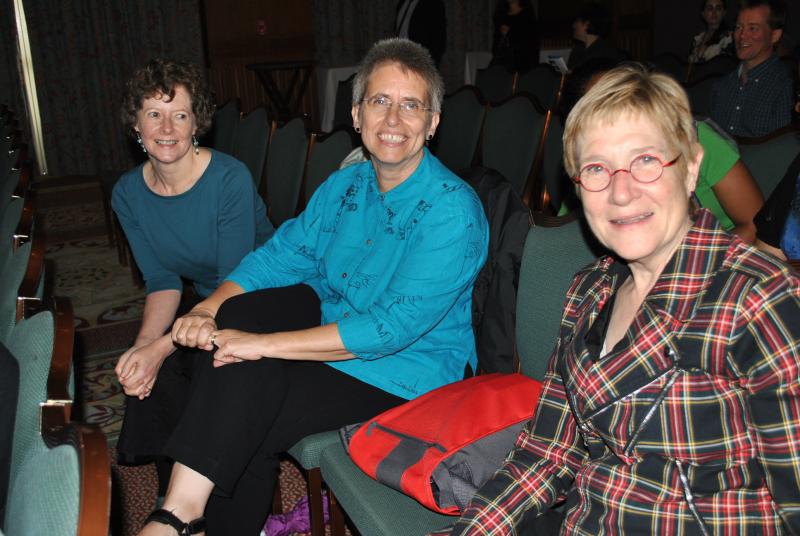 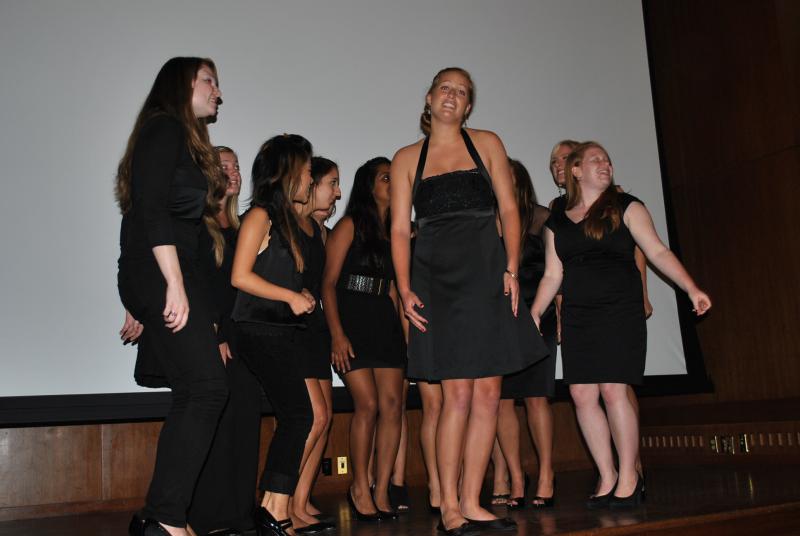 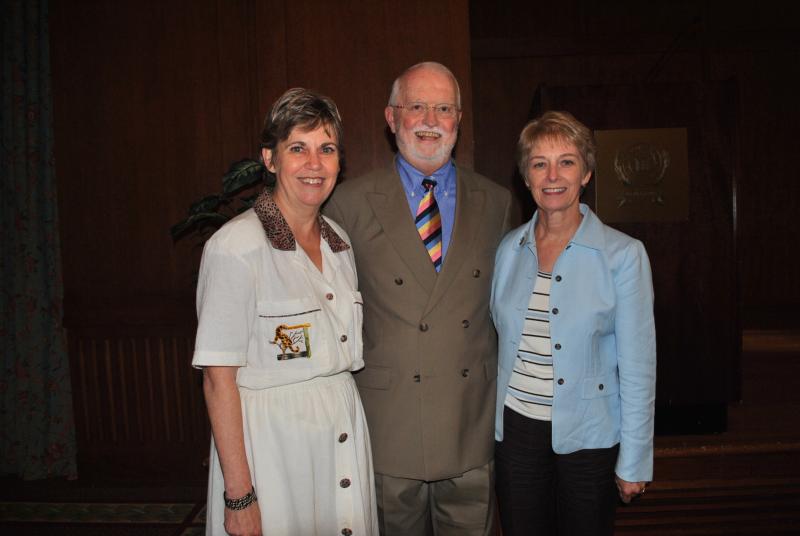 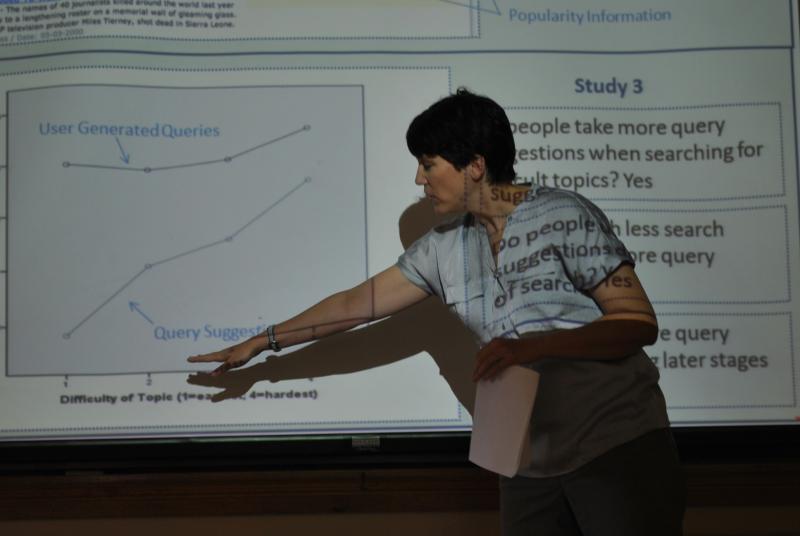 On Saturday, September 24, the School hosted an open house with several activities taking place, some simultaneously. SILS Librarian, Rebecca Vargha and her students created a special exhibit in the Wilson Library titled, “UNC School of Information and Library Science: 80 years of building our information future.” The four-cased exhibit included photos of historical moments in SILS history. At the same time, a SILS historical PowerPoint presentation was offered and an architectural walking tour of campus was led by Will Owen, associate university librarian.

Just before noon, children and adults were entertained by storytelling activities presented by Dr. 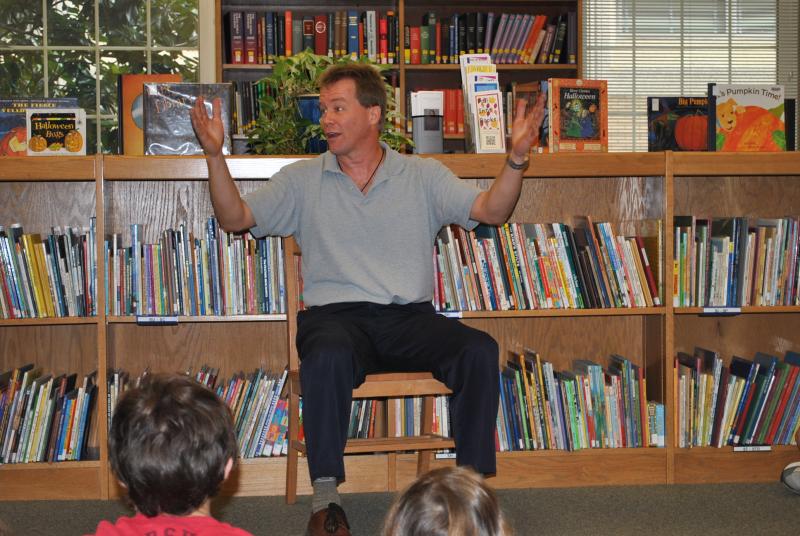 Brian Sturm, SILS associate professor. The children then took part in creating Live Angry Birds as a craft activity. The SILS Book Group discussed This Book Is Overdue: How Librarians and Cybrarians Can Save Us All while Student Services staff, Lara Bailey and Kaitlyn Murphy discussed our programs with potential students. A lively “Research Madness” event provided opportunities for student and faculty to share their research in a three minute timed setting. Those in attendance had an opportunity to view the presentations more closely on the large monitors in the lobby of Manning Hall during a reception.

The final event of the kick-off celebration was the Susan Steinfirst Memorial Lecture in Children’s Literature. The Lecture was held on Sunday, September 25th at Gerard Hall and featured award winning Korean-American author of picture books and novels for children, Linda Sue Park. Park has published works such as The Firekeeper's Son, Seesaw Girl, The Kite Fighters and Yum! Yuck! to name a few. Dr. Gary Marchionini welcomed guests to the campus and introduced special speakers from the State, Mary Boone, North Carolina State Librarian, who offered remarks about her experiences at SILS and the value of libraries and books. Representative Alice Bordsen shared personal thoughts and experiences during her time at SILS as well as her interactions with her mentor, Dr. Steinfirst. Dr. Sandra Hughes-Hassell, professor, another student of Dr. Steinfirst during her time at SILS, introduced the speaker.

Park shared her experiences that led to her most recent book, A Long Walk to Water in an educational and entertaining visual presentation that captured the audience. Dr. Brian Sturm, associate professor, closed the program with an invitation to a book signing and a reception that was held at the Campus Y.M.C.A. A great time was had by all. 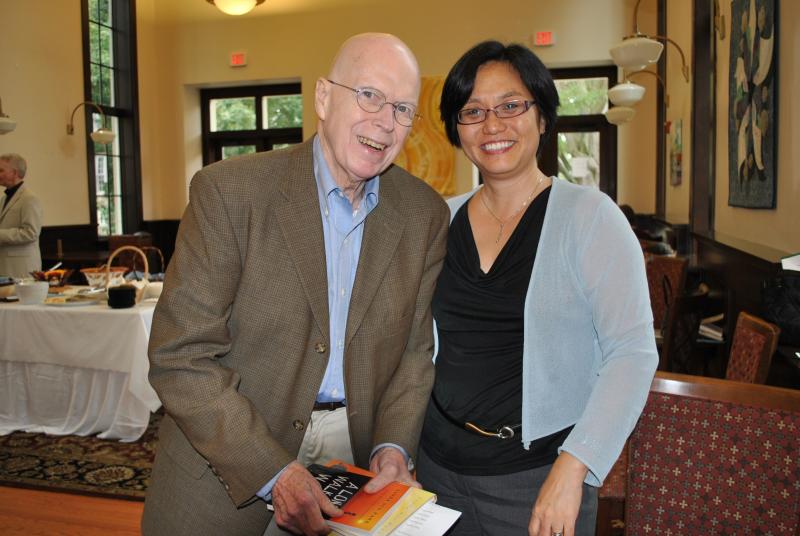 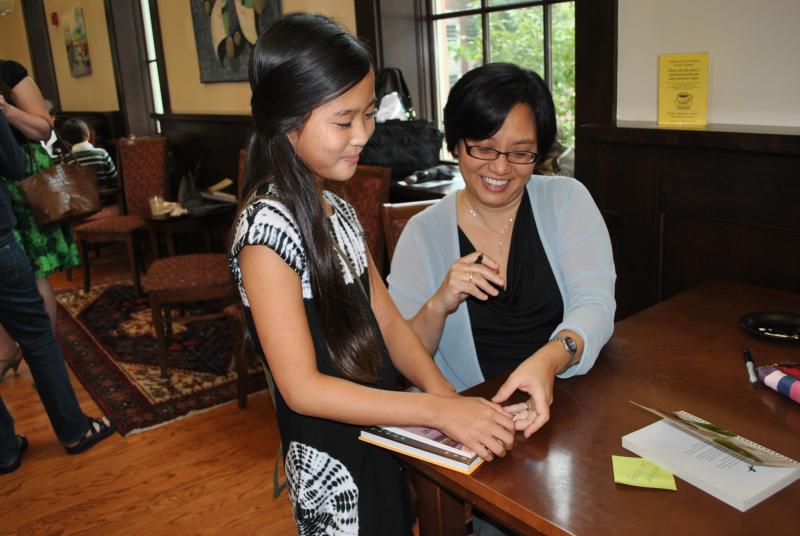 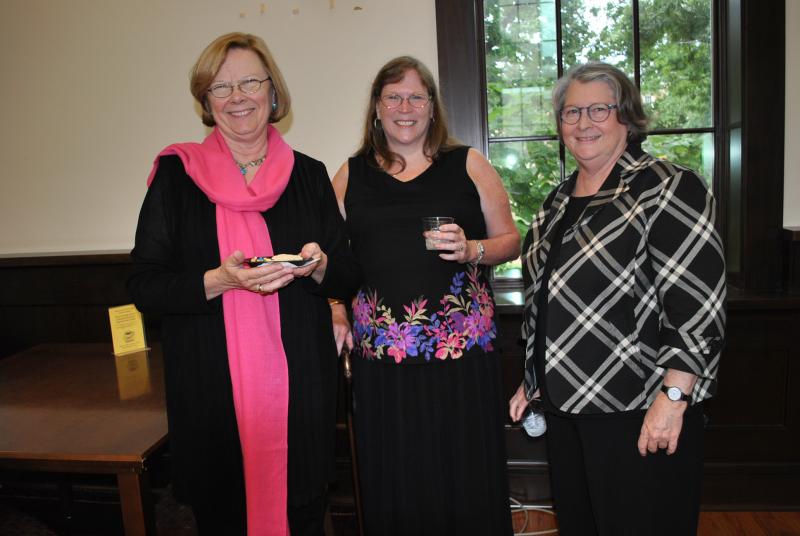