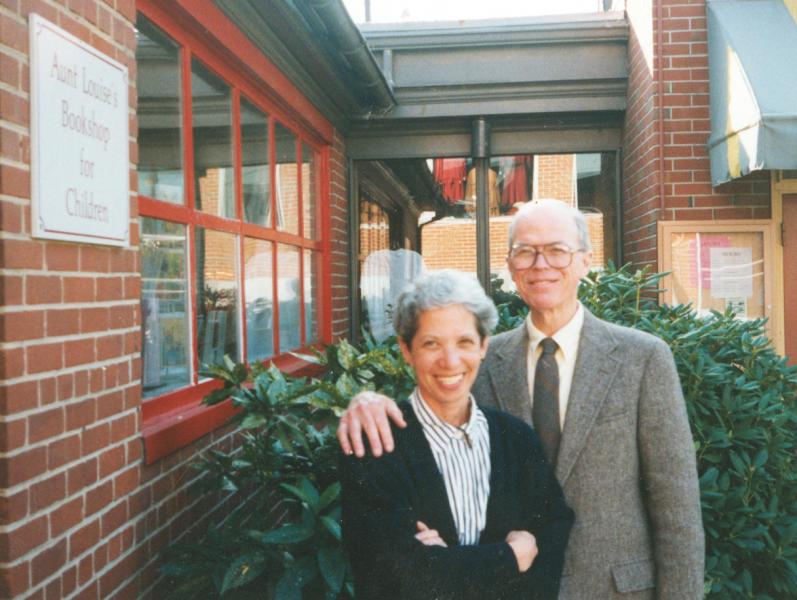 Thanks to the generosity of Gene Story, friend of the School and husband of the late Dr. Susan Steinfirst, four deserving students had the burden of their tuition eased with the very first award of the Susan Steinfirst/Gene Story Scholarship. The scholarship, which was established in 2010 by Story to support graduate students in the School of Information and Library Science, provided funding this year for students who specialize in the area of children’s literature.

The recipients each met the criteria of academic merit, financial need and a desire to specialize in the area of children’s literature. They are Katherine (Kate) Barr, Kristen Street, Megan England Ward and Courtney Minton.

Barr is a 2007 graduate of Mount Holyoke College with a degree in art history and French. She has worked at her local public library, the Mount Holyoke Library and at the Bridgeman Art Library in London—experiences that have fueled her passion for learning. Eager to share this passion with others, she is broadly interested in children’s services and also aims to use her time at SILS to enhance her technical skills.

"I truly appreciate Mr. Story's generosity and the opportunity his scholarship has afforded me," said Barr. "The scholarship made coming to SILS much easier for me. I am excited to apply what I've learned at UNC to a career in children's public librarianship, and am really thankful for all the assistance that the Steinfirst/Story scholarship has given me."

Street is interested in Youth Services and community-integration resources for speakers of English as a second language—particularly Spanish speakers, as she has spent time in Nicaragua, Bolivia and Ecuador.  She majored in creative writing at Appalachian State University and worked for two years in the Watauga County Public Library, most of the time as a Youth Services Specialist.

"The scholarship has meant much to me in that it has allowed me to focus on my studies without having to stress too much about making ends meet," said Street. "Being able to fully focus on what I want to get out of my years at SILS has been a huge help to me, and I'm incredibly thankful for that. I look forward to being able to make the most of my time here, and to bring all of this into my work as a librarian, keeping in mind that a little outside help can make all the difference."

Ward holds a degree in digital arts from Stetson University and a degree in music from the University of Virginia. She has previously researched graphic novels, identity performance, and LGBTQ issues, and she is eager to continue researching these topics with a focus on children and teens during her time at SILS. Her interests as a librarian include advocating for youth, creating safe spaces for them and aiding in their development of multiple literacies.

"This scholarship has made all the difference in my ability to come to SILS," said Ward. "Before, I had no idea how I was going to get here; now, I can't believe all the possibilities I have before me! I really appreciate the opportunity I've been given more than I could ever say."

Minton is a 2006 graduate of the University of Georgia with degrees in advertising and sociology. She has worked as an account coordinator for a global internet advertising agency and as a search engine optimization, strategist for a search marketing firm in Atlanta, GA. She developed a passion for children’s literacy while volunteering at an orphanage in Kenya and mentoring at a shelter for women and children in Atlanta and hopes to gain employment as a school library media specialist after graduation.

While at SILS, Minton has served as a volunteer in a first-grade classroom and an elementary school library and is currently an instructor with the Community Workshop Series and a member of the Carolina Center for Public Service (CCPS) Web Advisory Committee.

The Story Behind the Scholarship
The story of how the scholarship came to be is nearly as interesting as the recipients themselves. In 2010, when Gary Marchionini became dean of the School, he realized that an endowment established by Story in 1997 to honor the memory of his wife Susan Steinfirst, had a large build-up of unused funding. Story and family had endowed the fund to provide a biennial lecture in children’s literature, and because of careful, wise expenditure, the School had hosted successful lectures without using the full spending allocation generated by the endowment, and over time, the unused monies had accrued to a substantial sum. Since student support is a major priority for the School, Marchionini approached Story and proposed the overage be used to fund scholarships for students interested in studying children’s literature. Story enthusiastically agreed.

Dr. Steinfirst was a professor of children’s and young adult literature at SILS from 1976 to 1996. Known for her dedication to her students and her equanimity and humor in staff meetings, Susan left an indelible imprint on her colleagues and the School.