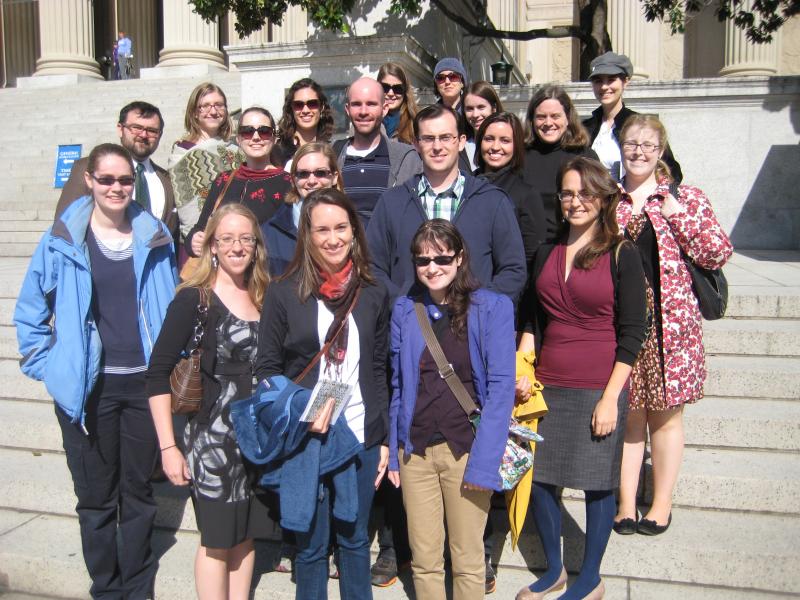 After traveling from Chapel Hill to Washington D.C. October 19th, students got an early start the next morning and visited the Folger Shakespeare Library. The Folger houses the world’s largest collection of Shakespeare works and materials and is a world-renowned center for research on Shakespeare, the Renaissance and the early modern age. The students were taken on a tour of the Folger by Betsy Walsh, head of Research Services, and Dr. Georgianna Ziegler, head of Reference. Highlights at the Folger included the students viewing the King James Bible exhibition. Some of the students also attended that evening's performance of Othello.

Following the Folger tour, the group met in the National History Museum for a tour and an overview of Smithsonian Institution (SI) Libraries and Digital Services. According to its Web site, the Smithsonian Institution is “The world's largest museum and research complex, with 19 museums, 9 research centers and more than 140 affiliate museums around the world.” SILS students were provided an introduction about the Smithsonian by Director Nancy Gwinn, along with a brief information session on SI internship opportunities.

The Smithsonian Museum of Natural History Library is a relatively new facility. The students learned about the common learning/collaborative spaces they had built in for their scientist patrons, which included easily moveable tables, white boards, open spaces and even a Keurig coffee machine.

Finally, after being given a chance to discuss SI’s Digital Services Program, the students had their choice of two of four tours including:

• Dibner Library of the History of Science and Technology

All four of these destinations were chosen as options because of their pertinence to studies and possible careers for SILS students. The students report that the four librarians who led the mini-tours were all exceptional individuals, and took time to answer a great deal of questions.

As a special treat, the students toured the National Archives and Records Administration (NARA) building. Sam Anthony, Tar Heel alumnus and special assistant to David Ferriero, archivist of the United States, was their tour guide. Students were shown the NARA Research Center and attended a question and answer session where they were able to discuss career opportunities and network. Anthony also took the students on a personal tour of NARA's Food History Exhibit, "What's Cooking Uncle Sam?" He presented the trip coordinator, Beth DeBold, with the archivist of the United States' challenge coin, only the fifth coin he has given out.

The final SILS tour destination was the headquarters of NPR, the national news radio programming company that reaches over 26 million listeners on a weekly basis. The students were given the opportunity to visit the library that supports this booming radio station, which was led by NPR’s librarian, Kee Malesky and other staff.