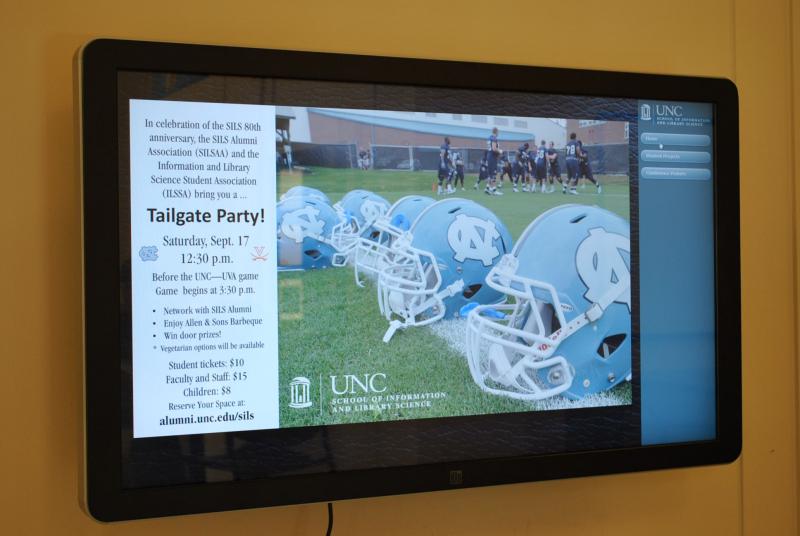 Even as School of Information and Library Science (SILS) students were making the transition from summer into a new semester, a number of changes were afoot at SILS itself. This fall, several faculty and staff are joining new students in becoming oriented to life in Manning Hall.

Personnel Additions and Changes
Heather Lewis joined the staff as health informatics coordinator with the Carolina Health Informatics Program (CHIP) in June. Michelle Taylor, previously a part-time temporary employee helping SILS with accounting, has been appointed to the administrative staff as an accounting technician. Long-time volunteer, Edgar Marston, has officially joined the SILS team part-time to assist with event management, public relations and a myriad of other important tasks. And, at the Environmental Protection Agency Library, Cynthia Flanagan was hired as library assistant responsible for assisting with interlibrary loan services.

Additionally, some familiar faces on the administrative staff have taken on new assignments over the summer and members of the faculty received new titles. Tammy Cox has been promoted from director of Business Operations to assistant dean of Administration, charged with managing the main office staff and SILS' finances including developing financial strategies for the School. Aaron Brubaker (MSIS ‘06), previously assistant director of Instructional Technology, has been appointed interim director of Information Technology after Scott Adams (MSLS '98) stepped down. Dr. Deborah Barreau (MSLS '86) has been appointed Frances Carroll McColl Term Professor, Dr. Sandra Hughes Hassell (Ph.D. '98) was promoted to full professor and Dr. Christopher (Cal) Lee was promoted to associate professor this summer.

Three new SILS faculty members arrived to Chapel Hill including Jaime Arguello, who brings an expertise in information retrieval to the school, specifically aggregated search, described on his Web site as  “the task of providing users with integrated access to multiple systems within a single search interface.”

Robert Capra joins the faculty in July after having worked as a post-doctoral fellow at SILS. Capra’s work, according to his Web site (http://ils.unc.edu/~rcapra/), is “unified by an interest in how people find, refind, manage and share electronic information, and how technology can help support these tasks.”

Zeynep Tufekci, previously an assistant professor in Sociology at University of Maryland, Baltimore County (UMBC), joins the SILS faculty with an affiliate appointment in the Department of Sociology. Her research, according to her blog focuses on “collective action and social movements, complex systems, surveillance, privacy and sociality.”

The entire community joins Dean Gary Marchionini in congratulating all, and welcoming them to the SILS family.

New Spaces
In addition to new staff and faculty around SILS, students will need to get used to finding familiar faces in new places. With only a few days’ notice before the start of the semester, Susan Sylvester (SILS ‘05), executive assistant to the dean, expertly coordinated nearly a dozen faculty and staff moves to different offices. Several new office spaces and one new conference room were converted to SILS’ use on Manning Hall’s main floor (directly across the lobby from the main office) when the administrative offices of the Odum Institute for Research in Social Science were moved to rooms 01-14 on Manning Hall’s ground floor. Many reported enjoying the different views of Manning Hall’s leafy surroundings from the windows of their new offices.

And new offices for faculty: 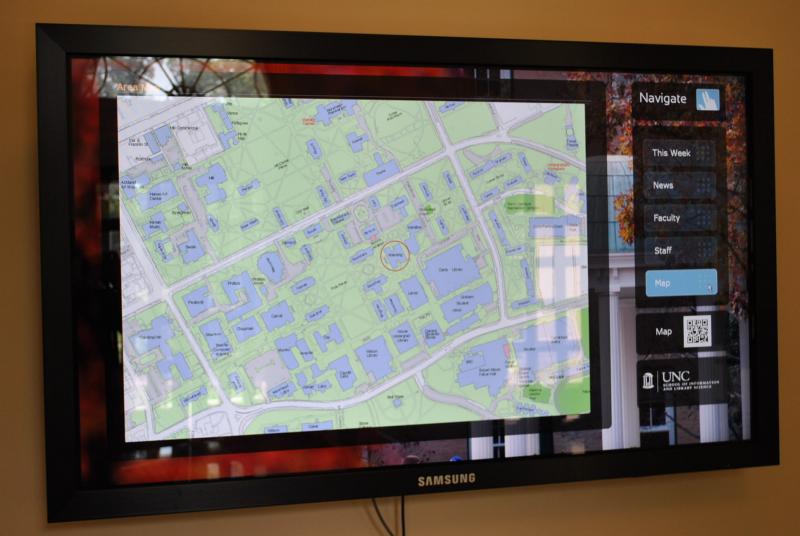 Enhanced Technology
As they returned for the new semester, students also noticed some changes in technology in Manning Hall. The most immediately apparent are the large touch-screen monitors in the main lobby. The larger of the two monitors is used to display information such as faculty and staff directories, a campus map, upcoming events and news headlines.

The second monitor (pictured at the top of this article) will be used to display SILS research posters, student projects, new programs and information about upcoming events - especially the year-long 80th anniversary celebrations. Master’s student, Rob Cooper spent much of the summer designing, testing and implementing the technical aspects and usability of the second monitor.

Technological enhancements have also been made in Manning Hall classrooms 208 and 304.

“Each room is now equipped with two high definition video cameras (front and back), wall-mounted speakers and ceiling microphone arrays for superior audio quality,” said Brubaker. “These components allow for a much-improved Web conferencing experience and lay the groundwork for future capabilities.”

The podiums, equipment racks and instructor PCs in both rooms have been updated as well. Reassuringly, Brubaker says, “The way you use the classroom computer or your personal laptop is unchanged in both rooms.” Any issues with equipment upgrades can be brought to his attention via e-mail at brubaker@unc.edu.