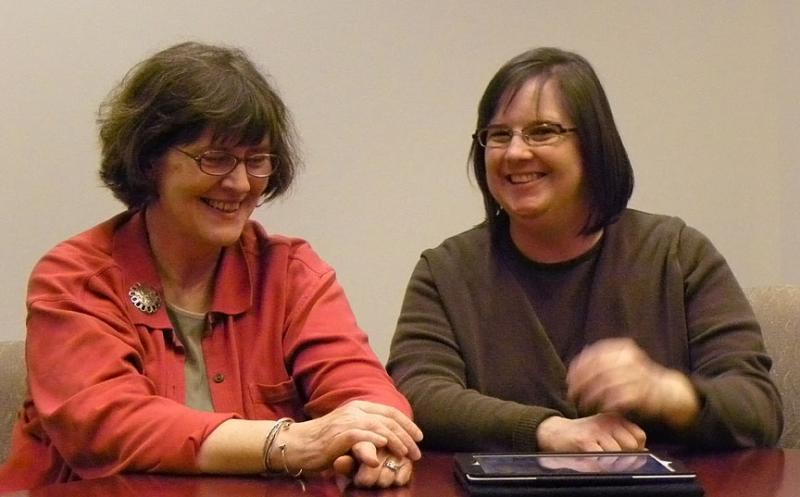 “The judge’s ruling is significant not only for Georgia State University (GSU), but for all educational fair use,” said GSU President Mark Becker about the ruling in a GSU copyright case. In 2008, several publishers brought lawsuit against GSU for its use of copyrighted material in higher education e-reserves. The outcome of this case is very important to all scholars, especially the academic library community, as it could impact the future of copyright law in the digital age.

In a decision issued in June 2012, Senior U.S. District Court Judge Orinda Evans found that the vast majority of the case’s alleged infringements were fair use, and ruled overwhelmingly in GSU’s favor. Two graduates of UNC’s School of Information and Library Science were key players for Georgia State University in the lawsuit. Both were first deposed and then called to testify about library practices at the trial that took place in federal court in Atlanta between May and June of 2011.

Laura Burtle (MSLS ’94) is GSU’s associate dean for Digital Library Services and Special Collections and has been involved in the lawsuit since its beginning in 2008. Burtle’s testimony was cited a number of times by the judge when determining whether digitized material not accessed by students was considered an “infringing use” of copyright. Judge Evans determined that such use was not infringing citing a legal doctrine by which a court refuses to consider “trifling matters.” Evans decision has the potential to benefit massive digitization projects where the text is treated like data rather than like words to be read (non-consumptive uses such as text mining).

Burtle’s colleague in the lawsuit is Nancy Seamans (SILS ’78), dean of Libraries at Georgia State University. Seamans became the named defendant in the lawsuit when she came to GSU in 2008.

“Something that really became apparent was the conviction that we were right, and that we needed to stand up for the fact that we were right,” said Seamans in an interview with GSU Magazine, “That’s pretty compelling, to say, ‘We have done some things, and we think that we are completely legal in what we are doing,’ and then to defend them.”

The plaintiffs in the case have appealed Judge Evans’ decision. It is expected that the appeal will be heard in the 11th district court in early 2013.