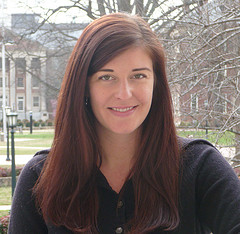 Samuel Goldwyn once said, "The harder I work, the luckier I get."
This may be the view that doctoral student and ELIME-21 fellow has had since her lucky day began last Friday, April 13th.

On Friday, Click presented “Social Movements and Libraries: From Tahrir Square to Occupy Wall Street” to a large group at an invited academic lecture in Nashville, Tennessee’s Belmont University’s Lila D. Bunch Library. The lecture, which was held in honor of National Library Week, focused on the many social movements and upheavals taking place around the world, with an emphasis on the role libraries and librarians have had and will continue to have (see abstract below).

Click’s luck continues today as the ACRL Insider selected her as its “Member of the Week.” Click has been a member of the Association of College & Research Libraries since 2009 and was recently named the 2012 ACRL IS-sponsored ALA Emerging Leader. Her interview is posted on the ACRL Insider at: www.acrl.ala.org/acrlinsider/archives/5204

Abstract of Amanda B. Click's Presentation

2011 was a year of social movements, bringing change and upheaval all over the world, from the Middle East and North Africa to the United States. The Arab Spring, and particularly the Egyptian Revolution, are considered by some to have been successful as a result of protesters’ use of technology and social networking tools. There are many ways to support a social movement, and the efficient and effective sharing of information is one of them. Libraries, librarians, and other information professionals have been essential participants in both promoting and preserving these movements. The Occupy Wall Street protestors developed The People’s Library to support the movement. Librarians in Egypt continually work to save the artifacts of the revolution, from photographs to flyers to oral histories. This talk discusses the different ways that the creating, sharing, and preserving information has played an important role in the recent social movements.

Click is a SILS doctoral student and was selected as an Educating Librarians in the Middle East: Building Bridges for the 21st Century (ELIME-21) fellow.

About the ELIME-21 Program

The School of Information and Library Science at the University of North Carolina at Chapel Hill, in conjunction with the Carolina Center for the Study of the Middle East and Muslim Civilizations, has established a new program, “Educating Librarians in the Middle East: Building Bridges for the 21st Century: ELIME-21,” which will lead to the development of educational opportunities for librarians and information professionals, by partnering with two universities in North Africa and the Middle East, the American University in Cairo and Al Akhawayn University in Morocco.