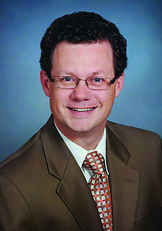 "I am delighted that Jay Dominick has accepted Princeton's offer to become the University's next CIO," said Provost Christopher Eisgruber, to whom Dominick will report. "Like Betty Leydon before him, Jay comes to Princeton with a proven track record of success as a leader in academic IT management."

Eisgruber said that Dominick impressed the search committee with his "deep commitment to academic values and his understanding of Princeton's mission, his service-oriented approach to IT operations, and his experience with a broad range of initiatives in both academic and administrative computing." He added, "I am confident that he will be an effective and responsive leader for Princeton's Office of Information Technology (OIT)."

Serving as a member of President Shirley M. Tilghman's cabinet, the CIO leads more than 250 staff. Eisgruber noted that among an array of responsibilities, the CIO will focus on priorities including: sustaining the service-oriented practice of OIT; assisting with new initiatives in the use of online pedagogy; addressing IT security needs; and implementing systems improvements related to the University's financial systems and reporting.

Dominick said he is looking forward to his new position at Princeton. "I am honored and delighted to have been chosen for this position and sincerely appreciate the trust placed in me by Provost Eisgruber and President Tilghman," he said. "I look forward to continuing the rich tradition of excellence that Princeton has become known for under Betty Leydon's leadership. Princeton has taken bold steps in defining the future of teaching and research in the digital world and I am excited to be joining that effort."

Dominick has served as vice chancellor for information technology and CIO at UNC-Charlotte since 2008. For 12 years previously, he was the first CIO at Wake Forest University, after holding increased levels of responsibility since joining the institution in 1991. He also worked at the Research Triangle Institute in Research Triangle Park, N.C., and served as an officer in the U.S. Air Force. During his career, Dominick has taught courses in IT and telecommunications.

Dominick earned a Ph.D. in information and library science at the University of North Carolina-Chapel Hill, which is his undergraduate alma mater. He holds a master's degree in national security studies from Georgetown University and an MBA from Wake Forest.