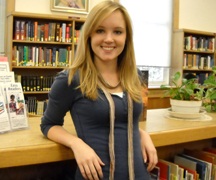 The School of Information and Library Science (SILS) of the University of North Carolina at Chapel Hill is pleased to announce that Katie Meyer will be initiated into the Phi Beta Kappa academic honor society on Nov. 19, 2012.

Meyer, a senior Bachelor's in Information Science (BSIS) student, will be inducted into the Alpha of North Carolina Chapter of the national honor society, the oldest and most prominent such society in the country.
"I’m really excited for the Phi Beta Kappa induction ceremony," she says. "I’ve wanted to be a member for a while now and it’s a big honor." At SILS, Meyer has focused on front-end Web development and user experience design.
"I’ve been interning at IBM as a Web Content Manager for a year and a half now," she says, "and that experience — combined with my courses at SILS — has helped me realize that I want to pursue a career designing and building Web sites. To that end, I’ve been taking courses in Web development, user experience design and human-information interaction this semester."
Her induction into Phi Beta Kappa is not the only recent good news for Katie. She has also accepted a Web User Interface Software Developer position at IBM, to start after she graduates. Meyer says she's thrilled about both the Phi Beta Kappa induction and her new position at IBM, and thankful to SILS for positioning her to succeed.
"I couldn’t have gotten such a great job without the excellent education I received through SILS!"
"Leadership is a skill that can be learned as well as a habit to cultivate, and I feel that SILS faculty really nurture that among the students."
-Casey Rawson (PhD'11)