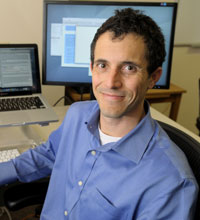 Dr. Miles Efron (MSIS ’00, Ph.D. ’03), who has been chosen by the School of Information and Library Science (SILS) at the University of North Carolina at Chapel Hill Alumni Association Board as their latest featured alumnus, went from SILS to the frontline of some of the most exciting projects in LIS and information technology.

An assistant professor in the Graduate School of Information and Library Science at the University of Illinois at Urbana-Champaign, Efron’s work on information retrieval (IR) has lately been focused on projects related to microblogging and the digital humanities.

“Most of my research focuses on learning to make search engines better,” says Efron. While a lot of IR research has to do with complex statistical modeling, Efron says it always comes back to the people who are using the search engine. “Last semester I  taught a Ph.D. seminar called “human-centered information retrieval”, a term coined by Gary Marchionini.” Marchionini, is the dean of SILS and Cary C. Boshamer Distinguished Professor. “Human-centered information retrieval is concerned with considering peoples’ talents and idiosyncrasies as an integral part of the search process.”

Also central to search and to Efron’s work is the problem of time.

“One of the key problems in IR is making our predictions of document relevance more accurate," said Efron. "Right now, a lot of my work deals with using time as a feature in relevance prediction. The objects we deal with in IR – languages, collections, documents, information needs – all change over time.  This can be problematic.  But I think it can also be informative. Change is meaningful, and meaning is often forms the crux of relevance.” It’s this temporal aspect that got Efron interested in search for microblogs.

“In microblog IR, time plays a very strong role," he notes. "Because microblogs (such as Twitter feeds) arrive incrementally-but in a huge volume, I have found that studying the temporal dynamics of tweets can help us in identifying useful information.

“For instance, the query 'state of the union' issued at two different times might have very different temporal relevance criteria,” Efron says. “The day before the President's address, a searcher using this query might be happy with tweets that are a day old, so long as they are of high quality. But during the address itself, a person using the same query might want to see on-topic data in real time. In this case, we need to predict not only the topical relevance of a tweet (“is it about the state of the union?”), we also need to infer the implicit “expiration date” for relevance.”

Efron’s research on temporal aspects of IR has also led him to work on another recent noteworthy Web service: Google Books. How language changes over time, and how that affects keyword search, is becoming more of a challenge as more historical materials are digitized.

“Specifically,” he says, “we’re dealing with the problem that in a collection such as Google Books, material written in English shows tremendous orthographic variation. Fourteenth-century English is quite different – in vocabulary and spelling – from more modern English. If we do retrieval using simple keyword matching, we’ll have a hard time finding historical variants of texts we might be interested in.”

“Before the 18th century, written English was very fluid, which makes the task of IR hard. This project is based on the idea that we should be able, using a query written in the English of one century, to retrieve related passages written in the vernacular written of any century.”

When he reflects on how SILS prepared him for his career, he says that Dr. Robert Losee’s information retrieval course made all the difference.

“I took the course during my first semester as a Master’s student at SILS, said Efron. "Going into the class, I had only the faintest idea of what IR was. By the time December came around, I knew that IR was what I wanted to work on.”

The opportunity to be involved with serious research projects as a Master’s student was also central to Efron’s development as an information professional.

“I worked as a programmer for Paul Jones at ibiblio; I contributed to grant-funded projects; I participated in informal seminars,” says Efron. “Coursework at SILS was great, but simply being there put opportunities in front of me that taught me intangible things about contributing to a research community.”

Efron now works with LIS students every day, and he thinks they are becoming increasingly comfortable navigating the range of opportunities the field has to offer.

“I have noticed in recent years that fewer students seem worried about the library vs. information science tension that comes up from time to time," he said. "In the past, this was often contentious and troublesome, as people decided how to allocate their attention during coursework, research and summer planning. I always felt that it was a false choice. Students today seem open to considering our field broadly.”