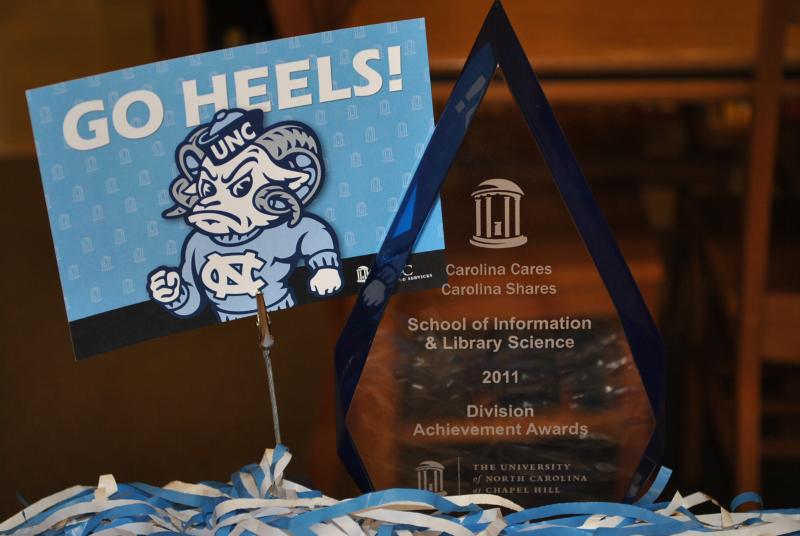 An achievement award acknowledging contributions to the 2011 North Carolina State Employees Combined Campaign (NCSECC) was presented to the School of Information and Library Science (SILS) as a participant in UNC at Chapel Hill’s campaign team. The award was presented to divisions within the University that had over 30 percent participation. The total participation in SILS reached 50 percent. Out of the more than 25 divisions on the UNC at Chapel Hill campus, SILS was one of only 12 to receive this recognition.

NCSECC is an annual statewide initiative to raise money for various charitable organizations.

“Every university and every state agency works together once a year to solicit money for charity from their employees,” said Tammy Cox, assistant dean of Administration at SILS. “If an employee doesn’t want to pick a specific charity, the organization determines which charitable organization gets what, based on a formula.”

Every contributing individual is allowed to choose a charity to which he or she wishes to donate, and if no specific charity is chosen, Campaign officials divide the money among eligible recipients. When an individual contributes, his or her name is entered into a weekly drawing for various prizes, which this year included gift cards, bicycles, trips and show tickets — among other gifts. Although giving is individual, total progress is measured for each participating university or state agency. In fact, UNC at Chapel Hill has its own team tagline, “Carolina Cares, Carolina Shares.”

“This year has been especially challenging because of the economic crisis, so we focused on number of individuals contributing rather than think about total dollars,” said Cox. “We were very successful.”