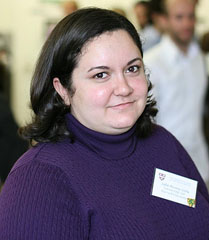 School of Information and Library Science (SILS) graduate student, Sofia Becerra-Licha, is one of five selected to receive a travel grant to attend the 2012 Music Library Association  Annual Meeting in Dallas, TX. MLA awards the Kevin Freeman Travel Grant to students, recent graduates or other colleagues who are new to the profession for support to attend the MLA annual meetings.

Becerra-Licha is a second-year student in the MSLS program at the University of North Carolina at Chapel Hill (UNC at CH) and will graduate in May 2012 with a concentration in Archives and Records Management. She currently works as a Carolina Academic Library Associate for UNC-CH's Stone Center Library for Black Culture & History, and as a part time cataloger of sound recordings for UNC-CH's Southern Folklife Collection. She has also volunteered as an archival processor in Duke University's Rare Book, Manuscript and Special Collections Library, and her student activities at UNC-CH include serving as a Peer Mentor, as vice president of the Student Chapter of the Society of American Archivists and as founding co-chair of the student-led Diversity Taskforce. Additionally, she is currently chair of MLA's Music Library Student Group.

She holds a BA in music and Spanish from Agnes Scott College and an AM in Ethnomusicology from Harvard University with a primary research area of the Chilean nueva canción. She completed coursework requirements at Harvard for a secondary Ph.D. concentration in Romance Languages & Literature (Spanish). She hopes to combine her studies to pursue a career in audiovisual archiving and music librarianship.

Becerra-Licha adds this award to two previous awards presented by the American Library Association. She was selected as a 2010-11 Spectrum Scholar and received the 2010 OCLC/LITA Minority Scholarship in Library and Information Technology.

The other four recipients of the travel award included Sonia Archer-Capuzzo from the University of North Carolina at Greensboro; Victoria Chu, who received her MLIS from the University of British Columbia (UBC) in December 2011; Stephanie Lewin-Lane, a graduate student in Library and Information Science and Music History at the University of Wisconsin-Milwaukee; and Pamela Pagels, who holds the dual MA in Musicology/MLS with specialization in Music Librarianship from Indiana University and a Master of performance in double bass from Northwestern University.

"I felt incredibly prepared, coming into this job with both business and technical skills that I learned in SILS. Being able to 'speak both languages' certainly gave me an edge going into my career at MetLife."
-Lily Fagan (BSIS'16)