The School of Information and Library Science at the University of North Carolina at Chapel Hill celebrated the 2012 graduates on Sunday, May 13th during the commencement ceremony held in the Great Hall of the Frank Porter Grapham Student Union. 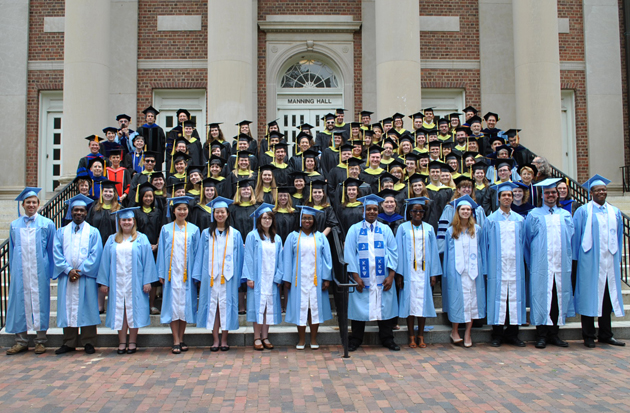 Beginning with a class photo on the steps of Manning Hall, the more than 100 graduates and faculty members joined the procession to the Great Hall for the ceremony. Guests, faculty, students and staff were welcomed by graduate, Amanda Foster (MSLS '12). Foster recognized the support of the families who believed in the students during their educational process and thanked them. She mentioned the many friendships she had made while spending time on group projects or socializing 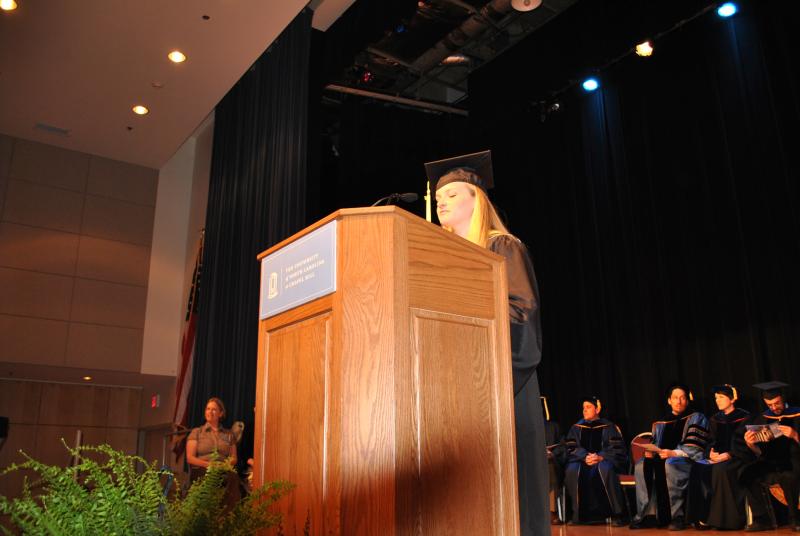 at Happy Hour, which tied back to an article in The Wall Street Journal titled, "10 Things Your Commencement Speaker Won't Tell You." The article said that "Research tells us that one of the most important casual factors associated with happiness and well-being is your meaningful connections with other human beings."

Dean Gary Marchionini welcomed the audience to Chapel Hill and wished all the mothers in the audience a happy Mother's Day. He also introduced special guest, David Ferriero, archivist of the United States, who had been nominated by the School and received an Honorary Doctorate of Laws Degree during the campus-wide commencement ceremony held earlier in the morning at Kenan Stadium at the University of North Carolina at Chapel Hill. Dean Marchionini reminded the students that they are in charge of their future and that they have the needed skills to meet the many challenges and changes of the fields of information and library science.

"The faculty and I have great expectations for you as you enter a profession that's constantly changing," said Marchionini. "We know that with the knowledge and enthusiasm you possess, you will leave your mark of quality and integrity on any position in which you serve." 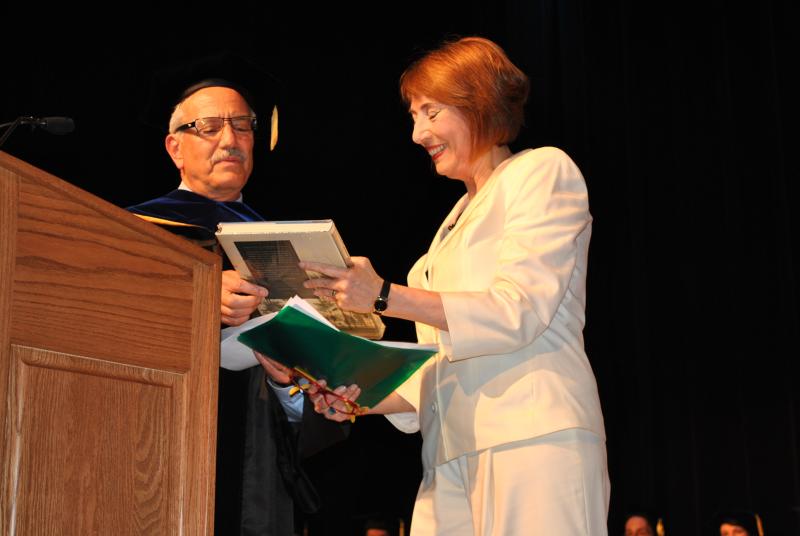 The keynote speaker was Dr. Cathy Davidson, Ruth E. DeVarney professor of English at Duke University and the John Hope Franklin Humanities Institue professor of Interdisciplinary Studies, who presented "Connection in the Age of Information"to the audience of more than 600. She discussed the previous three information ages and the current fourth information age that produces a great amount of information each day.

"How much information? 294 billion emails, 2 million blog posts and 864,000 hours of YouTube video churned out each and every day," said Davidson. "We need you, Information Scientists!  No one ever dreamt the World Wide Web would connect us like this, each to the other, massively and globally, in such a short time in so many ways--personal, economic, intellectual, social and political."

Dr. Davidson has graciously provided her speech in its entirity. See her thought provoking and interesting speaking remarks here 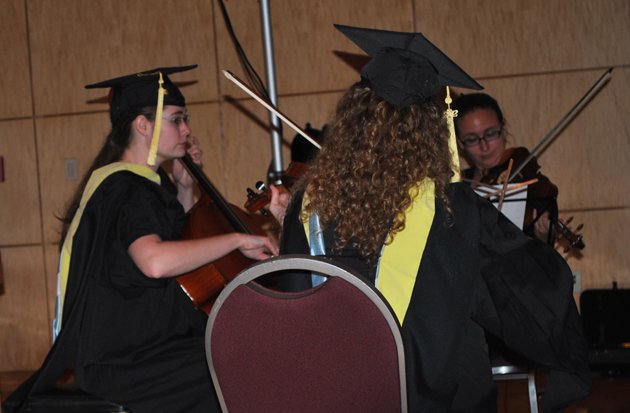 For the first time during a commencement ceremony, there was a lovely musical performance by a stringed trio composed of SILS students. Chelsey Masterson, on violin; Hannah Pierce, on cello; and Veronica Koven-Matasy, on the viola performed Mozart’s “Divertimento for Violin, Viola & Cello in E-flat major, K. 563 VI. Allegro.”

Several awards were presented to acknowledge the many achievements during the academic year.

Dr. Sandra Hughes-Hassell, professor and chair of the SILS Diversity Committee, acknowledged and thanked the graduates for their commitment to improving diversity at SILS. It was through their extraordinary efforts to improve the diversity climate that they received the Diversity Advocate Certificate Awards. The recipients included:  Sofía Becerra-Licha, Erin Carrillo, Billy Cook, Sarah Dooley, Michael Hughes, Liz Johns, Susan Metallo, Jennifer Scully and Madeline Veitch.

Dr. Jaime Arguello, assistant professor, presented the 2011 - 2012 Dean's Achievement Awards to Cheryl Thomson for her paper “Answering the Call for Data Curation: An Exploration of the Careers of LIS Professionals Managing Data.” Her advisor was Dr. Joanne Gard Marshall. The other recipient was Hannah Pierce for her paper “A Content Analysis Study of the Equivalency of Publishers’ Easy Reader Leveling Systems.” Hannah’s advisor was Dr. Brian Sturm. The Dean's Achiement Awards are presented to students who produce the highest quality masters' papers. 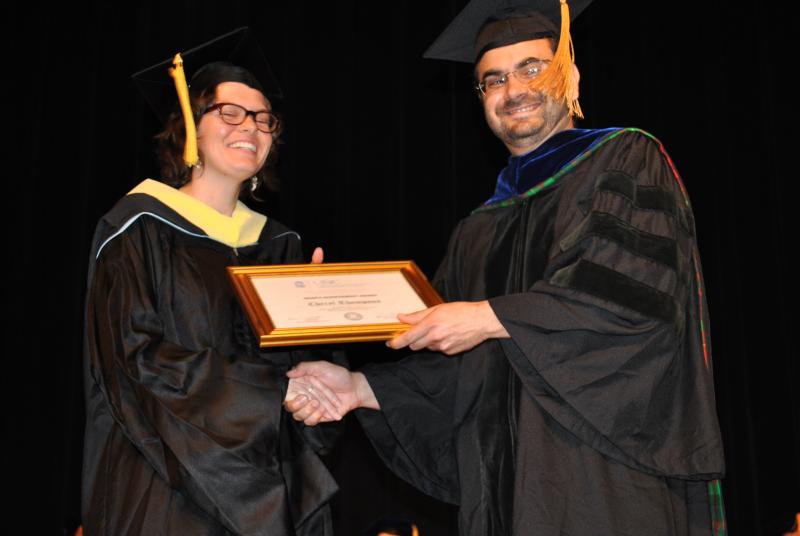 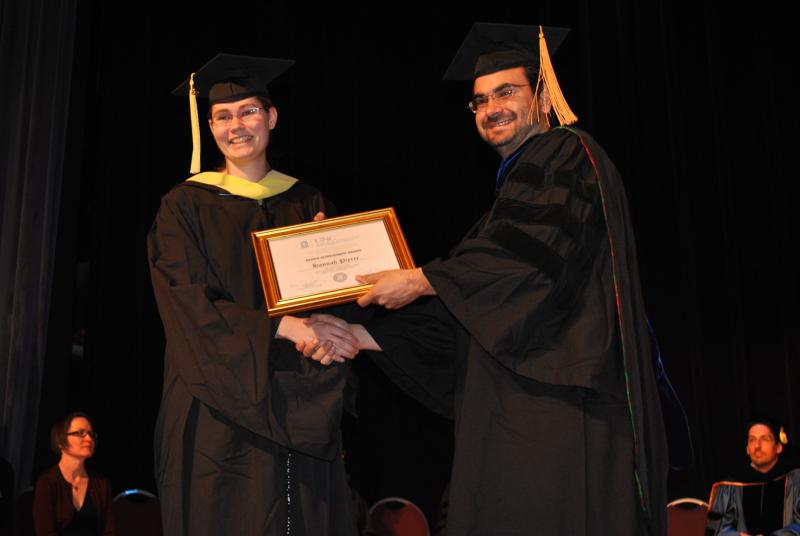 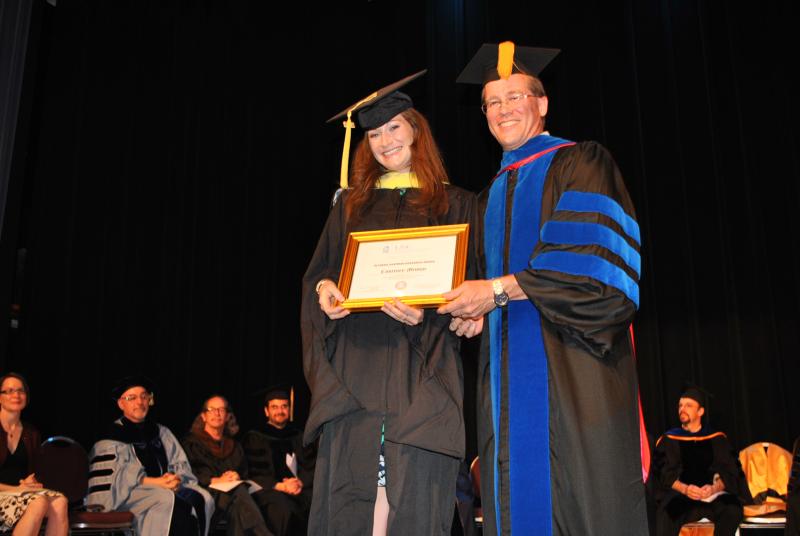 The Elfreda Chatman Research Award was presented at the beginning of the semester so the recipient could use the funds for her research paper. Dr. Brian Sturm, associate professor, presented the certificate and acknowledged the award that went to Courtney Minton for her proposal titled, “The Effect of Poetry Promotion in Elementary School Libraries on Poetry Use Among Students.” The Elfreda Chatman Award was created by the SILS Alumni Association in 2002 to honor Dr. Elfreda Chatman's interest in original research. Chatman was a former member of the SILS faculty. 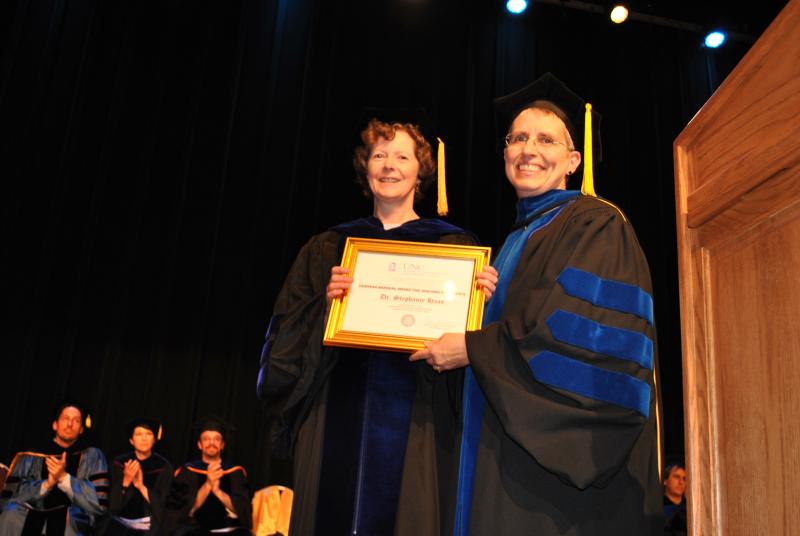 "The person selected for the award has been called dedicated and a most giving and capable mentor, always prepared, but when the classroom inquiry diverges from her prepared materials, she follows the trail," said Wildemuth while describing points made from the nomination letters from Dr. Haas' students. "She is credited with having a unique ability to blend 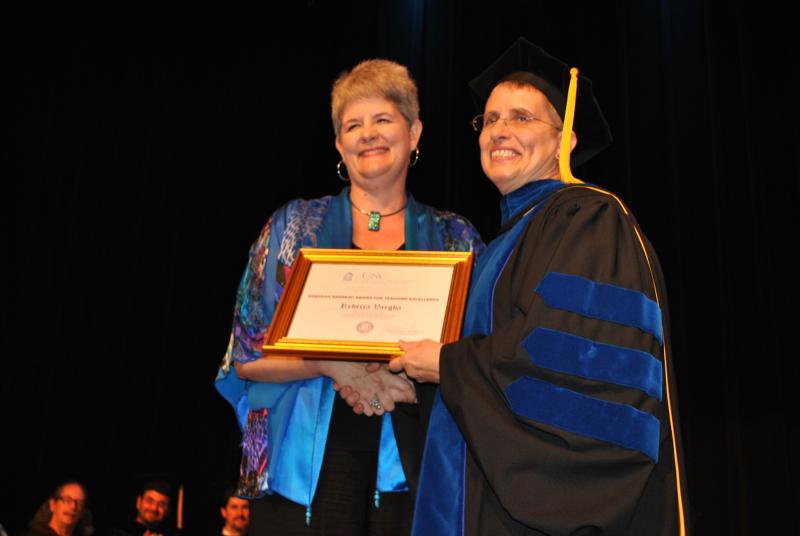 encouragement and intellectual nurturing with a results orientation and incisive editing of ideas. She listens, and thinks about what her students bring into the classroom, responding creatively to each scenario."

Dr. Wildemuth then presented the award for part-time teaching to Rebecca Vargha. "Today’s recipient has an incredible ability to create a welcoming classroom environment," said Wildemuth. "This person fosters discussion, fields questions, brings in interesting guest speakers and makes the most of time spent in the classroom. She has been described as, 'thoughtful, responsive and always concerned about her students and their ability to learn the material presented.'"

The Edward G. Holley for the Good of the Order Award is presented sporadically when a person or persons demonstrate an extraordinary ability to put the needs of the School above their own. The award was created in 2009 in honor of Dr. Edward G. Holley who was dean of SILS from 1972 to 1985 and a major figure in 20th century American librarianship. "Dr. Holley instilled strong values which continues at the School today and will carry on into the future," said Dean Marchionini. "He was an inspirational leader who often spoke about the 'the good of the order' and he always stressed the importance of putting the good of the total institution above the individual good of the people who worked there." This year, the award went to two recipients, Drs. Claudia Gollop and Stephanie Haas. 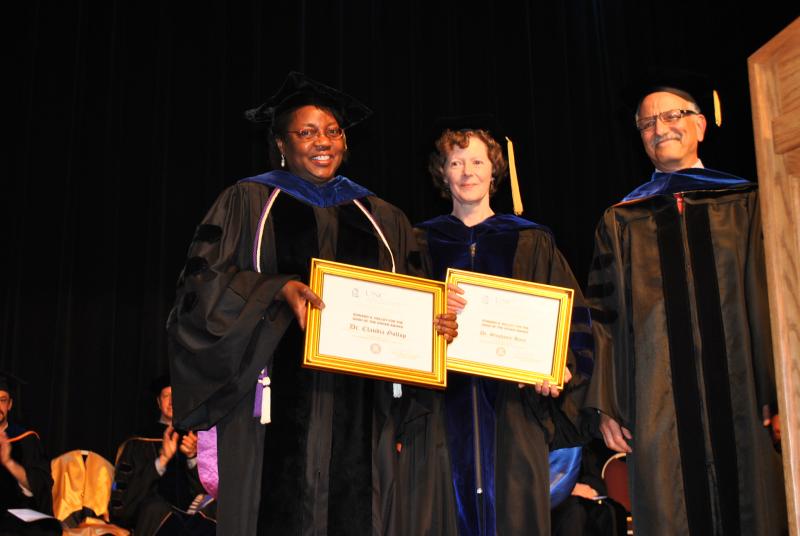 "We honor two people who have demonstrated deep loyalty and compassion to their friend and colleague, Dr. Deborah Barreau, devoting many hours of support that connected her to the School and allowed her to continue to work with her students to help them complete their assignments and dissertations and other tasks for the good of the School," said Marchionini. "These faculty members went over and above anything asked of them during a critical and emotional time to ensure the needs of their ill colleague were met and the School’s academic affairs were in order. They provided understanding and gave selflessly all while teaching their own classes and mentoring their own students for the good of the order."

The professors received a standing ovation and several minutes of ongoing applause for their contributions to the School and to Dr. Barreau.

"We hope you will find this membership useful and that you will engage in activities that benefit future students, yourselves and the School," said Duckett. "The membership is free for life and we would love to see you use it to stay connected to the SILS community." 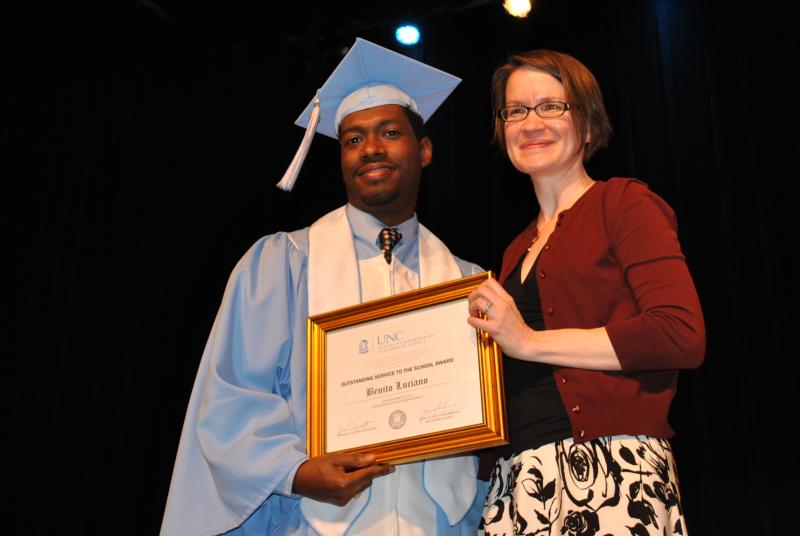 She also presented two additional awards supported by the Alumni Association: the Outstanding Service to the School Award and the Distinguished Alumnus Award.

"This student is well known for not only the quality of his work, but for his technical skills, patience, professionalism and sense of humor," said Duckett. "After seeing the need to help promote the undergraduate program, the student offered his assistance by volunteering to work on a video that highlights the BSIS program. He not only has captured the needed footage for the video, he is also producing it to help the School grow the BSIS program," said Duckett. "As you can easily tell, Benito Luciano (BSIS '12) is an extraordinary student and this year's recipient of the Outstanding Service to the School Award." 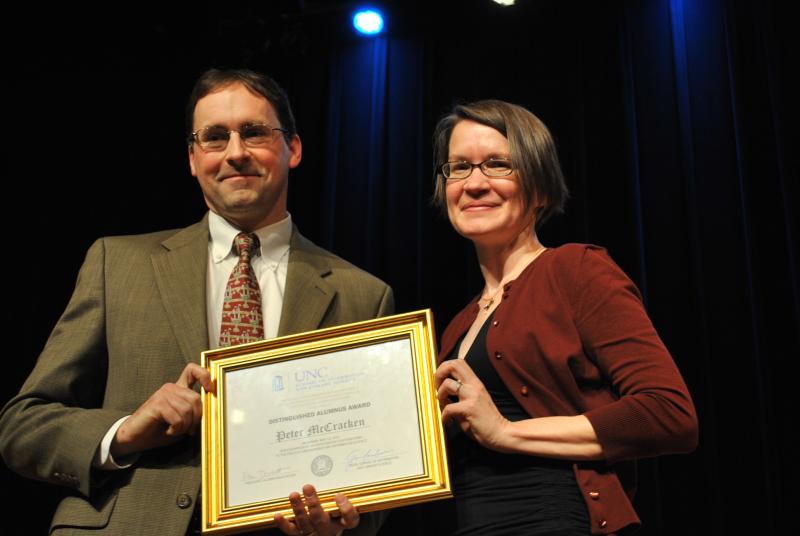 "Peter obtained his MSLS degree in 1995 and has put it to good use, most recently as co-founder and publisher of ShipIndex.org - a Web site that helps people do research on maritime vessels," said Duckett. "The site provides information for genealogists and historians about which books, magazines, Web sites and more, mention the ships they want to know more about. Peter is also the co-founder of Serials Solutions, a product used daily by libraries around the world that significantly impacts the way in which librarians and information professionals provide access to information.

One of his nominators said, “The work that I do would not be possible without the tools that Peter McCracken developed or his advocacy for standards and best practices."

Duckett also shared that the Library Journal had featured McCracken on the cover of one of its issues naming him “Librarian as Entrepreneur.” She also noted that last year the American Library Association’s Library Collections and Technical Services group presented him with the Ulrich's Serials Librarianship Award for his “leadership, diligence and dedication to improving tools and methods to make digital information databases more accessible and understandable for librarians and users.”

McCracken thanked Duckett and the Alumni Association for the award and he said he was grateful to have an opportunity to finally thank his grandmother whom he had failed to thank when he won the Outstanding Service to the School Award when he graduated in 1995. He wished the graduates well with the hope that they have as much success as he has had with the degree that has taken him so far in his career. 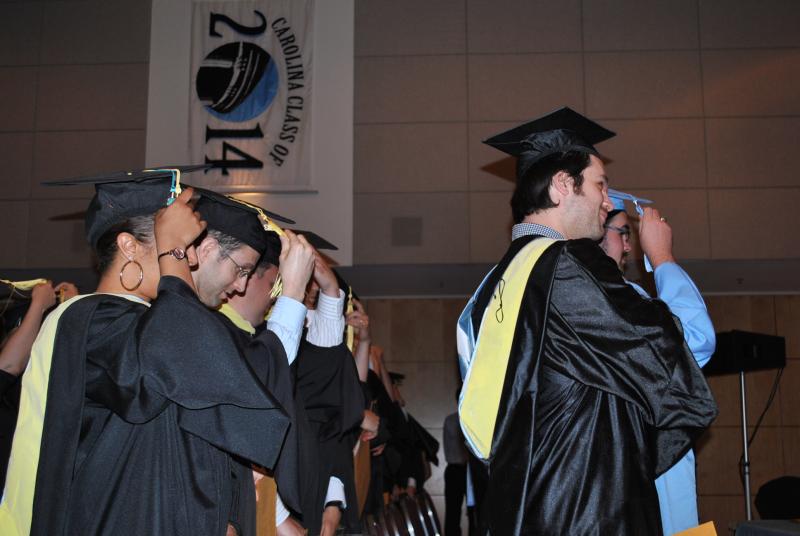 Kaitlyn Murphy, undergraduate student services manager, began the recognition of degree recipients by calling the names of those receiving the BSIS degrees. Lara Bailey followed by calling the names of all who were receiving graduate degrees, both MSIS and MSLS. The doctoral students were hooded by their faculty advisors. (The program for the day can be accessed here.)

Dean Marchionini closed out the ceremony by asking the students to turn their tassels. A reception was held immediately following the ceremony.

Photos prior to, during and after the ceremony may be downloaded from the SILS Flickr account at: http://www.flickr.com/photos/uncsils/ 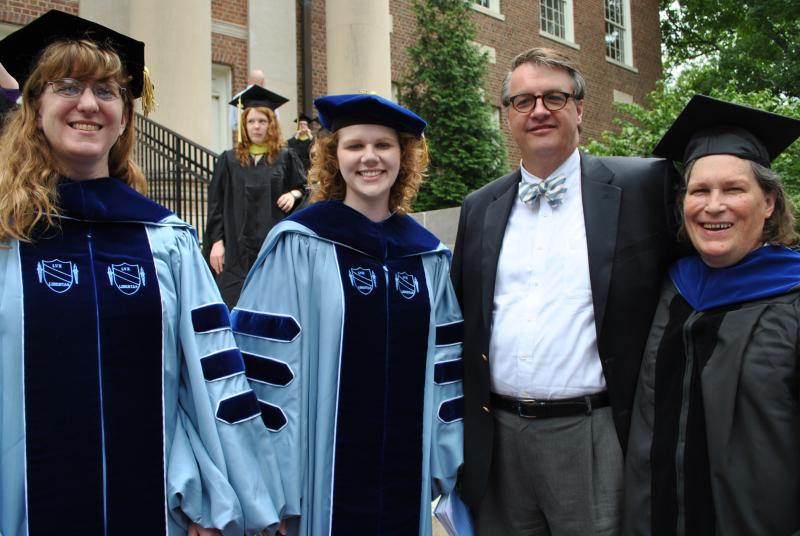 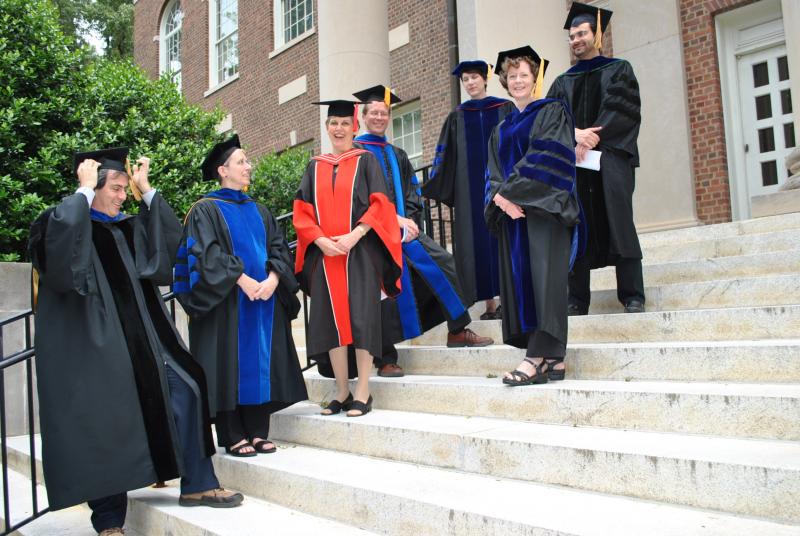 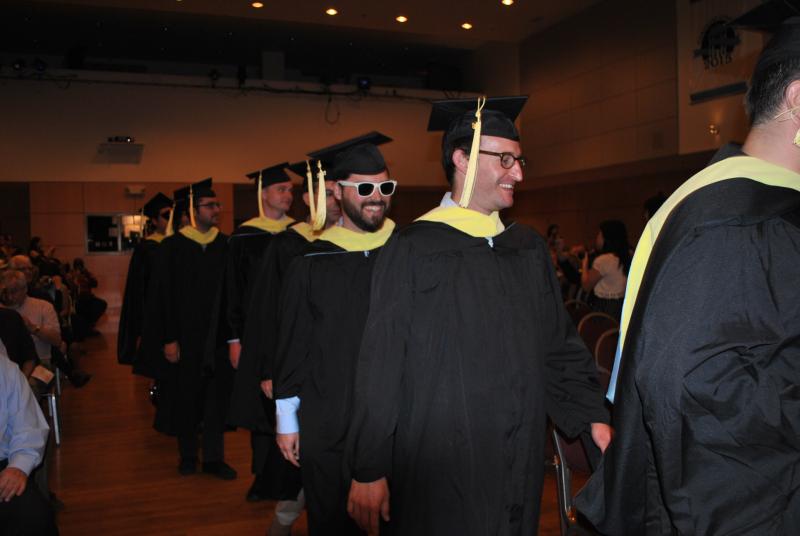 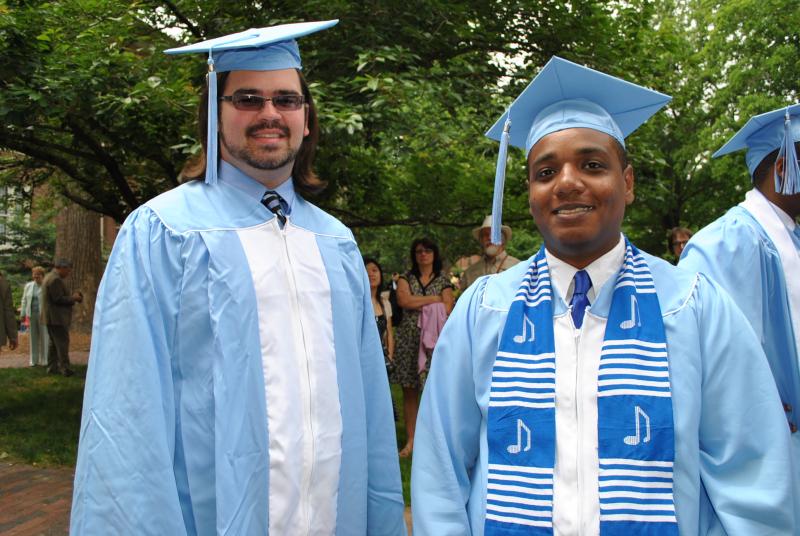 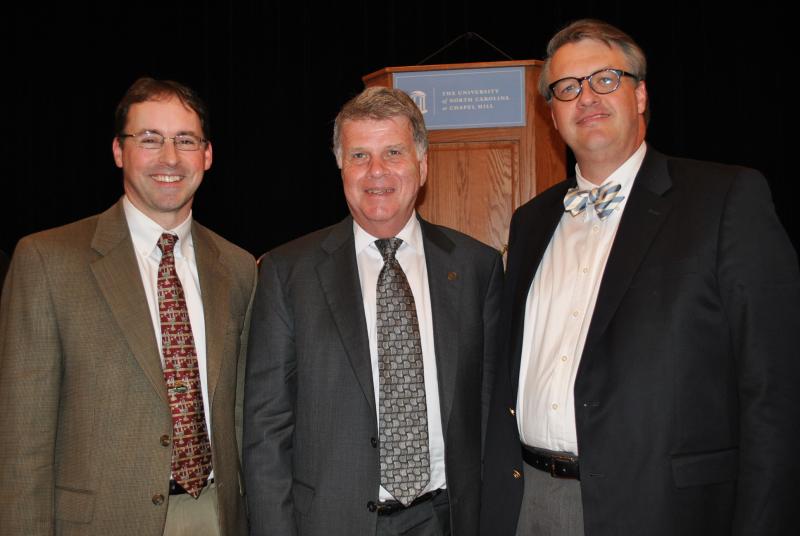 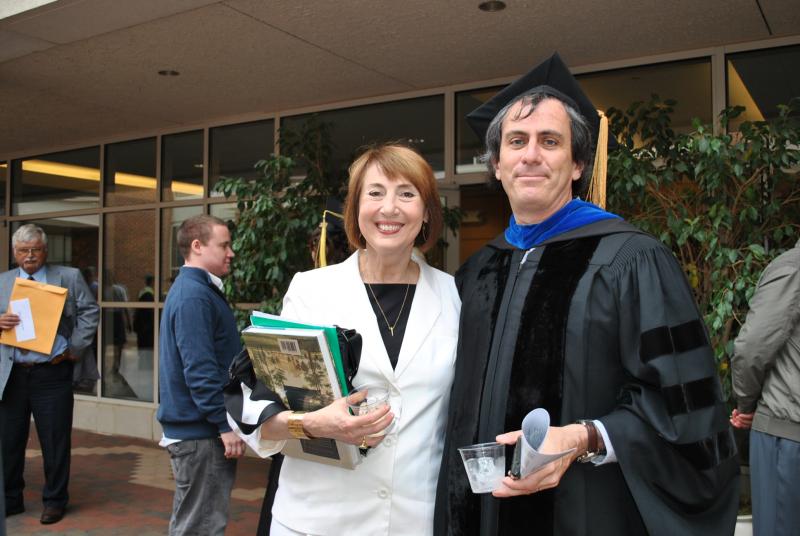