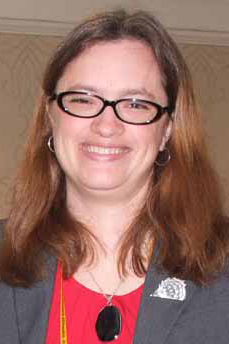 The prestigious Watson Davis Award, presented each year by the American Society for Information Science & Technology (ASIS&T), will go to K.T. Vaughan (MSLS '01), an alumna of the University of North Carolina at Chapel Hill School of Information and Library Science, education services librarian at UNC's University Library and adjunct professor of Pharmacy at the Eshelman School of Pharmacy.

Established in 1975, the Watson Davis Award commemorates the memory and legacy of ASIS&T founder Watson Davis. It is given yearly to a single ASIS&T member who demonstrates outstanding continuous contributions and dedicated service to the Society (with an emphasis on the words "continuous," "dedicated" and "service").

Vaughan has been an active member of ASIS&T since 1999 not only contributing her time and energy as a member, but by taking on many leadership roles over the years.

"K.T. is an outstanding information science professional who has provided exceptional service to the ASIS&T organization," said Heather D. Pfeiffer, chair of the Watson Davis Award Jury, and Ph.D. in the Klipsch School of Electrical and Computer Engineering, New Mexico State University. "She has done an incredible job of demonstrating, and continues to demonstrate, her impressive commitment to the profession of information science. It is clear that she brings a high level of dedication and quality not only to her day-to-day position that includes sharing her wealth of knowledge with students, faculty and colleagues, but also to the overall profession by working and leading multiple groups and committees from the SIG STIS, to both Constitution and Bylaws and Leadership Development Committees, and served as director at large on the ASIS&T Board of Directors by being the SIG Cabinet Chair."

"K.T.’s generosity in sharing her leadership talents for the good of the ASIS&T organization, while demonstrating her continuous dedication as a driven member and leader through her active participation in the various programs, committees and publications, shows her superb leadership and her ability to motivate others," said Dr. Gary Marchionini, dean and Cary C. Boshamer Distinguished Professor and former president of ASIS&T. "She is an inspiration to all with whom she collaborates and to those she has helped educate about our profession."

Vaughan will receive the award at the Annual Awards Luncheon held during the ASIS&T annual meeting in October 2012.

"I believe in libraries and everything they can do to make a community stronger. And librarians and library staff are at the heart of that serve. We make it happen."
-Jennifer Lohmann (MSLS'06)