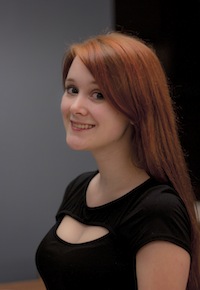 Next month, SILS Master’s student Lisbeth Wells-Pratt will be awarded the Brooks McNamara Performing Arts Librarian Scholarship at a ceremony in New York City. Awarded by the Theater Library Association (TLA), Lisbeth will collect her award at a gala ceremony at one of the world’s most hallowed venues, the Lincoln Center.
The Brooks McNamara Scholarship will be awarded at the TLA’s 75th Anniversary and Awards Gala, which is to be held on the Lincoln Center campus at the New York Public Library for Performing Arts. According to the TLA’s Website, the scholarship is awarded to acknowledge “the outstanding professional accomplishments of promising students currently enrolled in MLS or archival training programs specializing in performing arts librarianship.” The award is named for Brooks McNamara, a former professor of Performance Studies at NYU and founder of the Shubert Archive.
Coming from a background in theater, Lisbeth came to SILS with an interest in the American Theater Archive Project and in issues surrounding avant-garde theater archives. In addition to being president of the SILS chapter of the Art and Museum Library and Information Student Society (AMLISS), Lisbeth works as a librarian through a fellowship at the Environmental Protection Agency Library in Research Triangle Park.
"I feel really fortunate and proud to be a SILS alumna. The school helped me gain knowledge in major areas of librarianship. It prepared me to succeed in different professional positions and roles.”
-Vesselina Stoytcheva (MSLS'99)