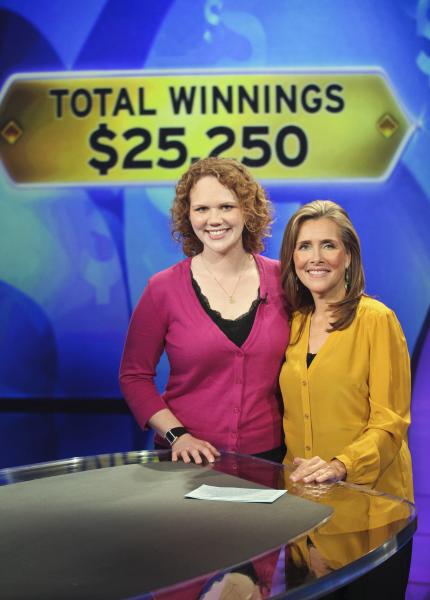 Amber Cushing (Ph.D. “12) had a chance to become a millionaire when chosen as a contestant on the television game show, “Who Wants To Be A Millionaire.” She chose to walk away with $25,250 after answering six questions accurately. Out of lifelines and unsure of the answer, Cushing decided to walk away with half of her accumulated Millionaire Bank, which had risen to $50,500. If she had guessed incorrectly on the seventh question, she would have fallen back to $1,000 in winnings.

Cushing, an alumna of the School of Information and Library Science at the University of North Carolina at Chapel Hill and library director at Allenstown Public Library in Suncook, New Hampshire, played the game on the episode that aired Monday, May 13, 2013.

She said she had seen advertisements for contestants while working out at the gym shortly after moving back to New Hampshire upon her graduation last spring. She decided to check into it.

“Being on a TV game show was on my bucket list, and I had never tried out before so I thought it would be fun,” said Cushing. “I love trivia and have a great memory for facts, which I thought might come in handy.  I actually used to go to a pub trivia semi-regularly in Durham.”

Cushing auditioned for the show last August while visiting a friend in New York City. She went through three stages of interviews, one which required her to complete a timed Scranton quiz. After being among the approximately 10 percent of those who passed stage one, she went on to stage two of the process which was an interview. Cushing passed onto the screen test at which point she was asked questions on camera.

“I talk through my thoughts all the time - just ask the poor souls who shared the doctoral office with me,” said Cushing. “That's something the producers of the show like, people who talk through their answers.”

After going through the audtions, she was told that it may take up to two years to be called as a contestant. Early in September, Cushing received a postcard informing her she was in the contestant pool. She filed the postcard away without too much thought. She was called by producers on September 21st and was asked to be in New York a few days later to go over makeup and wardrobe. She was allowed to bring one guest so she took her mother with her.

“They took our phones, any electronic devices, books, newspapers, magazines, notes and anything that could be considered an "aide," she said. “So I actually spent most of the day in the green room watching back episodes of Millionaire. But I was with other highly creative people who like games as I do, so we created a Pictionary™ game and then made it harder with new rules.”

Cushing said that all of those associated with the show were very helpful and nice. She also noted that she was nervous, but since she couldn’t see the camera while looking at the game screen, she pretended it wasn’t there. She said, “I'd say it’s not much more nerve wracking than a tenure track job interview!”

Currently hosted by the Emmy Award-winning Meredith Vieira, "Millionaire" is syndicated nationally. For more information about “Who Wants To Be A Millionaire,” go to http://www.millionairetv.com.