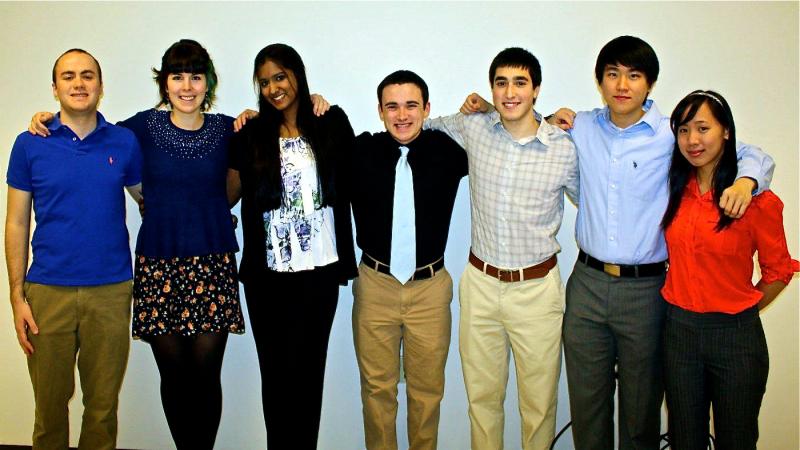 Board members pose for a photo. From left to right are Graham Lombardi, Kristen Brews, Pooja Chandramouleeswaran, Andrew Stowe, Jacob Massey, Edwin Yun and Sharona Yen. Not included in the photo is new board member Alaina Sajatovic.

Many undergraduates in SILS' BSIS program have an entrepreneurial spirit, and now there is a student group that will help them network with like-minded peers in the Kenan-Flagler Business School.

The Undergraduate Business-Technology Club is the newest of SILS' active, diverse student groups. Kristen Brews, a BSIS/Business double major, founded the group in April 2012, and it became an official club last fall. Two of the club's other officers, Pooja Chandramouleeswaran (vice president) and Graham Lombardi (treasurer), are also BSBA/BSIS students.

"For a long time, I've been passionate about technology (especially the strategy and client-facing aspects), but figured I couldn't get a job in the field because I didn't study computer science," said Brews. "After chatting with several people in the tech industry and within SILS, I realized that there was, indeed, a place for me within technology - as a bridge between developers and users."

"The club primarily evolved as a means for connecting with other business/information science/computer science students," Brews continued. "We want to share the fact that companies are hiring students with our skills set - with a foundation in programming and systems analysis as well as traditional business topics (finance, marketing and so on). Additionally, I wanted to aid my peers in finding internships and post-grad employment, and figured the club would be an excellent platform to host speakers, discuss industry trends and generally trade best practices for the job search."
The Undergraduate Business-Technology Club had its first event of the spring late in January, featuring the managing director of the Triangle Startup Factory. Brews, her fellow officers and the group's staff mentor, Undergraduate Student Services Manager Kaitlyn Murphy, hope to host further such networking opportunities in the future.
"When you think about a SILS grad, you think of a leader in the profession.”
-Meredith Evans (PhD'06)