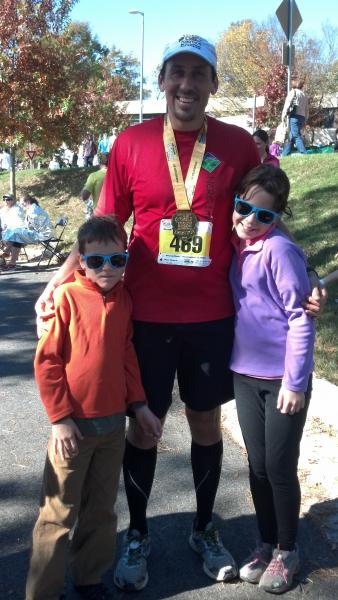 While many people have been pulling out their fall clothes and looking forward to lazy nights by the fireplace, UNC School of Information and Library Science (SILS) Frances Carroll McColl Term Professor Christopher (Cal) Lee has been dressing up in exercise gear and getting active.

On November 3rd, Lee completed the City of Oaks Marathon in Raleigh, NC. This 26.2 mile race is held annually, and proceeds from this year’s race benefited the Leukemia & Lymphoma Society, the Rex Healthcare Foundation and the YMCA We Build People Program.

Lee decided to run in this race, his first marathon, after completing a half marathon earlier this year. He began his training for the City of Oaks marathon immediately after registering over the summer.

“Training involved a variety of runs throughout the week, with some recovery days, and then one long run each weekend,” said Lee. “The long runs got progressively longer over time until the last couple weeks when I tapered my distance to let my body prepare for the big race.”

Lee feels that finding time to train each week was one of the hardest parts of preparing for the marathon. He is not new to training and races, though, as he has been running for over a year now.

“My first running event was a 5K with my daughter in the spring of 2012 as part of Girls on the Run,” Lee said. “I’ve done several  5Ks with her since then. I ran the Super Cooper 5K on my own in Southern Village in the fall of 2012. In April of this year, I ran in the Tar Heel 10-miler in Chapel Hill. Then in May, I ran the North Carolina Roadrunners Club Invitational Half Marathon in Cary. I ran Urban Wildland Half Marathon on August 3 in Richfield, Minnesota.”

Despite his running experience, Lee still did his research in order to be as prepared as possible for the race day. After registering for City of Oaks, he read numerous books and articles and even watched movies pertaining to the sport. In doing so he learned valuable information about the strategies and science of running, such as the best timing and quantities for consuming food and drink while running. He also learned valuable training strategies.

“I’ve learned that training for a marathon has to happen one step at a time,” Lee said. “I didn’t just double my capacity immediately. Instead I built up my long runs incrementally, so the increase in miles from one week to the next was never overwhelming.”

After all the training and research, Lee was able to complete the marathon in a little under four hours and four minutes.

“When I finished the half marathon, for example, I was completely exhausted and couldn't imagine how I could run twice that far.  But I decided that I certainly couldn't do it if I didn't sign up for one, so that I had a reason to try,” said Lee. “The hardest part of the race was around miles 20 to 24. There were several up-hill climbs, and I was already pretty worn out. When I crossed the finish line I was tired and sore, but very excited that I managed to run the whole thing.”