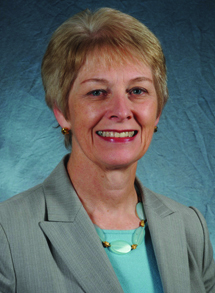 Carol Jenkins, professor of practice at the UNC at Chapel Hill School of Information and Library Science (SILS) and director of UNC’s Health Sciences Library, has announced her retirement after 26 years at the helm of one of the nation’s leading health and medical libraries. Her final day on the job will be June 30, 2013.

“Carol leaves a legacy of leadership and innovation,” said University Librarian and Associate Provost for University Libraries Sarah Michalak. “Her outstanding career and tireless passion have advanced the provision of health information on campus, across the state, around the country, and throughout the world.”

Only the third professional librarian to lead the Health Sciences Library (HSL), Jenkins oversaw numerous developments. Under her leadership, the HSL became one of the first libraries to provide access to MEDLINE and other key databases to users anywhere on campus. During her tenure, the HSL instituted the AHEC Digital Library, providing online books, journals, and databases to health professionals across the state, and NC Health Info, a unique consumer database of authoritative health sources and local resources.

At UNC, Jenkins also oversaw and extensive renovation of the Health Sciences Library in 2005, adding spaces and technology to meet changing needs and expectations of library users.

In 2010 the HSL was administratively joined with the University Library. Jenkins has co-chaired a new joint strategic planning process that focuses on a new vision for twenty-first-century library services.

Jenkins’s awards and accomplishments include serving as president of the Association of Academic Health Sciences Libraries (2001) and the Medical Library Association (2002), and leading two programs to identify and mentor future library leaders. She was a founding member of BRIDGES, a program begun at UNC to prepare women for academic administrative leadership.

In an e-mail to HSL librarians and staff Jenkins wrote, “One of the accomplishments of which I am most proud is being able to recruit and work with such a wonderful staff.”

Jim Curtis, deputy director of the HSL, will serve as interim director until a replacement is named.