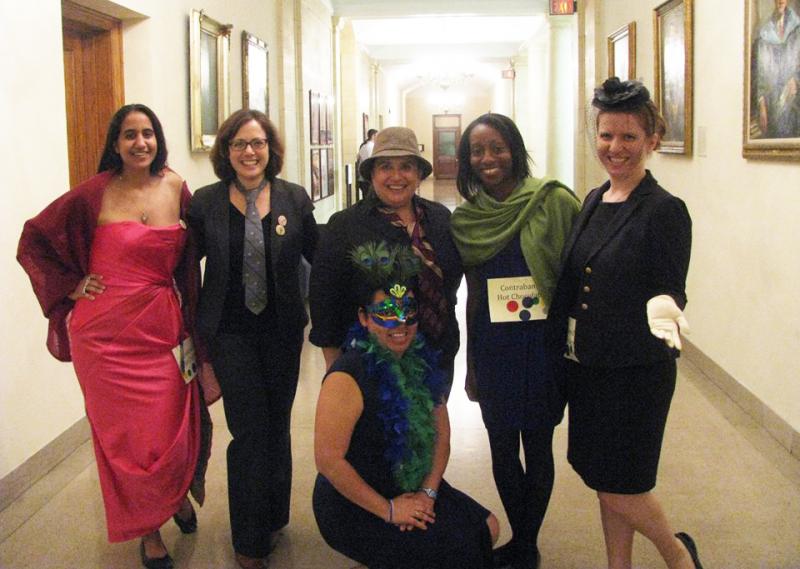 SILS doctoral students solved the "who done it" mystery while playing Clue at the Wilson Library. From left to right, Sarah Ramdeen, Gabriele Patsch, Angela Murillo, Ashlee Edwards, Emily Vardell and in front on the floor is Brenda Linares, who was the character/culprit in the game.

UNC at Chapel Hill School of Information and Library Science doctoral students were immersed in a live game of Clue Wednesday, October 30, 2013 in the Wilson Library and immerged as winners of the game. The teams of students scored points and solved the mystery after they interrogated Clue characters, answered questions and gatheried evidence.

The winning team was Contraband Hot Chocolate, which included: doctoral students Ashlee Edwards, Angela Murillo, Sarah Ramdeen and Emily Vardell. Also with the team was Gabriele Patsch, visiting scholar to SILS from the University of Hildesheim in Germany. Included in the photo is Brenda Linares, librarian at the UNC at Chapel Hill Health Sciences Library, who was a character in the game, providing clues to the participants. Her character was also the one "who did it." The SILS team concluded she was the guilty party. The team won gift cards from local businesses and enjoyed pizza and soda.

The fun event, which also included a costume contest, was sponsored by the Friends of the Library, the Residence Hall Association, Wilson Library and the R.B. House Undergraduate Library.