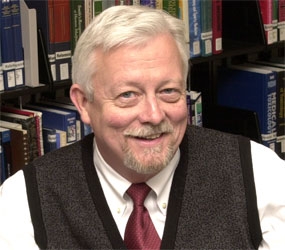 “I am delighted to have the opportunity to lead this great library, which is one of the very best of its kind in the country,” said Curtis. “I look forward to continuing to build on the strengths of the Health Sciences Library during my tenure as interim director. As I look back on my career as a medical librarian I can’t help but be grateful for the excellent professional preparation that I received at SILS. I would not be where I am today without the inspiration and the values I gained from my experience and the faculty of the School.”

Curtis has a total of 33 years of experience in librarianship, including 19 years working in three different administrative positions at the HSL beginning in 1990. He left UNC in 2004 to serve as director of the Savitt Medical Library at the University of Nevada’s School of Medicine in Reno, NV, where he also was a professor in the School of Medicine and head of the school’s Information Technology Services.

Curtis is the current chair of the Leadership and Management Section of the Medical Library Association (MLA), a former member and chair of the Lindberg Research Fellowship Award Jury and served for three years on the North Carolina Library Services and Technology Act Advisory Committee. In 2010 he published several major articles focused on evidence-based medicine and possible roles for librarians and library resources with the implementation and maintenance of electronic health records. He is a member of the Librarians Association of UNC-CH, the Mid-Atlantic Chapel of MLA, the University Managers Association and MLA.

During his time at SILS, Curtis was president of the Library Science Students Association, an audiovisual assistant and a member of the Block, a curriculum innovation at the time that allowed students to learn in a professional setting. He is also a member of the Epsilon Chapter of Beta Phi Mu, the library honor society. Curtis received a Bachelor of Arts in European History from the University of Illinois at Urbana-Champaign.

Curtis replaces Carol Jenkins who recently retired from the director position at HSL which she held for 26 years.