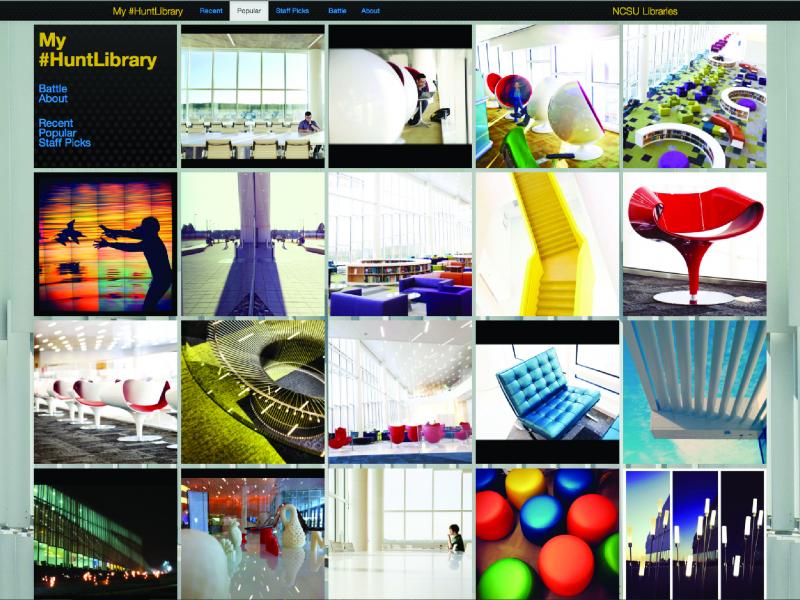 What began as an effort to capture photographs of the new James B. Hunt Jr. Library at the North Carolina State University Libraries for its grand opening earlier this year, has resulted in an innovative and popular way for students, faculty, staff, alumni and visitors to incorporate their views of the library from camera phones to large images on the Library's new visualization walls.

"I had been thinking about how we could crowdsource our social media publicity strategy for the new Hunt Library and Jason had been experimenting with using the Instagram API to find images about student life at NC State," said Nutt. "The idea for My #HuntLibrary quickly evolved into a project after a meeting where the two of us discussed our mutual interests in building digital collections from student-created social media artifacts." 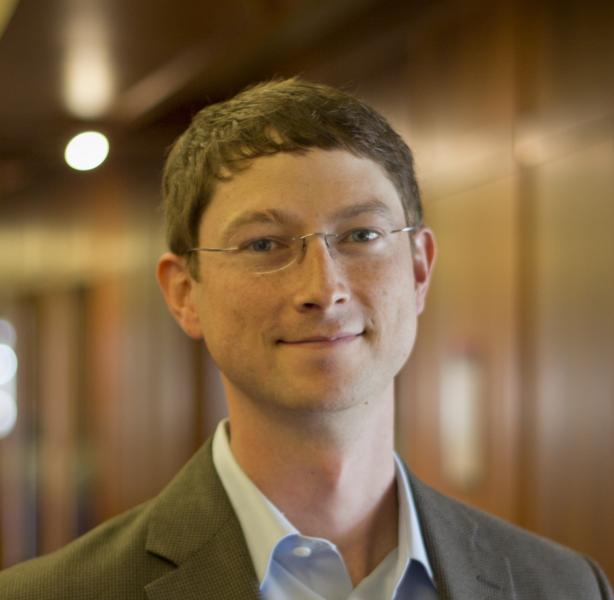 Nutt states that after My #HuntLibrary was deployed for the opening activities, Casden and his digital services development team took the lead on opensourcing their work as lentil. That software development team also includes SILS alumnus and digital technologies development librarian Cory Lown (MSLS '08) as well as their colleagues Bret Davidson and Jason Ronallo; Brian Dietz and Todd Kosmerick of Special Collections; Jennifer Garrett, Visitor Experience; and others who helped in various ways.

The Hunt Library is making lentil available for free. The open-source solution allows libraries and other organizations to quickly build, moderate, administer and display collections of photographs posted to Instagram. A great way to capitalize on the enthusiasm of library supporters, to build special collections based around a topic or event or to invite participation in evaluating a library program, lentil provides an easy-to-deploy software package to capture and put to use the power of today’s smartphone cameras and social media tools.

My #HuntLibrary allowed visitors to show their pride in the Hunt Library by photographing their favorite spaces and activities in the building and then vote as a community on their favorites through “likes” and a “battle” feature.  In a great testament to the new library, over 2,600 photographs were submitted to the site.  Created with responsive Web design principles, the software allowed users to view the collection on screens ranging from four inches to the huge large-scale visualization walls that dominate the Hunt Library.

"We have all been delighted and humbled by how well the project was received," said Nutt. "The success of My #HuntLibrary is evident in the number of photographs that have been contributed: over 1000 photographers have submitted 2600 images tagged #HuntLibrary. Those images will also be added to NCSU Libraries' official University Archives, which means that we enabled over 1000 people to contribute to the historical record of NC State, many of them students. We hope that by crowdsourcing our code, we can start a larger conversation in the library world about how to use tools like this to increase the diversity of materials that make up our digital collections. And, the project was a ton of fun!" 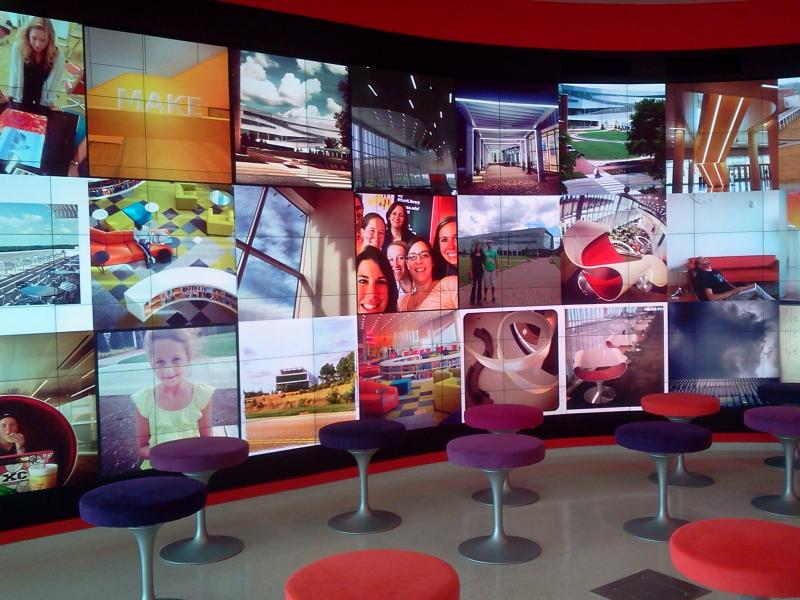 "One of my favorite parts of the project is the use of core library practices (in this case, digital special collection development and preservation) as a student engagement activity," said Casden. "We hoped that we could use this project as a platform for learning about new ways of opening up university historical documentation to students and other members of the campus community, and that the long-term collecting goal could even serve as an incentive for participation. During a small series of user interviews, we were astonished by the enthusiasm that students expressed when asked how they felt about their Instagram images being preserved. One student even said that this was more exciting than winning an iPad Mini."

The core of the code for the My #HuntLibrary project is now available in the lentil package, giving users a simple, inexpensive way to create similar projects. The lentil Rails Engine framework can:

• harvest image files and metadata from Instagram
• allow an administrator to moderate and add items into the collection
• create an interactive, responsive browsing platform with multiple browsing alternatives
• allow users to select their favorite images by “liking” photos or voting them higher in the image stream by comparing them in a “battle” vote tool
• submit agreements to contributors to get their permission to reuse images for additional promotional or research purposes

Lentil-based applications can be quickly customized and deployed to any Rails-capable Web server, including Heroku. For more information, see the blog.

The free lentil software is available at https://github.com/NCSU-Libraries/lentil. For more information about the software, please contact Casden at (jason_casden@ncsu.edu).